An Android VPN stops you being tracked by your ISP and the government. This means you can do anything online in privacy. A VPN for Android also stops businesses tracking you on public WiFi, and eliminates tracking by your employer at work. You can also access restricted websites at school, at work, or anywhere else. Android VPNs encrypt your data to let you access censored content in secret.  And a VPN conceals your real IP address so you can pretend to be in a different country to bypass geo-restricted services such as BBC iPlayer or Netflix US. A VPN for Android also protects you from hackers on public WiFi.

Our experts have carefully analyzed the market to find the 5 best Android VPN apps below.

The best VPN for Android Apps

Want the best VPN for Android? Check out the in-depth list below. We have reviewed hundreds of VPNs in order to find the best service for your needs. If you need more information about any service, check out our VPN reviews.

ExpressVPN is one of the most respected names in the VPN industry. Along with the now industry-standard 30-day money-back guarantee and efficient 24/7 live chat support, ExpressVPN pioneered the idea of “one-click connect” in its mobile apps. 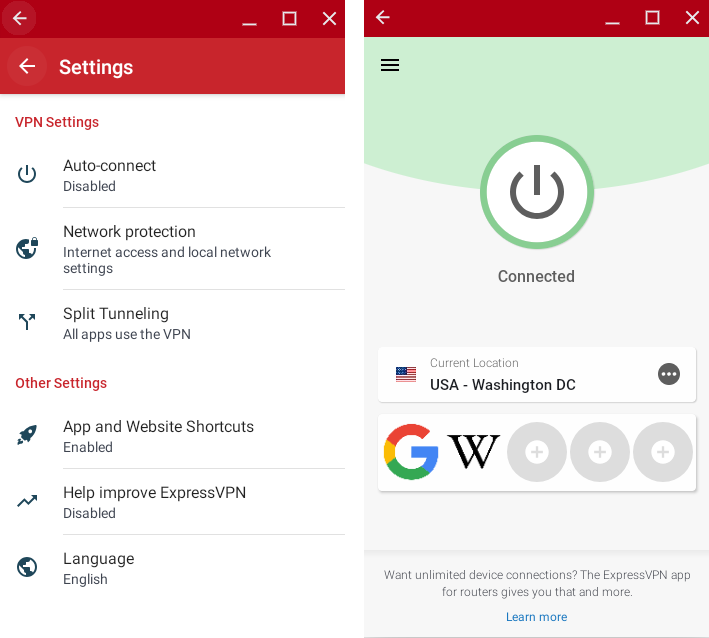 Its Android app has a 4.1 star rating in the Play Store and is compatible with all Android 5.0+ devices. It can be downloaded from either the Play Store, or, for the more Google-phobic out there, as an APK file for sideloading onto your device. ExpressVPN provides L2TP/IPSec setup instructions for users of Android versions 2, 3, and 4.

The app is easy to use and offers split-tunneling, which allows you to decide which of your apps use the VPN tunnel and which don’t. It also features a kill switch (called “network protection”), which is something we wish more Android VPN apps would include.

ExpressVPN is a no-logs VPN service with servers in over 90 counties and a strong focus on privacy.

This no-logs VPN service is based in NSA-free Panama. Its Android app has a very respectable 4.3-star rating on the Google Play Store and is compatible with all Android 5.0+ devices. 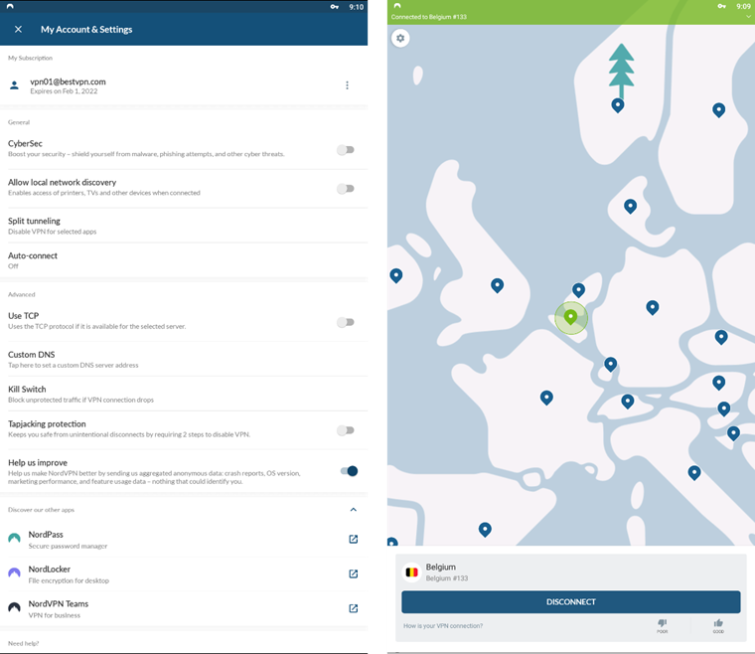 The app is distinctive looking thanks to its dynamic map of server locations. It uses OpenVPN in UDP mode by default, although TCP (presumably using port 443) is an option. In addition to this, the app allows you to connect to NordVPN’s special Obfuscated servers, which use XOR encryption to evade VPN blocks.

The app also sports a kill switch and  NordVPN’s “CyberSec” feature. As with its desktop apps, this uses a DNS blocklist to protect users from malware, help prevent botnet control, and block many intrusive web ads.

As is increasingly common, its APK is also available to download directly from NordVPN website, which will auto-update when new versions become available. This is perfect for those who wish to avoid the Google Services Spyware Framework.

This no logs VPN service is registered in the British Virgin Islands and offers an Android 5.0 app rated 4.3 stars in the Play Store. We are pleased to see that you can also download the APK direct from the Surfhark website. 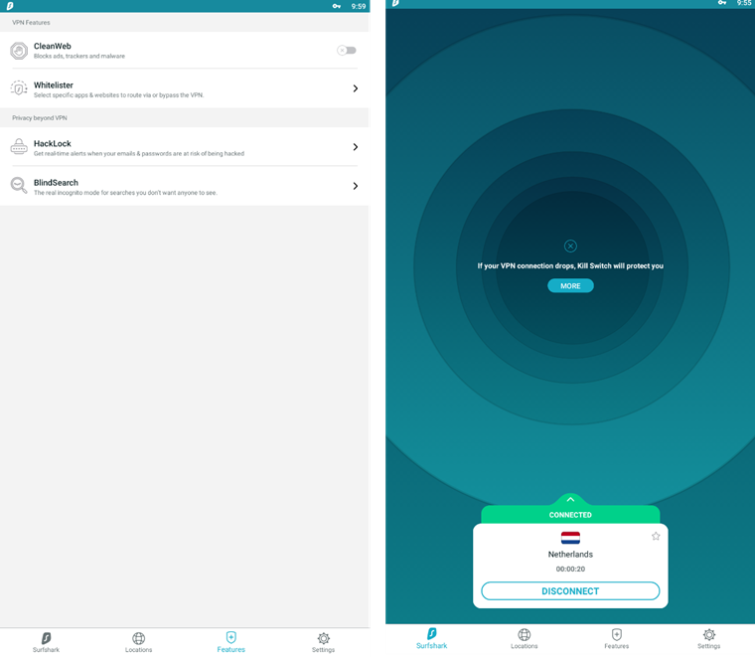 SurfShark has always impressed us with the amount of bang it offers for your buck, and its Android app is no different. It includes a kill switch, split-tunneling (“Whiltlister”) for apps that you want to exclude from the VPN, a DNS adblocker, an incognito mode for web searches, and even a GPS override feature that ensures your browsers GPS location matches your VPN location.

The Surfshark Android app uses IKEv2 by default, but also offers OpenVPN (UDP and TCP, although port numbers are not specified). It also offers the Shadowsocks protocol for those who need to evade restrictions on VPN use.

This no-logs VPN service is based in Switzerland and is notable for owning its own CDN and server network. The app supports all versions of Android, although 4.0.3+ is recommended. 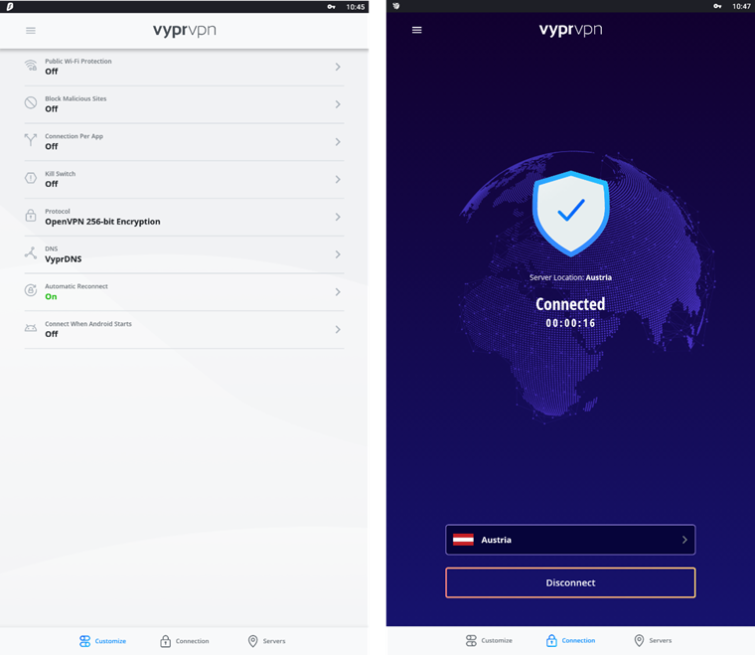 It has a somewhat modest 3.9-star rating in the PlayStore, but has always worked flawlessly for us and is a fully-featured app. Kill switch, DNS ad and malware blocking, and public WiFi protection are all present and correct.

The app uses OpenVPN, and you can configure the port, but not whether it uses UDP or TCP mode. We are pleased to see, however, that the Android App offers VyprVPN’s patent Chameleon encryption technology, which is widely reported to be great at defeating VPN censorship.

The app is available as an APK download in addition to being featured in the Play Store.

IPVanish is a high-profile no logs US-based VPN service. Its Android 4.0.3+ app rates 3.9 stars in the Play Store, but, again, has always worked well for us and is packed with useful features. 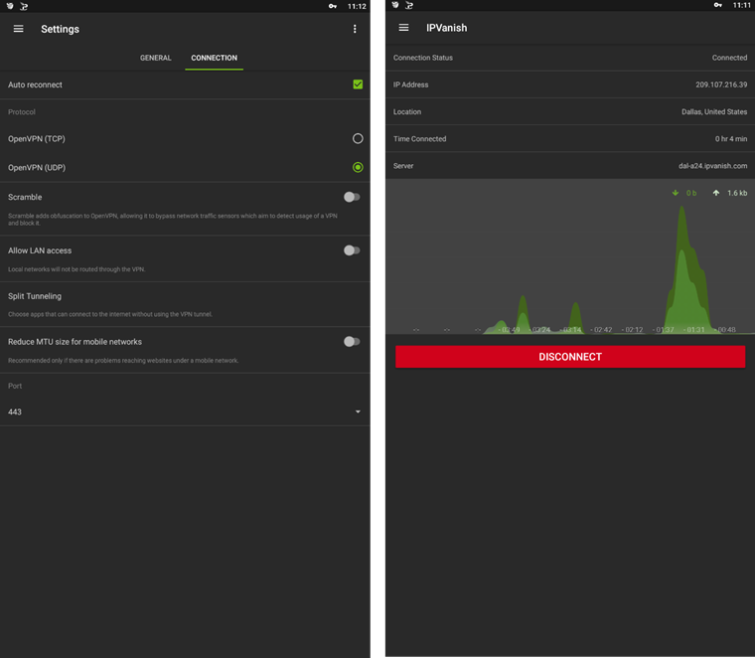 The IPVanish app does not include a built-in kill switch per se., but on Android 8+ devices it provides instructions for enabling Android’s new build-in kill switch feature to work with the app.

The app features split tunneling, insecure network notification, and XOR Scramble obfuscation technology. It uses OpenVPN in either  UDP or TCP mode, and you can select which ports it uses.

Why should I use an Android VPN app?

A VPN app connects your Android device to a VPN server which gives you a different IP address. The connection between your device and the VPN server is securely encrypted, so your Android data is always private and secure both at home and on public WiFi.

You can gain many advantages from using a VPN on Android, including:

With all that in mind - and how cheap a VPN for mobile is - we think everyone should use a VPN!

Is a VPN safe for Android?

A VPN for Android works just like a VPN for PC or a VPN for Mac. If you are new to VPNs, it is probably worth checking out our Beginner's Guide to Virtual Private Networks.

One thing worth considering, is that a VPN for Android phone cannot stop data being sent directly to developers from apps. Phones and tablets send a lot of data back to their developers, which is why it is important to monitor the permissions when you install them. A large criticism of Android is that by default Google almost encourages app developers to abuse the permissions system.

Data sent to app developers can include your phone's unique IMEI number, your GPS location data, your contact list, your Google Play/iTunes ID, and more. A VPN cannot stop apps from doing this.

One solution is to access services using your browser (preferably a privacy-friendly browser), rather than via these purpose-built apps. A VPN will fully shield your IP address from the websites you visit in your browser. Though we do also recommend using browser add-ons to prevent other forms of website tracking.

What features are Important for Android VPNs?

How to set up a VPN on Android?

We now have an entire guide on how to set up a VPN on Android (although – really – it’s not rocket science!). In it, we also discuss things like how to sideload Android VPN APKs, how to enable a kill switch in Android, and more.

Can I use a VPN free on Android?

There are many free VPN apps on the Google Play store. However, a shocking amount of those services track and sell data, contain spyware, and lie about the data privacy (encryption) they provide. Frustratingly, many of those services have been reviewed well by consumers; who don't realize that these things are happening in the background.

If you want a free VPN, follow our link above, which will show you some secure free VPNs you can use without concerns. And remember; no-one is going to run an expensive VPN service completely for free (it's simply not a sustainable business model unless you steal data from users).

There are some decent free apps for Android available, some of which come from established VPN services hoping the free app will tempt you into paying for a premium subscription. Just don’t expect a free VPN app for Android to offer an unlimited service. A trustworthy one will be download capped and have various other limitations. (server locations, bandwidth limits).

Here are answers to some common questions we get asked.

As discussed above, many free VPNs for Android are not at all safe. VPNs from reputable providers (most of which require a paid subscription), however, are very safe. Indeed, they provide all the privacy and security benefits of using a VPN on the desktop.

A VPN Android app can only do what a VPN can do. It cannot prevent third-party apps from using Android permissions to provide their developers with personal information about you. It cannot prevent Google from knowing far too much about what you get up to on your device. And it cannot prevent your ISP logging call and SMS metadata (or even content!) and tracking everywhere you go via cell tower triangulation.

Short answer: install the VPN app from the Google Play Store and run it. Long answer: Please see How to install a VPN on your Android.

Outside of North Korea simply using an Android VPN is not illegal. Restrictive countries such as China, Egypt, and Iran do try to block access to VPN services, but do not criminalize those who try to do so. For more information please see VPN Jurisdiction: Where's best?

No. In fact, a VPN will slow your internet speed, although with a fast VPN this won’t be by much. Maximum speeds are obtained by connecting to a nearby VPN server which is not overloaded.

A VPN app for Android will work whether you access the internet over your mobile data connection home WiFi, or a public WiFi hotspot. Note that unless a kill switch is enabled, then some data may leak when you switch networks, but important data should be protected by HTTPS anyway.