These are the best ad-blockers for iOS

Best ad-blocker for iPhone and iPad: a quick rundown

We have listed the currently best adblocking apps for iOS users in 2023. These services are mostly free with premium features and work on iPhone and iPad.

Best ad-blocker for iPhone and iPad: in more detail

If you want to learn more about the above service, here are more detailed descriptions for each of them.

Total AdBlock offers a super efficient and secure Safari extension for all iOS devices. It's a beginner-friendly ad-blocker that's very easy to install and use, after which it removes all types of online ads – such as banners, pop-ups, and notifications. This ad-blocker works great on all your other devices as well, with plugins for all popular browsers, including Chrome, Microsoft Edge, Firefox, and Opera.

Total Adblock blocks persistent ads across the web, but that's not its only advantage. It also takes care of trackers and third-party cookies, so that advertisers get less opportunity to collect your data and potentially misuse it. In addition to that, without ads and cookies, your overall online experience becomes faster and safer.

Total Adblock was created by an award-winning antivirus provider TotalAV, which makes it a trustworthy option. Besides, with the premium plan, you get to use TotalAV for free – a valuable addition to an already great offer. You get a 30-day money-back guarantee as well, so you can try all Total Adblock's products without risking money. 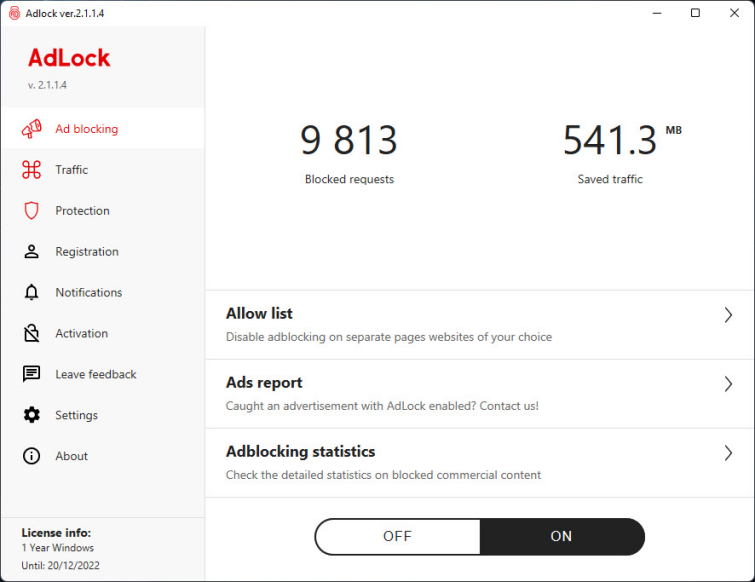 AdLock is a reliable ad blocker that is available for iOS, Android, Windows, macOS, Chrome, and Safari. The iOS version can block ads both on websites and apps, and it can be set up to prevent the loading of annoying scripts such as pop-up chat boxes, for example. A subscription starts at just $16 per year and it blocks all types of ads, malware, and connections to malicious websites. It also prevents trackers to protect your privacy.

Our tests revealed it prevents ads on torrent sites, streaming sites, social media sites, and YouTube. This makes it a superb all-rounder. We also liked that it worked without breaking on-page content such as auto-load videos on news sites. That said, it always prevents advertisement videos while playing games, allowing apps to run more smoothly and without interruptions. It is also good at blocking flashing banners, auto-play ads, timed pop-ups, and unwanted redirects.

Anybody who purchases a plan can use their adblocker on up to 5 devices simultaneously, which makes the subscription great value-for-money. What's more, you get a light and dark theme to ensure you can control the adblocker in the dead of night if you need to (or if you just want to put out those dark vibes). Plus, it does not support the acceptable ads policy, meaning that it blocks all ads mercilessly. You can test it yourself thanks to its 30-day money-back guarantee, and if you have any issues while using it, you can contact its customer support team 24/7! 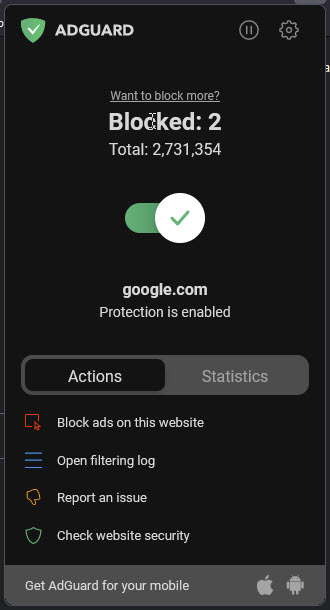 AdGuard is a very popular free and open-source adblocker that also has a Pro version. AdGuard Free does most things you might expect: it blocks ads efficiently and protects your privacy by blocking tracking scripts. You can choose from over 50 popular filter lists, such as EasyList and EasyPrivacy.

An interesting feature of AdGuard is its manual blocking feature which allows you to select elements on a web page (such as an ad it failed to block automatically) and remove them.

Premium users can create custom filter lists and perform system-wide DNS filtering. This is achieved by creating a “fake” VPN connection to any popular DNS service of your choice. Or you can configure your own DNS server. As previously noted, this feature is not compatible with using a regular VPN app.

Adblock is the original adblocker for iOS. In addition to a regular Safari content blocker, Adblock can create a local DNS proxy on your device which performs DNS blocking locally, rather than on a remote server.

In addition to using rules from popular blocklists, you can create custom blocking rules and URL-based blocklists, which you can export and synchronize between devices using iCloud. In order to minimize disruption to your browser experience caused by DNS filtering breaking sites, Adblock supplies a handy widget to quickly enable or disable the DNS proxy.

Firefox Focus is an open-source browser from Mozilla, makers of the popular regular Firefox browser. It is designed from the ground up to improve privacy, a key component of which is content blocking. Its main concern is tracking protection rather than ad blocking, but in order to provide this, it blocks any ads which track you. Perhaps unsurprisingly, this means it blocks most ads.

Although great for privacy, Firefox Focus has limitations as a day-to-day browser. The most notable of these is that website login details are not saved between sessions. Another is that tabbed browsing is not supported in iOS (although it is in the Android version).

It is possible, however, to integrate Firefox Focus’ content blocking features into Safari in the regular way described earlier in this article.

1Blocker has become free – and this updated version of the much-loved legacy 1Blocker app remains very popular. It is a standard Safari adblocker that benefits from doing its job simply but well.

It uses over 115,000 rules to block ads and trackers and features regional rules appropriate to specific countries. It also allows you to add custom rules, which you can protect using Touch ID or Face ID. If you wish to support specific websites you can whitelist them.

The 1Blocker website proudly boasts that independent tests by Wirecutter, NY Times, and BrooksReview have confirmed that the app cuts average data usage by over 50 percent. Which is rather impressive.

How does an adblocker work on iPhone?

The term "ad-blocker" is somewhat misleading because while ad-blocker apps do block ads, their most useful function is to prevent tracking scripts from being loaded into your browser, which allows companies to track your movements as you browse the web. This is why they are also known as "content blockers".

Another benefit of ad-blockers is they can speed up page load times because they prevent the browser from loading unnecessary (and potentially harmful) scripts. For the same reason, ad-blockers reduce bandwidth consumption and so are pretty much essential for those with limited data plans. They also claim to save battery life, although we aren't entirely convinced this benefit will be noticeable to the average user.

The cheapest VPN services if you're on a budget

What is an Ad-Blocker, and Should You Be Using One?

How to stop pop-ups and ads on iPhone

On desktop platforms and Android, the usual approach to blocking ads is to install an ad-blocker add-on for the Firefox or Chrome browsers. Such as uMatrix, Privacy Badger, and/or uBlock Origin.

iOS being what it is, however, installing an ad-blocker on an iPhone or iPad is not so simple. For a start, thanks to the app store’s strict developer guidelines, neither Firefox nor Chrome support browser add-ons in iOS.

This leaves you with one main approach to ad-blocking, use content blocker apps in Safari by installing them and enabling the app in Safari’s settings.

To do this, simply:

Go to Settings -> Safari -> General -> Content blockers and toggle yours on.

Content blocker apps can conflict with one another, so it’s probably a good idea to enable just one at a time. iOS limits ad-blocker apps to 50,000 rules each, however, so many apps (such as AdGuard shown below) run as multiple processes in order to get around this restriction. In this case, you should probably enable all the processes from a single app. 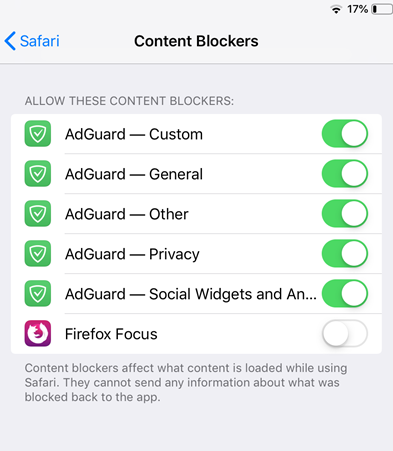 Handy hint: Ad-blockers can break websites by blocking scripts the sites need to function. Fortunately, Safari for iOS provides a fix for this. Simply long-press the page refresh button to bring up a pop-up dialogue that allows you to refresh the page without any content blockers enabled.