How does our Blocked in China Tool work?

The blocked in China tool attempts to access any URL you provide from 5 different locations across mainland China. The results will be displayed for each server location along with an average result. The testing process can take up to 30 seconds to complete, but we cache the results for future users which means the tool will become faster with time.

Why does China block websites?

The impact of rapid economic development and increased cultural engagement with the rest of the world over the last 20 or so years has had a profound impact on Chinese society.

When it comes to matters of personal liberty and political freedom, however, the ruling Communist Party (in truth an inheritance-based oligarchy) maintains tight control over the information and exposure to “foreign” ideas that Chinese citizens are permitted to access. Or at least, it would like to…

The internet, however, in a country in which the standard of living is soaring after many years of deprivation and economic stagnation, is both insanely popular, and is central to China’s continued economic development. Given that it is also global phenomena that respects no national boundaries, this clearly represents a major threat to the Party’s reactionary social agenda.

So, which websites are blocked in China?

Most notable for being blocked in China are all of Google's services, including: Gmail, Google Drive, Google Search and YouTube.

The Chinese government, for its part, was annoyed by Google’s refusal to remove videos on YouTube that showed police beating protesters during riots in Tibet.

It's not hard to imagine why the Chinese Government would want to block access to western news sites. Some notable sites which are blocked include: BBC, New York Times, Reuters and Wall Street Journal.

The citizens of China have also been denied access to many popular communication services by their Government, that are ubiquotusly enjoyed by many in the West. These include: Skype, Whatsapp, Viber and Facebook Messenger.

Other types of sites

In addition to these broad types of websites, the Chinese Government also endeavours to block access to other types as well including sites hosting pornographic material as well as VPN sites, designed to help users circumnavigate the Great Firewall of China.

How do I unblock websites in China?

If a website is blocked in China, it can often be unblocked with a Virtual Private Network (VPN). These are subscription-based services that proxy your internet connection over an encrypted connection. 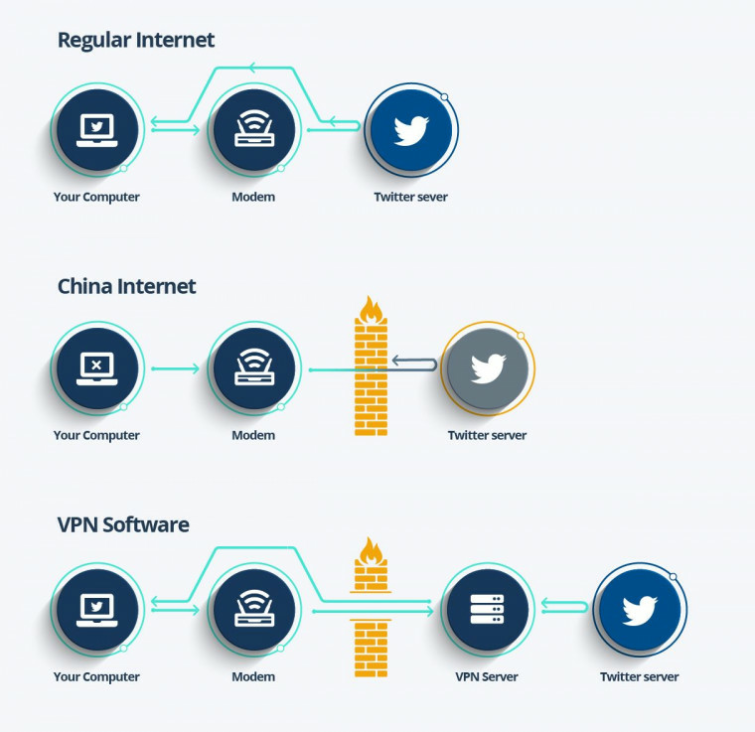 Unfortunately, the Chinese government is all too aware that people use VPNs to evade its censorship regime, so the Great Firewall of China (GFW) also blocks many VPN services. But not all...

To find out more about how VPNs help unblock websites in China, please see our VPNs in China guide.

How do I find a VPN that works in China?

It just so happens that we have a list! Please see 5 Best VPNs for China, which we regularly update with the latest information as it available. It is important to note that the VPNs on that list only work because they all use special obfuscation techniques to evade detection by the GFW.

It is therefore vital that you enable XOR encryption in your VPN app, connect to special “stealth servers,” or do whatever extra steps are required to bypass China’s VPN blocks.These special obfuscation features are discussed in detail in each of our full VPN reviews.

What is the Great Firewall of China?

The GWF uses a range of technologies to “protect” Chinese citizens from content the Party deems inappropriate or dangerous for them to see. These technologies include simple IP blocks on website addresses. DNS filtering, URL filtering, packet filtering, and more, are also used.

In addition to these, Deep Packet Inspection techniques are used to foil attempts to bypass these blocks. If you are interested in learning about the censorship methods used by the GFW, an excellent discussion on the subject is available here.

The first phase of the GFW was completed in 2006, but it has since grown in complexity and scope. It now restricts internet access into and out of mainland China to only three access points. It also employs up to fifty thousand cyber-intelligence specialists to police the data-waves.

An important aspect of the Great Firewall is that it is deployed very unevenly. A website can be blocked in one province, but be available in the next.This is why our Blocked in China Tool tests website access in five separate locations around China.