Founded back in 2010 by Carolyn and Ron Yokubaitis, Golden Frog is a US-based Internet conglomerate that has both VyprVPN and the optimized gaming network Outfox in its portfolio. VyprVPN is a no logs VPN based in Switzerland that implements strong OpenVPN encryption, a killswitch, DNS leak protection, and an obfuscation/stealth feature (called Chameleon). VyprVPN is a top-of-the-range premium VPN, that is the first to have published a full independent audit of its zero-logs service. In this VyprVPN review, we take an in-depth look at this VPNs security features, connection speed performance, as well as its ability to unblock services such as iPlayer and Netflix US.

Get the low down on VyprVPN with our handy video review. 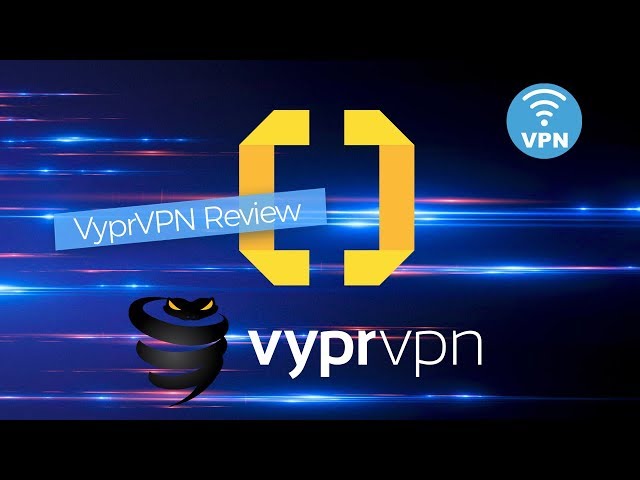 Due to the popularity of its Premium plan, VyprVPN has decided to make things simpler by discontinuing its Basic tier. The Premium package is all-inclusive, offering 5 simultaneous connections, unlimited data, VyprVPN Cloud and its proprietary Chameleon Protocol for obfuscated servers. Subscriptions can be purchased monthly, yearly or every two-years with increased savings on the longer plans. If you find yourself unhappy with the service, you can take advantage of the provider's generous 30-day money-back guarantee.

VyprVPN permits a large number of payment options. This includes most credit cards, Alipay and PayPal. Sadly, VyprVPN does not accept Bitcoin payments or any other cryptocurrencies. When purchasing a subscription with VyprVPN, users can also choose to pay with:

VyprVPN is one of the few VPN services that consistently provides access to a large number of online streaming services. This includes the ability to stream US Netflix from any country. Netflix UK can also be unblocked. Users can also watch BBC iPlayer abroad and other UK services such as Channel 4 and ITV Hub. This makes VyprVPN an ideal choice for people who want to unblock streams. This VPN will also enable you to unblock Youtube videos that are restricted within your region. Below you can find a full list of the services that it is currently successfully unblocking:

VyprVPN is a fast VPN that unblocks a lot of desirable content from around the globe. In addition, VyprVPN provides customers with a variety of useful features. Premium customers can use the proprietary obfuscation protocol Chameleon (stealth mode) to bypass ISP firewalls and conceal their VPN use. VyprVPN’s features include:

The most notable thing about VyprVPN is their ability to provide you with the ultimate package when you combine all of their exclusive features and proprietary technology. If you want more information on the security that VyprVPN’s proprietary technology can offer you, make sure you continue reading below.

Chameleon is a proprietary VPN technology created by Golden Frog's developers. It is the firm's version of VPN stealth mode/cloaking. It provides the ability to explore the internet in a “truly open and uncensored” way. Chameleon is proprietary (unlike Obfsproxy and Stunnel - more common forms of VPN cloaking). We can only presume that like those other technologies it disguises OpenVPN traffic as regular HTTPS in order to cloak VPN use. However, it is possible that it is doing more because it claims to be able to evade Deep Packet Inspection (DPI).

Chameleon lets you bypass government, corporate, and ISP firewalls that prevent you from accessing content, or which slow VPN traffic down to a snail's pace (bandwidth restrictions). Even better, you are able to do so without sacrificing your security. Chameleon is available to Premium members that use Windows, Mac, Android or a router.

VyprVPN Cloud works with DigitalOcean, VirtualBox VMS, and AWS. It permits premium subscribers to set up a server in another city/country that they can connect to and get the same IP address (static IP) each time.

Hover your mouse over the graph below to see the results for the five fastest VPNs in the world right now.

Every VPN requires testing to verify it is working efficiently. VyprVPN is no exception. In order to provide you with the most accurate information possible, we used a scientific server-based speed test methodology. Our system tests VyprVPN three times a day to give you up to date speed test results. We test its UK, US, Australia, and Hong Kong servers. Below are its download results for January and February of 2020. 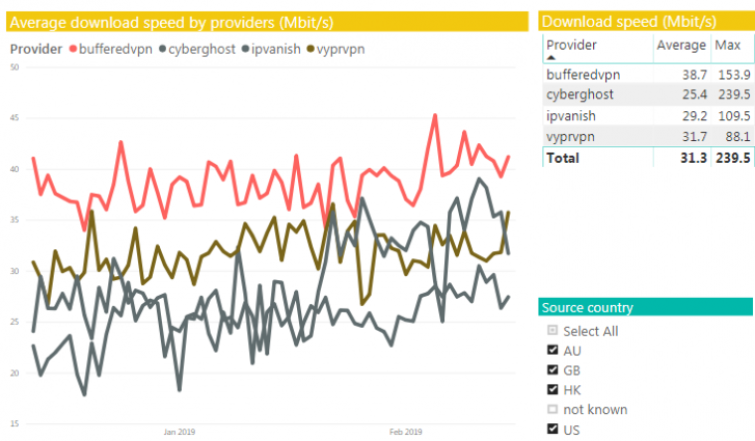 This is excellent and means that VyprVPN is perfect for doing data-intensive tasks like streaming and downloading via P2P. To test your own VyprVPN connection speeds, visit a website such as www.speedtest.net.

We recommend performing leak tests on a somewhat regular basis to stay on top of things. During our tests, we found no IPV4 leaks, IPv6 leaks, DNS leaks, or WebRTC leaks. This is fantastic news and means that the VPN is providing solid privacy.

To test your own VyprVPN for leaks, visit websites like ipleak.net, test-ipv6.com, and/or doileak.net.

VyprVPN is officially based in Switzerland, which is great for privacy. However, its parent firm Golden Frog does have offices in Austin, Texas which may raise alarm bells to the anti-NSA VPN users. On the whole, however, we consider this to be a private and secure VPN with an excellent array of privacy features. Thanks to its full third-party audit - it is the first VPN to ever completely prove the efficacy of the privacy on its servers!

VyprVPN offers several different encryption protocols that operate at various levels of speed and encryption. The current protocols offered by VyprVPN include PPTP, L2TP/IPsec, OpenVPN, and Chameleon for premium members. At ProPrivacy.com, we recommend either OpenVPN or Chameleon. VyprVPN uses the following OpenVPN encryption:

Data channel: an AES-256-CBC cipher with HMAC SHA256 hash authentication. The handshake on the data channel is TLS-ECDHE-RSA-2048.

Perfect forward secrecy is provided by a Diffie-Hellman-2048 key exchange.

This is robust encryption that will protect your digital privacy and, despite some of the comments that have appeared under this review regarding HMAC SHA1 authentication: VyprVPN only ever falls back to that less robust setting depending on the user's system. This is entirely normal. There is always fallback on cipher suites as what is actually supported depends on the user's system.

We list the max settings supported by the VPN because most modern systems can and will support the max cipher suite settings. For this reason complaints about VyprVPN using SHA1 for authentication are unfounded, because a) it doesn't (it only falls back to it in rare cases), and b) HMAC SHA1 is secure anyway.

VyprVPN recently released its new VyprVPN 3.0 client. This is the first update to its clients in quite a few years, and we are happy to report that those updates are a welcome improvement for its users. VyprVPN 3.0 is available for Windows, Mac, iOS and Android users, and it includes a more user friendly style as well as a well-rounded feature set,

In addition to the new 3.0 client, VyprVPN is  compatible with most TVs and routers. This includes Android TV, OpenELEC, Apple TV and Tomato. To find information on the setup for specific platforms, navigate to VyprVPN’s VPN Apps page.

The VyprVPN 3.0 Windows client is a fully featured VPN app that has a killswitch and automatic WiFi protection (useful if you happen to connect to an unsecured WiFi network while on the go). Speeds are excellent and this VPN will unblock a lot of content. In addition, this client suffered from no leaks whatsoever - meaning that it can be trusted in terms of privacy and security. The new 3.0 client is definitely easier to use, and it gives users added control over selcting TAP drivers and DNS settings, which might come in useful if you require customization, or are experiencing connection issues. 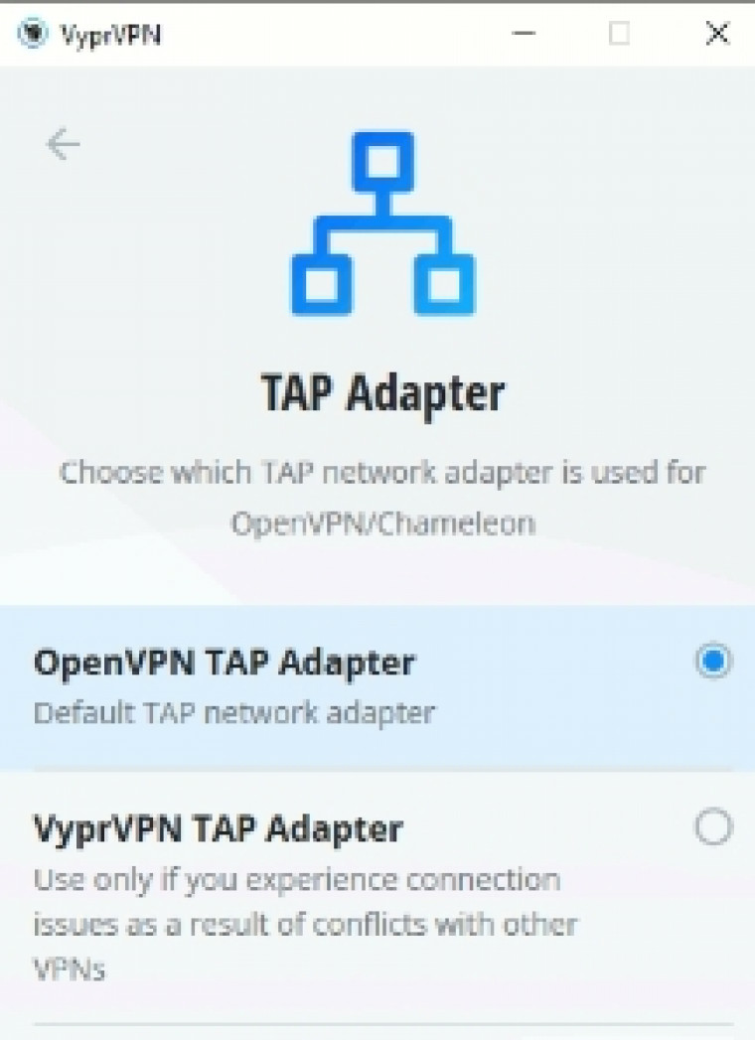 Below you can see a full list if the features available in the 3.0 version of this app:

The VyprVPN 3.0 Mac VPN OS X client is fully featured with DNS leak protection and a killswitch. We discovered no leaks whatsoever. This makes this client ideal for tasks such as downloading via P2P. The Mac client gives users a choice of L2TP/IPsec or OpenVPN (160-bit and 256-bit) encryption. Users can also connect with the stealth protocol "Chameleon" to bypass firewalls and VPN restrictions in countries like Iran and China.  Below you can se a full list of the features you get on the new 3.0 app:

If you are looking for a iOS VPN app then you will be happy to hear that VyprVPN 3.0 supports iOS as well as Android. That being said, the Android VPN app has more features than the iOS version. The iOS VyprVPN app has the following features:Public Wi-Fi Protection, Automatic Reconnect, Server Selection, Fastest Server, VyprDNS, and it uses the IKEv2 Protocol as opposed to OpenVPN.

Android users get the same features with the addition of a killswitch, Chameleon (obfuscation) feature, automatic port selection, and OpenVPN encryption

With around the clock customer service that operates 365 days of the year, and an active community in the official Golden Frog forum, VyprVPN’s overall customer support system is considered above average.

You can get in contact with VyprVPN’s customer service team by email ([email protected]), an online contact form, or by using their website’s live chat. While gathering more information on VyprVPN’s log policy, we were also able to give their customer support system a test run.

Submitting a query is easy – you enter your details and connect to a live chat representative, this feature is available 24/7. After a few seconds of waiting, we received a helpful reply to our inquiry. We were also given contact details in case further communication was necessary.

Overall, the experience was extremely helpful and user-friendly.

VyprVPN is a great choice for those that seek an easy to use VPN for daily use. With servers that spread across the globe and a user-friendly interface, VyprVPN is a great option for VPN beginners. Considering what you get in terms of privacy and security, VyprVPN can be considered excellent value for money - especially when purchased yearly or every two years. The fact that it unblocks services like Netflix US and BBC iPlayer is a testament to the reliability and performance of its service.

VyprVPN can be used for most data-intensive tasks, and because it is no logs it is ideal for Torrenting via P2P. If you’re still not convinced, you can test the VPN yourself by making use of its 30-day money back guarantee -  it is available for all of their plans. An outstanding VPN that has proven its no logs policy with a full independent audit. Outstanding!