If you enjoy using Spotify, you'll probably be annoyed to discover that the music streaming service geo-restricts some of its music so you can't listen to it outside your home country. This is because Spotify is only licensed to play certain music in specific regions.

However, with a VPN you can unblock Spotify music no matter where you are in the world. VPNs change your IP address and encrypt your connection, which tricks websites into thinking you are in a different location.

In this article, we list the best VPNs for unblocking Spotify and show you how to do it.

The best VPNs to unblock Spotify

To ensure you can unblock Spotify from anywhere in the world, we have meticulously tested and reviewed all of the VPNs on this list. They each come with the following key features:

We take a closer look at our recommended VPNs for Spotify below.

ExpressVPN is a provider from the British Virgin Islands that is known for having a large network of fast servers. With Express you get access to servers in 94 countries , which means you will easily be able to unblock Spotify no matter where you live (and in any region that you prefer).

ExpressVPN has apps for Windows, macOS, iOS, Android, and Kindle devices, and you can install ExpressVPN on Linux machines. If you access Spotify through a browser on your computer, you can install the ExpressVPN browser extension for Chrome, Firefox, and Safari. You can also install the VPN on a bunch of different routers. This gives you almost unlimited options for using a VPN to access foreign Spotify regions.

If you already have a Spotify account, ExpressVPN will allow you to access the service while you are on vacation. And ExpressVPN can also unblock Netflix US, BBC iPlayer, and tons of other content from around the globe – which makes it a superb all-rounder. Finally, we love this VPN because of its no-logs policy and strong privacy features. This ensures that when you connect to ExpressVPN; nobody will know what you are doing online. You can test it using its 30-day money-back guarantee.

NordVPN matches ExpressVPN's 30-day guarantee period. This VPN has server locations in 60 countries , many of which are covered by Spotify's service. If you find your home country on the list, then you can save a lot of money by taking out a subscription to NordVPN instead of ExpressVPN.

Another advantage that NordVPN has over ExpressVPN is that it gives you an allowance of six simultaneous connections as opposed to ExpressVPN's allowance of three. NordVPN has no problem with customers sharing accounts, so you can really bring down the cost of running this VPN service.

Surfshark is based in the British Virgin Islands, a location that is great in terms of privacy. It is a no-logs VPN service with great technical security, a bunch of useful features, and superb 24/7 support. It is also a VPN that represents incredible value for money, and the level of service you get is exceptional considering the low cost of a subscription.

With Surfshark you get superb apps for all platforms that come with advanced features like a kill-switch, DNS leak protection, and obfuscation. And it has lightning-fast connections to 100 countries to unblock Spotify, Netflix US, BBC player, or anything else you are interested in.

We love that this VPN lets subscribers install the service on an unlimited number of devices. And that it has live chat support. You can also test it yourself using its 30-day money-back guarantee. Ideal for anybody who wants to stream Spotify (or anything else) in complete privacy and without spending too much money on a VPN subscription.

Private Internet Access (PIA) is a US-based VPN provider that keeps zero logs - a claim it has proven in court. The VPN has servers in over 84 countries , provides strong OpenVPN encryption, and is one of the most popular VPN services among Reddit users. It can easily help you unblock Spotify, and it represents excellent value for money.

With that said it is worth noting that this VPN is more geared towards techy users. It is particularly good for torrenting as it has lots of advanced VPN features and provides high levels of customizability. However, it also has live chat support and access to Netflix US. So, if you don't mind learning a few things, this VPN is a versatile service that will give you a lot of versatility. You can test it risk-free, using its 30-day money-back guarantee.

CyberGhost is a great VPN service for beginners with little experience of using a VPN. The VPN is great for your privacy thanks to its no-logs policy, strong privacy features, and military-grade OpenVPN encryption. With servers in over 91 countries worldwide, you can easily access Spotify, and because this VPN is fast, you will have no problem streaming songs on Spotify - or HD video content on Netflix US.

In addition, this VPN is great for unblocking a massive cross-section of geo-restricted services. We love that CyberGhost VPN lets its users install the VPN on up to 7 devices, and that it has live chat support on its website. Overall, this is a great all-rounder that you can test yourself thanks to its 45-day money-back guarantee. Great for unblocking content and for gaining privacy both at home and on WiFi.

How to unblock Spotify from anywhere

Whether Spotify is blocked by a local network administrator (at work or in school, for example), or is unavailable because of international geo-restrictions - a VPN can easily allow you to regain access.

All of our recommended VPN providers have custom apps, which makes them extremely easy to use. As a result, you can follow the guide below to get the VPN up and running with Spotify:

Remember to connect to your VPN to stream music on Spotify.

Anybody wanting to purchase a new Spotify subscription with a VPN should be aware that they may need a valid local payment method to complete the purchase. One option is to use a virtual online card. We recommend Get US Unlocked as it's cheap and easy to use.

Another way around this is to purchase a gift card online from an online vendor selling Spotify gift cards in the country where you intend to purchase the subscription. These will arrive by email and will allow you to check out and get a Spotify subscription without having to enter a valid local card number.

How to download the Spotify app with a VPN

If you are in a country that doesn't have access to Spotify you will need to use a VPN to download the Spotify app. Below, we have explained how to do this:

How to use a VPN to download Spotify on Google Play

Using a VPN to download Spotify on Google Play may sound complicated to users who aren't totally tech-savvy, but it's actually very quick and simple. Here are the steps:

Once you have logged into the US Play Store you will be locked into it for a year. This is why it is important to make a secondary account (so that you can use your regular account in your own country as usual). This may differ depending on what device you are using it on. Check out our Android VPN and iOS VPN guides for more information about using a VPN on your mobile.

How Do I Install a VPN on an iPhone? - iPhone VPN settings configuration

How to set up a VPN on Linux - A guide to installing a VPN on Ubuntu, Kali, and Mint

Can I use a free VPN to unblock Spotify?

Although there are some free VPN services available on the market, the unfortunate reality is that they are not suitable for streaming vast amounts of music content on Spotify. Free VPN services that aren't shady (most are because they harvest your data and sell it) only offer their service as a loss leader. The idea is to let people try the service so that they will eventually pay for a premium subscription.

As a result, reliable free services have bandwidth restrictions, usage limits, and limited server locations. This will make streaming music problematic, because you will suffer from buffering issues due to slow speeds, and will run out of data early on each month and not be able to listen to anymore Spotify.

For this reason, if you are short on cash, we recommend sticking to a cheap VPN service that gives you unlimited data and unthrottled speeds.

Where is Spotify available?

Spotify is available in most of Europe, the Americas, Australia, New Zealand, and parts of Africa and Asia. 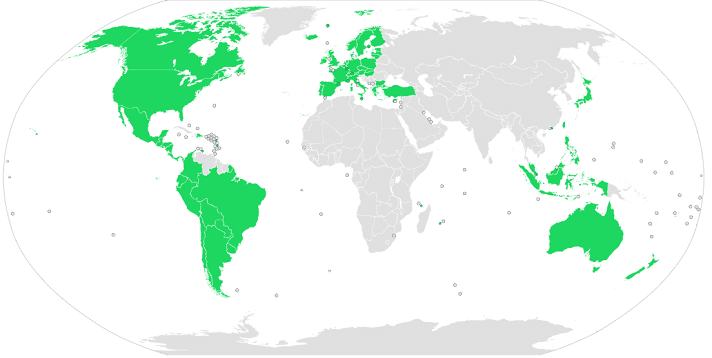 Below we have included a full list of locations where Spotify is available:

When you use Spotify (be it on your PC or mobile device), it uses your IP address to determine your geolocation. In doing so, Spotify may decide to either completely block access, or restrict the availability of songs and artists due to licensing restrictions.

By connecting your VPN to a server in a different country, Spotify will detect the IP of the server and your real IP address will be hidden. Spotify will now offer you all the music available in that region, rather than your current one.

You can use this workaround to get the most out of Spotify's service and unblock its full musical archives.

Below we have answered some of the most commonly asked questions about using a VPN with Spotify.

Yes. Spotify prices vary around the world due to the economic status and spending power of those countries. This means that you can connect to a VPN server in Turkey or South America to unlock a cheaper subscription price.

No. Spotify attempts to keep copyright holders happy by blocking the IP addresses that are known to belong to VPNs. This is why you must pick a VPN provider that is known to consistently work with Spotify.

As a paying customer, Spotify has no interest in actually banning you from its service, and for this reason, it does not attempt to ban or block people who use a VPN.

No. A VPN can allow you to pretend to be in a different country, which can reduce the price of a premium Spotify subscription. However, there is no place where Spotify premium is free, so you will need to purchase a subscription at a reduced rate.

Yes. The basic Spotify plan is free and as soon as you connect to a server in a country where Spotify isn't restricted you will be able to enjoy Spotify free.

The best Spotify VPN. It's lightning-fast, offers apps for all platforms, a worldwide server network, and a 30-day money-back guarantee.

The most popular Spotify VPN. Unblocks Spotify from anywhere, with great network of fast servers, and a 30-day money-back guarantee.

The best value-for-money Spotify VPN. It's packed with features, and works on unlimited devices, with a 30-day money-back guarantee.

The cheapest VPN for Spotify. Offers great apps for all major platforms – ideal for newbies, and a 45-day money-back guarantee.