Want to set up your VPN with Ubuntu, Kali, or Mint? Then you're in the right place! In this guide, we'll walk you through the straightforward process of installing a VPN using its Linux GUI, NetworkManager, and other methods.

We'll focus on installing a VPN on Ubuntu in this guide, seeing as it's enduringly popular, but all of our instructions can be applied to Linux Mint, Debian, and Kali (which is based on Debian), and should also provide useful guidelines for folks running different distros.

If you want to know more about how you can secure your data, check out the guides below:

For most operating systems, the easiest way to set up a VPN client is by using the provider's custom software – and the same is true for Linux! However, very few VPN providers actually offer a custom Linux GUI client, and instead prefer to develop apps for more popular platforms.

The good news is that we've rounded up and reviewed those services that do include a custom Linux client. You can check them out in the table below or visit our Linux VPN guide for a more in-depth look at each provider.

Custom Linux GUI clients are typically far easier to set up than their manual counterparts, seeing as there's less configuration required (and handy guides are always available), and are stuffed with more features, too. Our top Linux VPN picks come with benefits like a kill-switch, ad blocking functionality, WebRTC mitigation, and DNS leak protection. Essentially, you'll be getting a fully-featured VPN experience – just like Windows and Mac users!

The best Linux VPN. With dedicated clients for a variety of distros and a full custom client, as well as a kill-switch and ad-blocker. Also offers a 30-day money-back guarantee.

The best secure Linux VPN. Offers a sleek custom GUI client and comprehensive protection from leaks and third party snooping, as well as access to geo-blocked content. With a 30-day money-back guarantee.

The best privacy-oriented Linux VPN. An open-source and zero-logs provider that offers Linux users a full GUI client and all the same features available to other platforms, and a 30-day money-back guarantee.

The best advanced Linux VPN. Its Eddie client is fully-featured with a kill-switch and leak protection, and torrenting is permitted across its entire server network. Also includes a 30-day money-back guarantee.

OpenVPN For Linux via NetworkManager

Outside of dedicated clients, probably the easiest way to install and use OpenVPN on most Linux systems is via the NetworkManager daemon.

It is worth noting that AirVPN recommends against using NetworkManager "due to multiple, critical problems". I have not, however, been able to establish any more details regarding this, and most VPNs seem happy to use it.

The VPN is now set up. To start it, go to NetworkManager -> VPN off -> and select the server you wish to connect to. 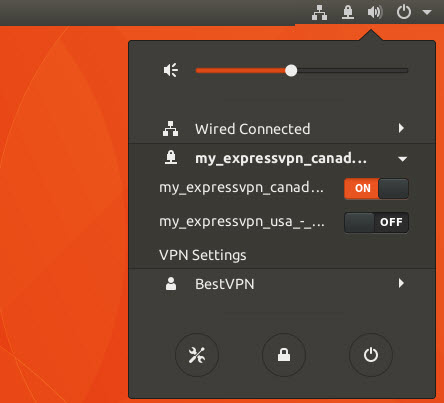 According to AirVPN, using OpenVPN via Linux Terminal is also more secure than using NetworkManager, although I have not been able to confirm this independently or uncover the details.

The OpenVPN package is available in the Debian and many other repositories, but CentOS and RHEL users (for example) will first have to install the EPEL repository into your system.

Note that if using OpenVPN directly, DNS requests will not be pushed to the VPN provider's DNS servers. IP leaks can be resolved by modifying resolvconf to push DNS to your VPN's DNS servers.

Alternatively, you can manually configure the iptables firewall to ensure all traffic (including DNS requests) must go via the VPN server. This will, at least, ensure all DNS requests are proxied by your VPN. It will also act as a kill switch.

PPTP is not a secure VPN protocol, so we generally recommend that you avoid it. NetworkManager comes with PPTP support "out of the box," however, which can make PPTP a useful "quick and dirty" solution when security is not a high priority. 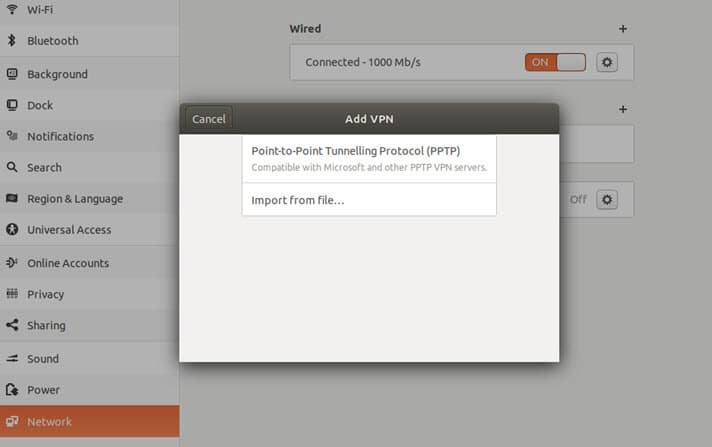 Fill in the PPTP setting given to you by your VPN. Note that these settings are not specific to Linux, so you can use generic settings or settings given for another platform. 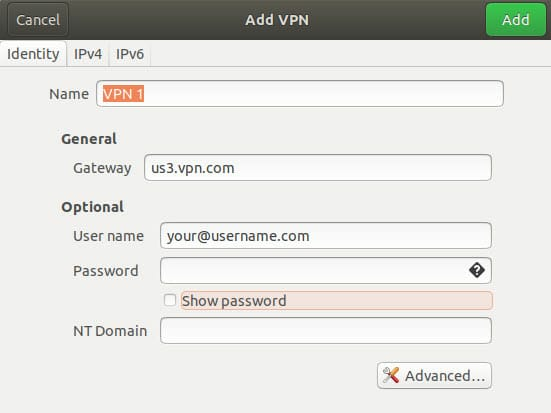 As disused in our Complete VPN Encryption Guide, L2TP is a tunneling protocol that does not provide any encryption or confidentiality to traffic that passes through it, so it is usually implemented with the IPsec authentication suite (L2TP/IPsec).

How to install L2TP/IPsec for NetworkManager

To install, fire up Terminal and enter the following commands:

You may be prompted to install additional binaries (e.g. for GNOME), in which case go ahead. Restart your PC and L2TP should now be enabled in NetworkManager. 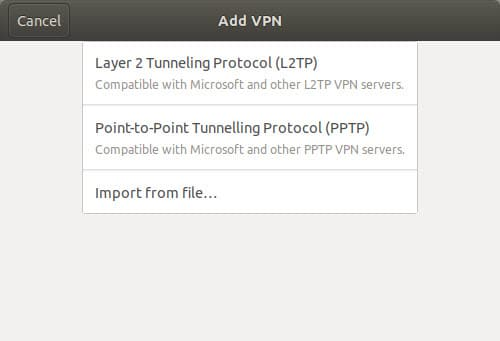 Setup is very similar to using PPTP (see above), except that you will need to enter some additional IPSec authentication details. Again, your VPN should be able to provide these, and generic settings are fine. 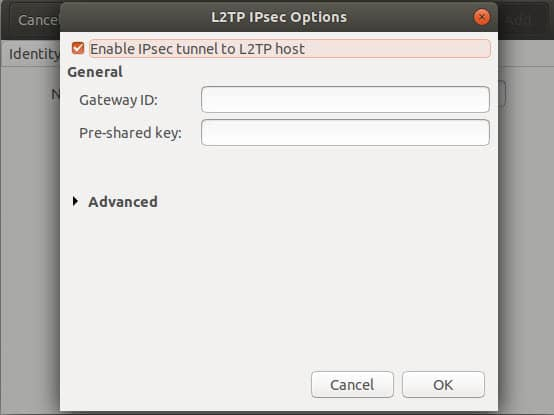 Update May 2018: There is currently a bug in xl2tpd which may compromise its use with the IPSec protocol. The issue has already been fixed in Fedora, so I would expect it to be patched in Ubuntu and Debian soon. Please see here for the details and latest updates.

IKEv2 is a secure and fast VPN protocol that is rapidly gaining popularity with VPN services. It is supported in Linux via strongSwan. strongSwan packages are available for most versions of Linux, or you can compile it yourself.

How to install IKEv2 for NetworkManager. You can build this from the source, or Debian/Ubuntu users can open Terminal and enter:

In use, the plugin works just like the L2PT NetworkManager plugin described above.

Simply enter the IKEv2 settings provided by your VPN (if it supports IKEv2). 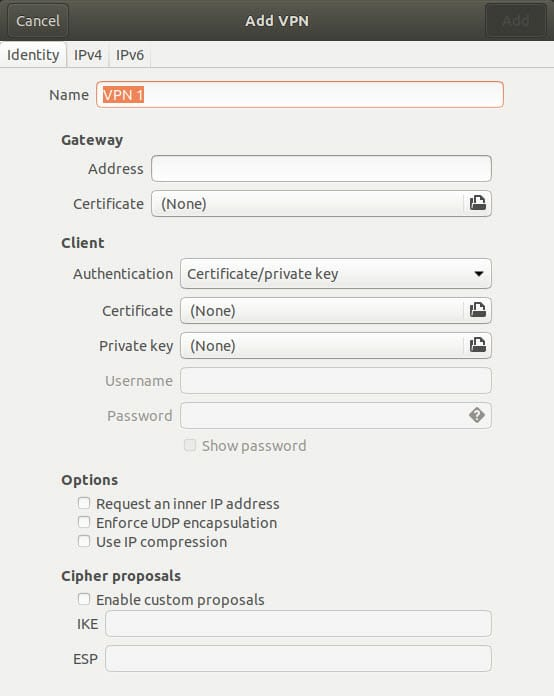 How to Test a VPN for Linux

If using NetworkManager, a small network lock icon in the notification bar lets you know at-a-glance that you are connected.

For further confirmation the VPN is connected and working correctly, you can run an IP leak test…

Check your VPN for IP leaks

Once connected to the VPN (using whatever method), it is a good idea to check for IP leaks. 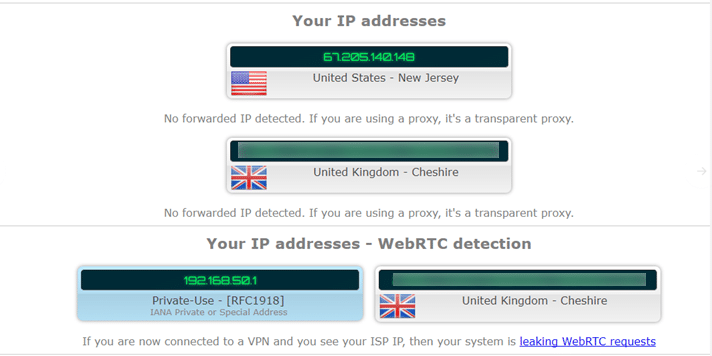 The example above shows a bad case of IPv6 leaks. The IPv4 DNS result correctly shows that I am connected to a VPN server in the US, but the website can see my real UK IPv6 address via both a regular DNS leak and WebRTC. Fail!

For more information about staying secure with a VPN in the UK or US check out the guides below:

Note that Private-Use – [RFCxxxx] IPs are local IPs only. They cannot be used to identify an individual or device, and so do not constitute an IP leak.

Things are never quite as easy with Linux as they are with more mainstream platforms – a fact that longtime users will be well aware of. That said, even inexperienced Debian and Ubuntu users should have no problem setting up a VPN using a plug-and-play custom client or NetworkManager