Deezer is a hugely popular music streaming platform that contains more than 50 million tracks. Unfortunately, Deezer is blocked by some local network admins, and licensing restrictions mean that certain songs are unavailable in particular regions. But, with a VPN for Deezer, you can unblock more music – and even get a Deezer subscription for a lower price.

A Deezer VPN will allow you to bypass network restrictions to stream music at work. Plus, with a VPN for Deezer, you unblock Netflix US and huge amounts of international content while gaining digital privacy online.

The best VPNs for Deezer at a glance

Here, you can take a quick look at the best VPNs for Deezer. These services are super-speedy and reliable, so you'll be able to access Deezer without any buffering issues or privacy hiccups.

The best VPNs for Deezer – in more detail

Our experts have searched far and wide for VPNs that work with Deezer. Below, we have listed several VPNs that will give you access to more music and enable you to subscribe to Deezer cheaper. For more information about each service, click through to our VPN reviews.

ExpressVPN is a provider based in the British Virgin Islands that has been around for many years. The service is trusted and reliable, and can offer both watertight privacy and fantastic unblocking capabilities.

With ExpressVPN you can access geo-restricted Deezer content, YouTube, Netflix US, Hulu, BBC iPlayer, and much, much more. The apps are available for all platforms and they have advanced VPN features such as OpenVPN encryption, a kill-switch, obfuscation, port forwarding, and split tunneling. The VPN also throws in a Smart DNS service, at no extra cost.

We love that this VPN stores zero logs, which means it will never have any records of what you do online. Plus, it can protect your privacy and give you added freedom both at home and on mobile devices because it permits up to 5 simultaneous connections. And with ExpressVPN you get 24/7 live chat support.

It's an exceptional VPN that is worth every cent. You can compare it to our other Deezer recommendations thanks to its 30-day money-back guarantee.

NordVPN is a world-famous VPN which is widely used for Deezer and other streaming services – thanks to its expansive server network, amazing speeds, and affordable subscription plans. This VPN provider is based in Panama, too, which is a country known for respecting online privacy. NordVPN uses robust encryption with great VPN protocols – so your sensitive information is safe with this service.

NordVPN provides all of the important standard security features you'd expect from a big name provider. These include a kill-switch, which protects you from data leakages even in case your VPN connection drops, DNS leak protection, and obfuscated (stealth) servers. However, it also offers some exclusive tools, such as ad and malware Blocker, and Tor over VPN, for an even more secure online experience. Best of all, it’s all a part of NordVPN’s great value-for-money subscription plan, so none of it comes at an extra cost!

Finally, with its vast network of servers in 60 countries worldwide, you’ll get  unrestricted safe access to Dezer, but also to innumerous movies and TV shows on popular international streaming services – like Disney+, HBO Max, and BBC iPlayer. And, if you can’t make up your mind just yet, make sure you compare it head to head with ExpressVPN, and other stellar VPN options from this list, using its 30-day money-back guarantee.

Private Internet Access (PIA) is a VPN based in the USA that is highly praised by Reddit users. The VPN has highly customizable apps for all platforms, which come with a wide range of advanced VPN features; OpenVPN encryption, a kill-switch, DNS leak protection, obfuscation, port forwarding, and split tunneling. This makes the VPN perfect for accessing Deezer or Netflix US, and for sensitive tasks such as torrenting.

PIA is suited to people who want more granular control over their VPN. Admittedly, this isn't necessary for Deezer, and you may not need to use some of those features. However, for people who want to torrent this will come in handy.

Overall, it's a great VPN that won't disappoint. However, it isn't quite as fast as some of the other options in this list. Test it yourself to see how it fares using its 30-day money-back guarantee.

Surfshark VPN is a relative newcomer to the VPN industry. However, the service has been developed with all the most desirable features in mind, which makes Surfshark an instant hit with subscribers. Surfshark has a superb reputation for being able to unblock content. It will allow you to get a cheaper Deezer subscription, or to unblock a massive choice of international Netflix catalogs (including the US and Canada, which are the biggest).

With Surfshark you get fully-featured apps for all platforms, and this VPN allows you to install and use the VPN on an unlimited number of devices. This makes the VPN perfect for larger families or for people with many devices. Surfshark provides a watertight zero-logs policy. And it is suitable for torrenting and other data-intensive tasks thanks to its kill-switch and obfuscation features.

There really is nothing that this VPN can't do, and it is suitable for data-intensive tasks thanks to its lightning-fast server network in over 100 countries worldwide. It's no wonder that consumers love this VPN. Test it for yourself using its 30-day money-back guarantee.

CyberGhost is a VPN from Romania that has apps for all platforms. The provider keeps no logs, which means you can trust it to always give you digital privacy – both at home and while on public Wi-Fi. The VPN can be installed on up to 7 devices simultaneously, which makes it great for families or people who own many devices. And it has servers in over 91 countries worldwide – to let you unblock Deezer from anywhere in the world.

CyberGhost VPN implements strong OpenVPN encryption, which means it is secure. And it has vital features such as a kill-switch and DNS leak protection. Plus, it provides super-fast connection speeds to let you stream music on Deezer without buffering issues.

We think this VPN is an excellent all-rounder that is ideal for beginners who just want to click connect and start enjoying Deezer right away. And it will also work to unblock SoundCloud, Spotify, Apple Music, Netflix US, BBC iPlayer, Dailymotion, and anything else you can think of! An incredible all-rounder that represents unbeatable value-for-money. Well worth trying yourself using its generous 45-day money-back guarantee.

VyprVPN is a provider based in Switzerland, a location that is generally considered the best place in the EU for a privacy service to be based. The VPN service runs on a large network that belongs to the VPN’s parent company, Golden Frog. This allows it to provide good speeds, and means that it can be trusted to provide excellent privacy levels. Plus, the VPN has had a full third-party audit of its apps and infrastructure to prove that the entire service works as advertised.

With VyprVPN you get strong apps for all platforms that are fully featured with a kill-switch, OpenVPN, and obfuscation. This VPN can help you get Deezer cheaper, and it will unblock sought-after services like Netflix US and BBC iPlayer. At the end of the day, there is nothing that this VPN can’t help you do online. However, it is not as fast as the VPNs mentioned above. Despite this, it is worth noting that this is still far better than the vast majority of VPNs on the market in 2023.

We advise you to take it for a test run to compare it against our other recommendations for yourself. You can do so easily, because it has both a free trial and a 30-day money-back guarantee!

Advantages of using a VPN for Deezer?

A VPN will enable you to gain digital privacy and internet freedom. VPNs change your IP address so you appear in a different country and VPN encryption ensures all the data going to and from your computer or smartphone is secure. This allows you to bypass any locally implemented restrictions to access website content when it has been blocked by the local network administrator. If Deezer, SoundCloud, or YouTube have been blocked by your employer or school, a VPN can easily help.

Furthermore, for economic reasons, music publishers sometimes charge different prices for songs in different regions. That means you can lower the cost of song downloads on Deezer by using a VPN to spoof your location to a country where music prices are lower.

Why these Deezer VPNs?

There are hundreds of consumer-facing VPNs on the market, which can make choosing a service confusing. Many VPNs are slow or have frustrating and unreliable software. To help you find Deezer VPNs that are perfect for the job, our experts have tested a wide cross section of the world's most renowned VPNs. We used the following criteria to single out the best VPNs for Deezer:

Unblock Deezer in your country with a VPN

Although Deezer is considered an international service, it is currently unavailable in 25 countries around the world. If you are living in one of the countries where Deezer happens to be blocked, you can easily use a VPN to pretend to be in a country where it is available.

Get Deezer cheaper with the right VPN?

Deezer charges a monthly subscription and due to spending power and exchange rates, those costs differ around the world. Below we have included the cost of a Premium Deezer subscription in various countries around the world (in US dollars) – so you can compare different prices across various regions.

As you can see, streaming music on Deezer costs vastly different amounts depending on where you buy a subscription. However, once you have paid for a subscription (even a cheaper one) you can easily use a VPN to unblock songs and artists from around the world. Thus, the cheaper cost of your subscription will not limit the songs available to you!

To make use of these cheaper subscription costs, simply connect to a VPN server in Chile or Turkey and then head over to the Deezer website, where you will be greeted with the different pricing: 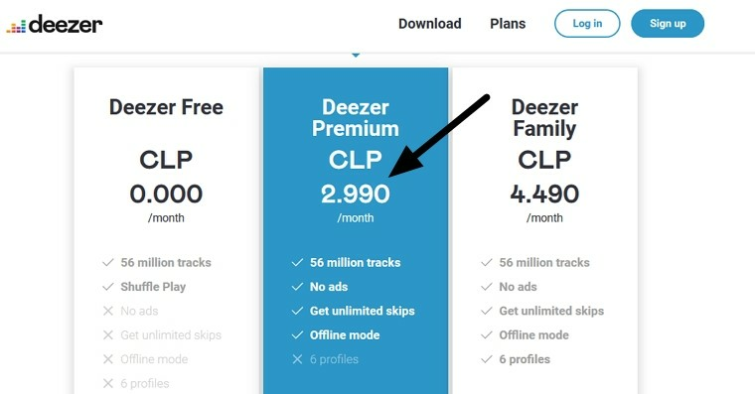 Deezer is originally a French music streaming website. For this reason, connecting to a server in France is a good way to ensure you access all the music available on the platform.

With that said, we also recommend connecting to servers in the USA and Canada – because those are locations that tend to license more content. At the end of the day, you can try using Deezer while connected to various different locations because your VPN will provide servers right across the globe.

Is unblocking Deezer in school or at work illegal?

No. The VPNs we have recommended in this guide all provide robust encryption for your data. As a result, it is impossible for any local network administrator to track the websites you visit. As soon as you connect to a VPN server, the local restrictions imposed by your school or employer melt away, and you can go ahead and access anything in secrecy. Of course, if you are using Deezer on a school computer and your teacher walks up behind you, then you could still get found out.