VPNs can either be installed directly onto your Chromebook or you can use a VPN extension.

Chrome OS has changed a lot over the last five years, or so. It has gained in power and usefulness to the point that it can now be seriously considered as a viable alternative to Windows.

The best VPNs for Chromebooks:

It should go without saying that you need (and want) a Virtual Private Network (VPN) on your Chromebook as much as you would on any other platform. But, should you use a VPN extension or are you better off installing a VPN directly onto your Chromebook? We cover all of this and more below.

How to Install a VPN on Chromebook - Setup and Configuration Guide

What is a VPN and how does it work? A Non-Technical Beginner's Guide to Virtual Private Networks

How to Torrent with a VPN on Chromebook & Chrome OS

The best VPNs for Chromebook?

We have listed our top VPN picks for Chromebook VPN. each backed by a money-back guarantee should you have any issues or change your mind. They all also offer browser extensions and provide Android apps, making it incredibly easy for you to get started.

If you need more information about any of the services we have listed below, check out our VPN reviews. 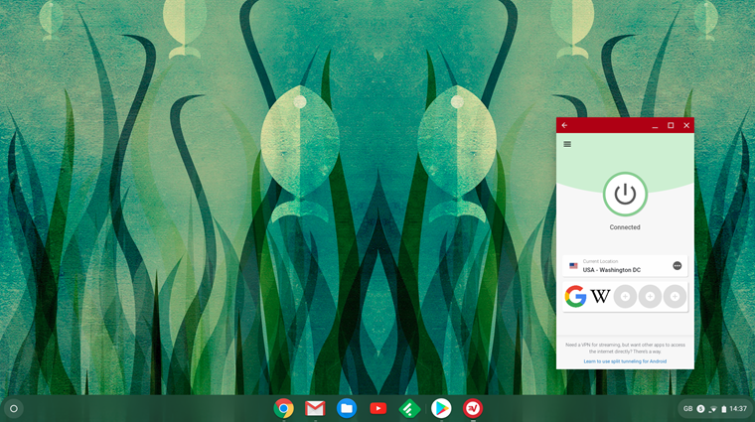 A hugely respected name in the VPN industry, this no-logs service runs entirely on non-writable media to ensure no logs can persist on its servers after a reboot.

It offers an OpenVPN Android app with full Chromebook setup instructions. This features a kill switch (“network protection”) and split-tunneling, so you can decide which Android apps running on your Chromebook are routed through the VPN interface (Chrome OS itself connections will always be routed through the VPN interface when the app is running).

Although ExpressVPN does offer a Chrome extension, this is not a stand-alone app and requires the Windows or macOS desktop client to work. It is therefore not suitable for Chromebook users. ExpressVPN supplies L2TP/IPsec setup instructions, however, for owners of Chromebooks which do not support Android.

Like NordVPN, ExpressVPN provides a custom CLI Linux script for easy OpenVPN setup in Linux, and which works flawlessly on a Linux-enabled Chromebook. 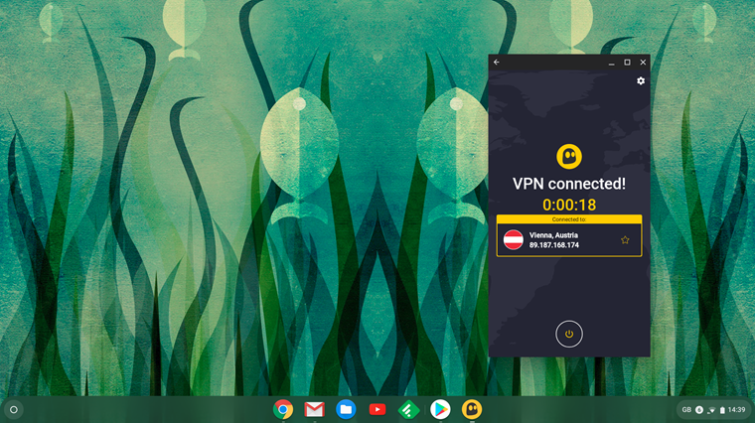 This no-logs Romanian service is noted for offering a wealth of useful VPN features at a very pocket-friendly price point.

Its Android app uses OpenVPN, has a built-in kill switch, and supports split-tunneling for rooting selected Android apps outside the VPN. The App Protection feature will auto-launch the VPN and connect to a chosen server when using selected apps. Ideal for your BitTorrent and Netflix apps!

It also features WiFi protection, which automatically enables the VPN when you connect your Chromebook to an unknown network.

Chrome OS specific L2TP/IPsec support appears to have been removed from CyberGhost’s help pages, but users of older Chromebooks can configure the native VPN client using the L2TP/IPsec settings described for other platforms.

CyberGhost offers a CLI Linux app for easy OpenVPN configuration in Linux, and also a Chrome browser extension. This HTTPS proxy extension is free to everybody, but is limited to four servers in Germany, Netherlands, Romania, and the United States. 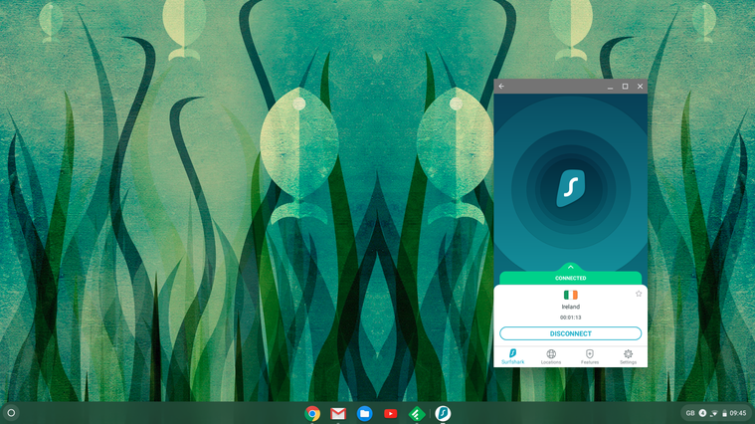 Surfshark is a no-logs VPN provider that always impresses us with the value it offers for its low price tag. This is no different when it comes to support for Chromebook users. There is an official guide to setting up the Surfshark Android app in Chrome OS, plus a CLI Linux app, and stand-alone Chrome extension.

The Android app features a DNS ad and malware blocker, a kill switch, and split tunneling. The Linux app is basically just a simple setup script for OpenVPN, but it does make life easier by preloading Surfshark’s server list. It works just fine in Chrome OS if you install from the command line (sudo apt-get install surfshark-vpn).

The Chrome browser extension has been audited for security issues by Cure53 and includes WebRTC leak protection and DNS ad-blocking. 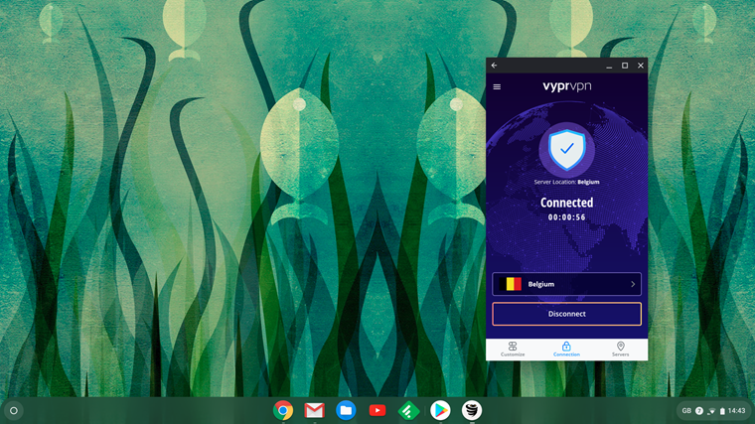 Now based entirely in Switzerland, this fully audited no-logs VPN service is notable for owning and self-operating its entire server network, thus removing the need to rely on potentially untrustworthy third-party server centers.

The VyprVPN Android app features a kill switch, DNS ad and malware blocking, and public WiFi protection for your Chromebook.

It uses the OpenVPN protocol along with VyprVPN’s patent Chameleon encryption technology which is reported to be very effective at defeating VPN blocks in places such as China.

VyprVPN provides an L2TP/IPsec setup guide for non-Android Chromebooks. It has a CLI Linux app for Ubuntu and Mint (OpenVPN, PPTP, and Chameleon), but we couldn't get this to connect to a server from inside Chrome OS’ Debian container. 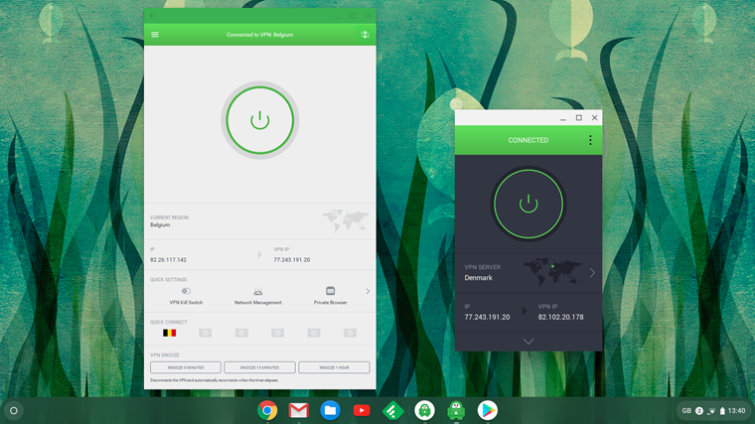 Private Internet Access, otherwise known as PIA, is a US-based company that has the rare boast of having its no-logs claims tested in court.

It's OpenVPN Android app (pictured to the left in the screenshot above) features a kill switch, split tunneling, WiFi protection, and port forwarding.

Private Internet Access’ Chrome browser extension is also more fully featured than most such VPN extensions are. It allows you to bypass specified domains, blocks WebRTC to prevent leaks, and has a bunch of other privacy-enhancing and anti-tracking features built-in.

Using VPNs on a Chromebook

A VPN usually routes all internet connections from a device through the VPN interface to your chosen VPN server. In Chrome OS, though, this situation is much more complicated, as you may be running apps from three different platforms side-by-side.

If that sounds confusing, don't worry. We will explain the four ways to run a VPN in Chrome OS:

If your system supports Android, then you can use an Android VPN app to protect all Chrome OS and all Android connections, but not Linux ones. Using an Android VPN app is the recommended route for most Chromebook users because of its simplicity and features. 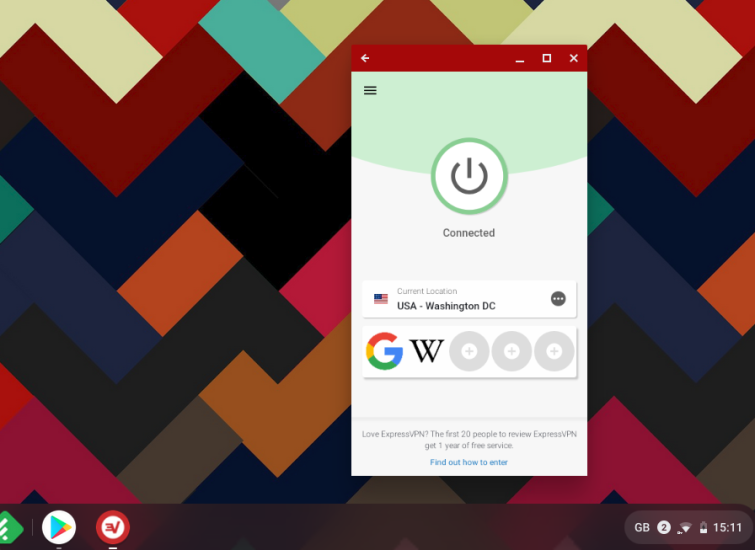 This supports the L2TP/IPsec VPN protocol and routes all Chrome OS and all Android connections through the VPN interface (just like using an Android app does). Linux connections are not routed in this way and thus do not benefit from the VPN. 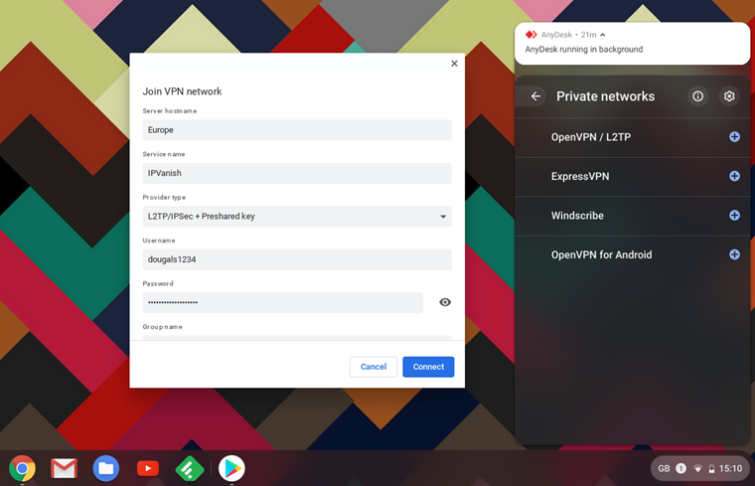 L2TP/IPsec is generally regarded as being secure when properly implemented, but has almost certainly been cracked by the NSA. This situation is not helped by the fact that every VPN service we know that offers this VPN protocol uses insecure pre-shared keys.

Given that Android apps that use OpenVPN or IKEv2 are more secure, and manually configuring the Chrome OS L2TP/IPsec client is a bit fiddly anyway, we strongly recommend using an Android VPN app over this method if your Chromebook supports Android.

It's worth noting that the native VPN client also has basic OpenVPN support, but it cannot import the standard .ovpn configuration files used by almost all commercial VPN services.

Google itself recommends using an Android app for this, which makes Chrome OS’ native OpenVPN support all but useless for most VPN users. 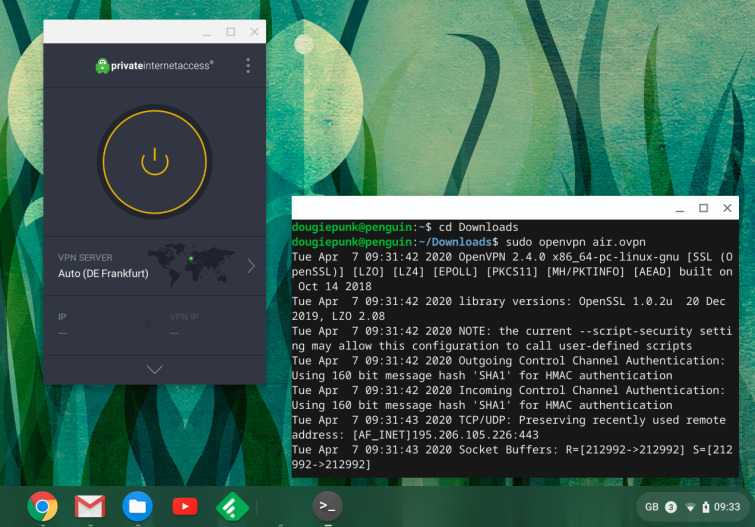 A Linux VPN app will protect Linux connections, but will not route Chrome OS or Android connections through the VPN interface.

There are only two full GUI Linux VPN apps that work on a Chromebook at the time of writing (Private Internet Access and Mullvad), but using OpenVPN in Terminal works for any VPN service that supports manual OpenVPN setup (which is most of them).

If you want to route both Chrome OS/Android and Linux connections through a VPN, then you will need to run either the Chrome OS client or an Android VPN app and run a Linux VPN app. 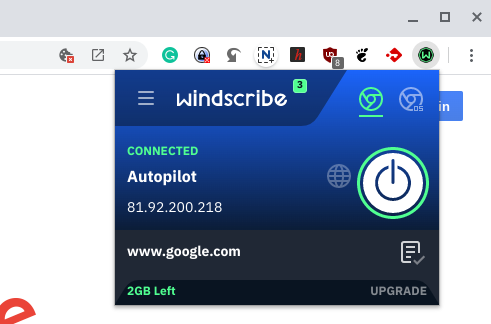 So for those who prefer to keep their Chrome OS experience pure and simple, a Chrome Browser extension can provide a quick and lightweight way to gain most of the benefits of using a true VPN.

Why do I need a VPN for my Chromebook?

Still undecided if you need a VPN service for your Chromebook?

When you use a VPN service, everything you do on your computer is encrypted. This improves you online privacy and overall security of your Chromebook. A VPN will give you the following advantages:

If you are new to VPNs find out more about all the cool things a VPN can do for you and their limitations, please check out our Beginner's Guide to VPNs.