There are several ways to set up a VPN service on a Chromebook. We show you four ways to do it in this easy to follow guide.

As Chromebooks continue to become more versatile with Android and Linux support, it can be confusing to know where to begin when it comes to installing a virtual private network on Chromebook. You are already half-way there if you've already chosen one of the best VPNs for Chromebook, and for yourself, but if not, there are four different ways you can use a VPN on your system.

What is a VPN and why use one? A non-technical beginner's guide to Virtual Private Networks

How to Torrent with a VPN on Chromebook & Chrome OS

There are several ways to install a VPN on Chromebook. Click the links below to jump to the sections you want to learn more about:

Using an Android App With Chromebook

An Android VPN app will route all Chrome OS and all Android traffic through the VPN interface (unless your app features split-tunnelling and you opt to exclude some Android apps from the VPN). This is the easiest way to set up a VPN service on your Chromebook.

It is important to note, however, that Linux connections are not routed through the VPN interface. We explain how to cover these connections below.

Android apps are easier to install and often offer advanced features such as kill switch, split-tunnelling, leak protection, and more. But if your Chromebook doesn't support Android apps, then Chrome OS has your VPN needs covered.

This method uses L2TP/IPsec, so you need to pick a provider that supports this VPN protocol. Most do, but not all - so please check before handing over your money.

A Linux VPN app will route Linux connections through the VPN interface, but not Chrome OS or Android connections.

You can run a Linux VPN app alongside an Android VPN app or the Chrome OS L2TP client if you want to route all your connections through a VPN interface. Note that doing this counts as using two devices at once as far as your VPN service is concerned.

If you have an older machine, or just enjoy the stripped down elegance of working on “pure” Chrome OS, then a VPN browser extension for Chrome is easier to set up than an L2TP connection.

Technically, these are proxy connections (usually, but not always, secured using HTTPS) that only protect your Chrome browser connections. But as the browser is basically your entire OS, this is just splitting hairs.

Once you have installed a VPN on your Chromebook, it's important that you make sure that it is working correctly. You don’t need to do it all the time, but when you first start using a new VPN service, it's always a good idea to check that it's working correctly and that you are not suffering any IP leaks. 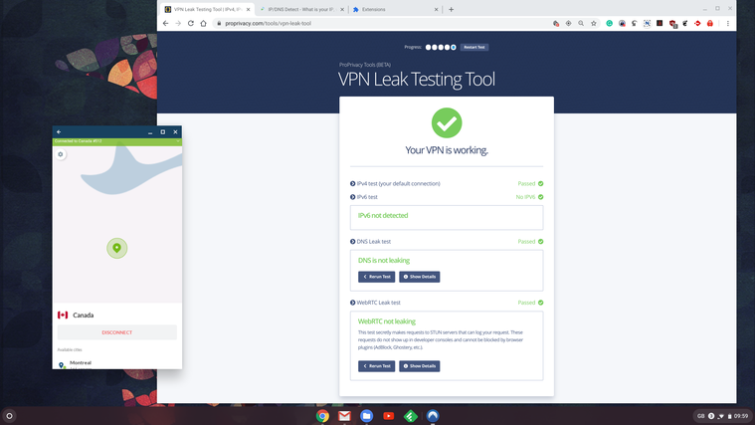 This can be easily done using our handy new IP leak testing tool. Just remember that if you are testing a Linux VPN connection, then you will need to do it using a Linux browser.