In a hurry? Check out which VPN providers our experts put in their top 5 for Facebook in the table below. Want more information? Keep scrolling for in-depth analysis.

A VPN is an online service that permits subscribers to do two things. Firstly, a VPN service permits anybody to pretend to be in a different country. Doing this allows VPN subscribers to access Facebook (and Facebook messenger) even when it is blocked by the government.

Secondly, a VPN provides military-grade encryption. This stops Internet Service Providers - and local network administrators - from being able to tell what a VPN user is doing online. This watertight digital privacy lets anybody, anywhere, use Facebook without having to be paranoid about being found out.

Another reason that people might desire a Facebook VPN, is because they are about to go traveling. People who are traveling to countries like Turkey, Russia, China, UAE, Saudi Arabia, Iran - and many others - will not be able to access their Facebook account while they are away. A VPN lets you unblock Facebook no matter where you are. For more information about using VPNs when travelling see our 5 best VPNs for Travel page. It is important to note that you must be careful when using a VPN for UAE  or a VPN in China as well as the other countries above.

If Facebook is banned in your country you may be afraid to use Facebook at home, especially if you are in shared accommodation or are renting a property from a nosy landlord. The good news is that the encryption that a VPN provides stops anybody from knowing that you used Facebook at home. A VPN also stops your home IP address from being flagged up for Facebook use.

Remember, when you use Facebook it will still know who you are because you are logging into the service with your real name. However, the VPN will fool Facebook into thinking you are in a different location. If you require a Facebook account to also be anonymous, you will need to use a VPN for privacy and sign up under a fake name. This is going to be very hard to achieve. However, in theory, if you never give Facebook any real information about yourself or give it any real photos - by using a VPN it shouldn't know where or who you actually are.

Facebook can be a plague on productivity. Employees and students are well known to have a social media addiction that can stop them from doing work. Most employers and learning institutions - including schools, colleges, and universities - ask the local network administrator to block access to Facebook. The good news is that with a VPN for Facebook, it is possible to access Facebook even when it is blocked. Simply connect to a VPN server and you appear not to be in school anymore; the same goes for work.

Also awesome: VPN encryption makes it impossible for your employer or the school network administrator to tell what you are doing online. VPN encryption means the only way you can get in trouble for using Facebook at school, or at work, is if somebody walks up behind you and catches you using the service.

It is worth noting that more and more institutions are wising up to VPNs, and it is increasingly common to find VPNs blocked. Please check out our How to Bypass VPN Blocks guide for information on getting around VPN blocks.

Unblocking Facebook from a place where it is blocked (school, workplace, or country) is extremely easy. To do so follow these simple steps:

There are well over 850 VPNs on the market and the vast majority of them are not reliable. When using Facebook in a country where it is blocked by the government, reliability is extremely important. That is why it is vital not to go for an insecure service.

Some VPNs, like our cheapest VPN (PureVPN) are great for unblocking streaming content online. However, PureVPN is not considered secure enough to protect you in a country where Facebook is blocked. That is why it is vitally important to select a VPN that is recommended for Facebook - and not just any old VPN service!

Normally, when you connect to the internet, you first connect to your internet service provider (ISP), which then connects you to Facebook (for example). All your internet traffic passes through your ISP’s servers, and can be viewed by your ISP.

When using a VPN, however, you connect to a server run by your VPN provider (a “VPN server”) via an encrypted connection (sometimes referred to as a “VPN tunnel”). This means that all data traveling between your computer and the VPN server is encrypted so that only you and the VPN server can “see” it.

Thus neither your ISP nor any anyone else who monitors the traffic between your computer (or tablet or smartphone) and the internet can see what you get up to online. This includes visiting Facebook.

Facebook is completely blocked in mainland China. Or at least that is the theory. Inconsistencies in how the Great Firewall is implemented actually mean that in practice it might be available in some locations, and at different times. For the vast majority of China’s citizens this is not a major issue, as the home-grown 51.com, renren and 开心网 (Kaixin001) social networks are much more popular.

That said, there are an estimated half a million Facebook users in China. And expats and visitors to China are usually keen to access the social media service. For more detailed information on how to access Facebook from China, please check out our Best VPN for China guide. It is also worth noting that Facebook is not censored in Hong Kong.

Facebook is banned in Iran. In addition, the Iranian government uses specially trained “cyberpolice units" tasked with tracking down visitors to banned websites, including Facebook. We have heard reports of desperate Iranians turning to local VPN providers in order to hide their online activities. Unfortunately, although these are cheap, many appear to be government-run honeypots.

People caught trying to evade the government’s bans face arrest, interrogation, torture, jail and even death. Although I do not usually like giving in to this kind of intimidation, I strongly suggest that anyone in Iran think carefully before using a VPN (or any other method) to access banned content.

If you do consider the risk to be worth taking, then use a foreign VPN provider (one based in Europe is probably your best option) and use overseas VPN servers. Also, ensure that you use ALL the VPN security features available to you. 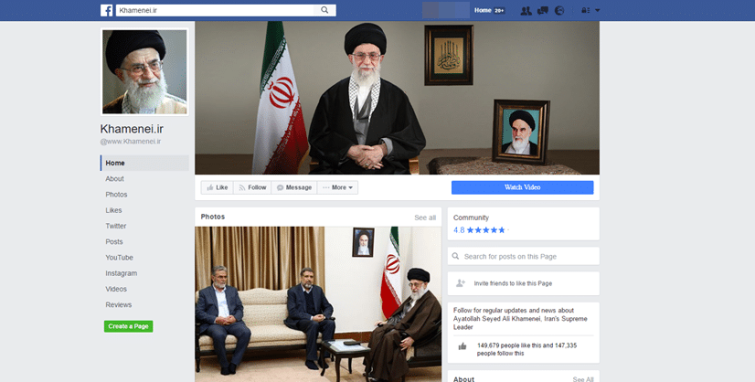 Bizarrely, given the situation, the Ayatollah Ali Khamenei not only uses Facebook himself but has run his own Facebook page since 2012 ! At the time of writing, his page has attracted some 150,000 Likes

In a world full of oppressive regimes, North Korea is the most repressive of all. The vast majority of the population has no internet access at all. China supplies some broadband lines to North Korea, so a few selected government and party officials probably do have limited access to the internet. It is very unlikely, however, that these are permitted to use this access to peruse Facebook.

Fcebook is blocked in many places due to both the government and ISIS, a VPN is a fantastic solution. However, great caution is urged dut to the political situation a ongoing war.

Facebook is “unofficially” banned, but nevertheless appears to be widely available to home users. This probably accounts for the fact that, despite the ban, 13.5 million Vietnamese people (around 15% of the population) use Facebook.

Many hotels and internet cafes have installed VPN software to bypass the ban. Visitors should beware, however, the fact that these computers are often heavily infected by viruses and other malware. Check out 5 Best VPNs for Vietnam for further discussion on this subject.

Facebook Messenger is banned in several countries. China, Iran, and North Korea have a permanent ban on Facebook and messenger. However, many other countries, including Bangladesh, Syria, Egypt, and Turkey, sometimes black out social media sites and messengers - usually during politically sensitive events such as protests. Saudi Arabia has a permanent ban on Facebook Messenger, but not on Facebook. That ban is to protect the income of the Saudi state-owned telecoms firm.

Facebook messenger also now includes "Secret Conversations" in October 2016. That service adds end-to-end encryption to conversations, using the Signal protocol. For this reason, you can expect access to Facebook Messenger to become trickier in a growing number of countries around the world. Thankfully, you can access Facebook messenger from anywhere using a Virtual Private Network (VPN).

Facebook is blocked in many countries around the world. Even in countries where Facebook is allowed, workplaces and schools often block Facebook. In this article, we have explained everything you need to know about choosing a VPN for Facebook. Depending on your particular needs, there is a perfect VPN for Facebook for you in this guide. So please be sure to read and understand every part of this article before looking at the VPN summaries.

However, if you are in a rush and want the very best VPN for Facebook then VyprVPN is perfect and outstanding value. With that said, all of the VPNs in this guide are world class, so they are all worth considering depending on your needs. If you have any questions when choosing your VPN please leave us a message: we are always happy to help.