By switching from Windows or macOS to Ubuntu, you have taken a major step towards improving your digital privacy. The next step is to improve your online security with a VPN for Ubuntu. Ubuntu and a VPN is a winning combination, however, custom Linux VPN software can be difficult to find, as most services only support Windows, Mac, iPhone, and Android. In this guide, we showcase the five best VPNs for Ubuntu, all of which have compatible ubuntu clients. 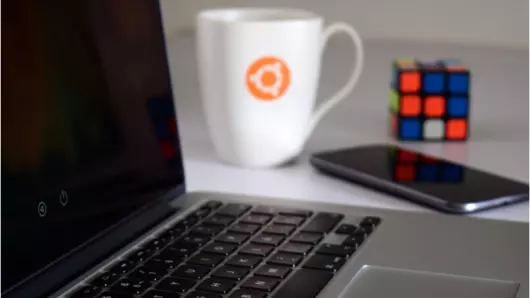 VPNs are great privacy tools, they encrypt all the traffic going to and from your computer, therefore keeping your data secure at all times. A VPN will also let you unblock streaming services from all over the world.

Not all VPNs support Ubuntu users. Along with Mint (which is forked from Ubuntu anyway), Ubuntu is widely regarded as the most newbie-friendly Linux distro available. It is also very popular as most Linux developers and Linux guides assume Ubuntu as the “default”, so Ubuntu users enjoy unparalleled levels of support (for the Linux world!).

A lot of VPN services offer manual setup guides for Ubuntu, but it can still be difficult to find a VPN service that offers customer Ubuntu VPN client. All the VPNs we recommend below offer their own custom Ubuntu software, some of which have GUI clients for Ubuntu.

Want to learn more about VPNs?

If you want more information about VPNs, how they work, and how to protect your online privacy, check out the guides listed below.

Below we list the best VPNs for Ubuntu, all of which offer dedicated Ubuntu-compatible clients. Some of these include a VPN GUI client for Ubuntu and all are easy to set up. Scroll below this list for more information about Ubuntu VPN services or click the link to see information on the provider's website.

All the custom Ubuntu VPN clients discussed below use OpenVPN, which is our recommended VPN protocol. We go into a lot more detail about their features in the summaries below, see the VPN reviews for more information about any of the service below.

This no-logs US VPN company now offers a 64-bit full GUI Ubuntu client (also compatible with Mint, Arch and Debian. Instead of a regular DEB package, the download file comes in the somewhat unusual .run format. 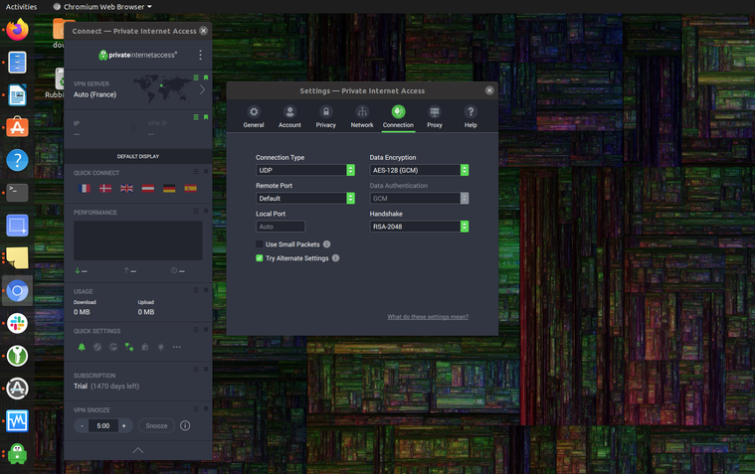 This can be easily installed in Ubuntu, however, imply by opening Terminal, CDing into your Download directory and entering (sudo not needed):

As we might expect from a full GUI client, Linux users can now enjoy all the features that Windows and macOS users take for granted. This includes a kill switch, “PIA Mace” (DNS ad and malware blocking), and fine-grained control over the OpenVPN encryption settings used.

PIA is notable for being one of the only companies anywhere that has had its no logs proven in court. It also offers a generous 30-day free trial and allows up 10 devices to connect to the service at once.

AirVPN is one of the best VPNs for Ubuntu users. This Italian-based service has a strong techie focus that our research shows put many users off. But hey, you’re a hardcore Ubuntu user, so this shouldn’t be a problem for you! And, indeed, it really shouldn’t. AirVPN is a very privacy-orientated provider, and its open-source “Eddie” client is the same deal in Windows, macOS, and Ubuntu. 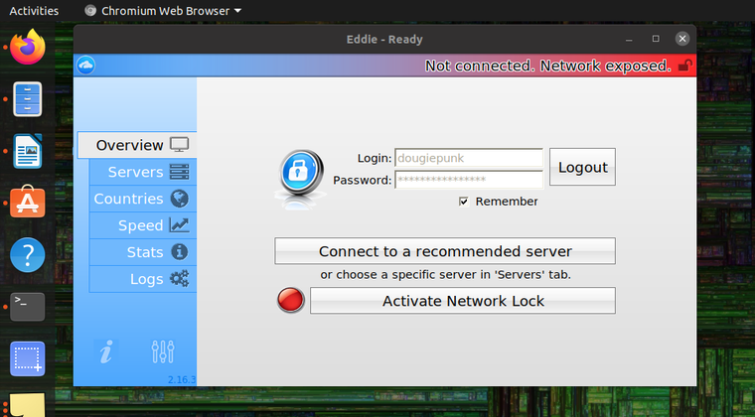 This means that Ubuntu users can enjoy a fully-featured GUI VPN client with a kill switch and full IPv4 and IPv6 leak protection. The client is also effective at mitigating against WebRTC leaks and allows port forwarding.

You also gain full access to AirVPN’s VPN through SSH or SSL tunnel obfuscation features and the ability to use to connect to its VPN servers via the Tor network for true anonymity when using the service (assuming you also pay anonymously, of course). Port forwarding is available via the web interface.

Users can connect up to five devices at once. No logs at all are kept (they are sent to a dev/null file), and torrenting is permitted on all servers.

Mullvad is a no-logs Swedish VPN service that shares a great deal in common with AirVPN, including a strong focus on techy stuff and privacy. And like AirVPN, it offers Ubuntu users the same fully-featured open-source GUI client enjoyed by your Windows and Mac-owning peers. 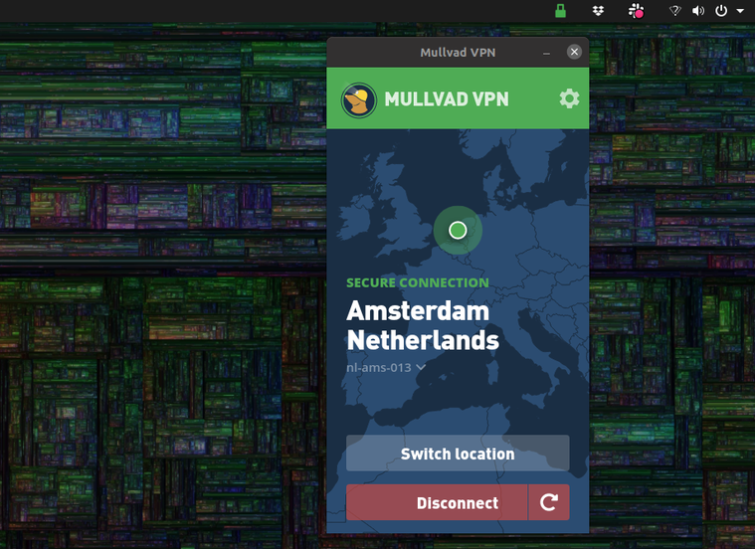 Mullvad’s client features a kill switch, and in addition to providing full DNS leak protection and WebRTC mitigation, is one only clients for any platform to actually route IPv6 connections properly rather than simply blocking them to prevent leaks. It also features port forwarding.

VPN through Tor is supported, although this requires manual configuration. Mullvad accepts payment in cash sent by post, allows up to five simultaneous connections, has servers all over the place, and is a regular in our top five speed test winners.

ExpressVPN is based in the British Virgin Islands, it is one of the most respected figures in the VPN industry. We are particularly impressed by its move to 100% RAM-only servers which ensures data cannot persist between reboots and improves security since all servers always boot from read-only disks with identical configurations.

ExpressVPN users enjoy 24/7 live chat support, a 30-day no-quibble guarantee, and can now use up to five devices at once.

NordVPN is based in NSA-free Panama. It has a strong reputation for unblocking streaming services such as US Netflix and BBC iPlayer and even throws in a full Smart DNS service as a backup (which is also useful for accessing these services on smart TV sets and games consoles).

NordVPN focuses on privacy and security, keeping no logs and offering obfuscated XOR servers.  CyberSec is a feature which uses DNS blocklists to block unwanted web ads, malware, and other security threats. It is not available on Ubuntu, unfortunately, but it is available in most of its apps so most people will still find it useful on a second device.

NordVPN’s CLI Ubuntu client is a fairly simple affair but is does offer the choice between UDP and TCP OpenVPN connections, and comes pre-configured for NordVPNs server locations. It also offers an autofill feature to make entering commands in Terminal easier. The app is available as a DEB package for Ubuntu (an RPM is also available) and is installed using the command line.

Up to six simultaneous connections are allowed, 24/7 live chat support is on hand, and a 30-day money-back guarantee brings peace of mind.

How to set up a VPN on Ubuntu?

Using a VPN for Ubuntu

Using a VPN for Ubuntu is pretty much the same as using a VPN for any other operating system. Mainly because Ubuntu is less popular, and therefore less supported than its commercial rivals, however, there are one or two quirks you should be aware of.

Why do I need a VPN for Ubuntu?

You need a VPN for Ubuntu for the same reasons you need a VPN on any computer. If you don’t know what a VPN is or how one can help you, then please check out our Beginner's Guide to Virtual Private Networks. As a quick refresher, though:

So as a privacy tool, a VPN makes a perfect companion to Ubuntu!

Custom GUI software is very rare on the ground

In fact, only Private Internet Access, AirVPN, and Mullvad offer fully-featured custom GUI clients for Ubuntu. Some VPN services now offer custom Command Line (CLI) clients, but other than coming pre-configured to connect to their own servers, these don’t usually offer anything over and above configuring OpenVPN manually.

Most VPN services offer Ubuntu support via manual CLI and/or Network manager setup guides. These are fine as far as they go, but…

Basic manual VPN setup in Ubuntu and most custom CLI clients does not push DNS requests to the VPN provider’s DNS servers. DNS leaks can be resolved, however, by modifying resolvconf to push DNS to your VPN’s DNS servers.

Alternatively, you can manually configure the iptables firewall to ensure all traffic (including DNS requests) must go via the VPN server. IVPN has written a superb guide on how to do this.

Again, neither manual VPN setup nor any Ubuntu CLI client we know of offers a kill switch designed to prevent your IP address leaking in the event of a VPN dropout or while the VPN is reconnecting. Configuring iptables as above, however, also works as a kill switch.

It should be noted that the GUI Ubuntu clients from AirVPN and Mullvad both include full IPv4 and IPv6 DNS leak protection and kill switches. They also feature all the other bells and whistles available to their Windows and macOS customers.

With the release of Ubuntu 17.10, Canonical dropped its homegrown Unity desktop as the default shell for GNOME 3. Thankfully, privacy controversies such as sending search queries entered into unified Unity’s Dash search bar to Amazon are now but a distant memory.

Some may not like, however, at the fact that Ubuntu 18.04 LTS GNOME and Ubuntu 19.04 GNOME (the latest stable distros when this article was written) continue to feature a special Amazon button in the quick-launch bar. Clicking on it opens a new browser tab with a referral code which ensures that Canonical receives a small fee for each purchase you make. 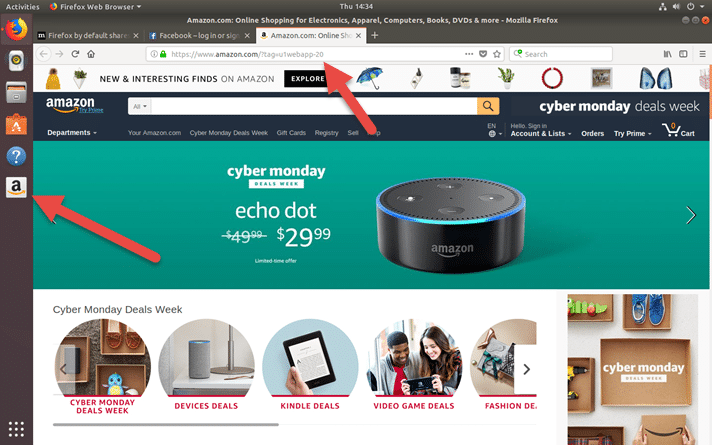 You can, of course, simply opt not to click on this button if it bothers you. But if it does, then you can get rid of it. To simply hide it, right-click on the icon -> Remove from Favorites. To remove it entirely from your computer, open Terminal and enter:

Ubuntu Unity came with some quite scary third-party privacy policies that amounted to you sharing a great deal of personal information with the likes of Facebook, the BBC, eBay, Google (via YouTube), and more.

Again, the switch to GMOME seems to address this as at heart Ubuntu GNOME is a fairly stock version of GMOME 3. Which does not share personal information with anybody. It does, however, send anonymized error reports to Canonical.

If you like, you can disable this by going to Show Applications (the grid icon at the bottom left of the screen) -> Settings -> Privacy -> Problem Reporting -> Send error reports to Canonical -> Off.

Ubuntu’s recent seismic shift away from the Unity desktop to GNOME has fixed most of the privacy issues that have plagued Canonicals’ popular Linux distro for years. Most VPN providers’ support remains firmly focused on Unity, however, all apps will continue to work just fine in Ubuntu GNOME. And thanks to Canonicals’ heavy skinning of the GNOME 3 interface to give it a very Unity-like feel, most VPN set up guides will still be close enough to follow.

It is also worth noting that almost any app designed for Ubuntu (including those from all providers listed in this article) will work just as well in other Debian/Ubuntu-based distros, such as Debian itself, Mint, Kali, and more. Most can be re-compiled to work in any flavor of Linux you choose!