FlashRouters is a US-based company that has carved out a unique niche for itself, by pre-flashing routers so you don't have to do it yourself. This review focuses exclusively on the Flashrouters App, check out our FlashRouters review for information about their hardware.

FlashRouters have developed its own DD-WRT app which works as an add-on to the DD-WRT firmware. The app allows you to switch easily between a number of popular VPN services, plus adds some very useful VPN-related features to your router. In this FlashRouters App review, we will focus on the ease of use, pricing, and more for this app, read on to find out our thoughts.

The VPN app is pre-installed free of charge on supported FlashRouters routers. FlashRouters is an aftermarket service that manually flashes routers. This requires time and expertise, so routers from FlashRouters inevitably cost more than if you buy them from the manufacturer or on Amazon.

The Linksys WRT3200ACM router I reviewed the app on, for example, costs $299.99 new from FlashRouters and $199.99 on Amazon. It is worth remembering, though, that flashing router firmware yourself is not for the faint of heart and may result in a bricked router with a voided warranty.

During February 2022 FlashRouters is offering $50 off all Linksys routers as part of its Love Linksys sale!

FlashRouters also sells refurbished routers. The WRT3200ACM, for example, is available for $199.99 refurbished and re-certified.

Alternatively, the app can be manually installed for free onto a wide range of DD-WRT routers. NordVPN currently has the best instructions for doing this on its website.

It is worth noting that DD-WRT itself supports manual configuration for any almost VPN that supports PPTP and OpenVPN. This means that if you buy a router from but don’t want to use one of the VPNs supported by its app, you can. Remember though, you will need to manually configure it, and you won’t benefit from the additional features offered by the app.

The app comes with a global kill switch which cuts off the router’s internet connection if the VPN connection fails. This is an essential safety feature that prevents your real IP address becoming exposed when this happens.

If you need further support, Live Chat is available during EST office hours or you can send a ticketed email. FlashRouters also offers free TeamViewer support if you require it. Note that FlashRouters support is only for free if you bought your router from them.

We experienced some issues with the app when we first looked at it, but we were very impressed with the response from the FlashRouters support team. It has worked hard to identify the problems and was quick to push out firmware updates once an issue was confirmed.

In order to use the FlashRouters you will need a subscription with one of the VPNs supported by the app. If you don’t already have one, then you will need sign-up for one. The links above go to our full reviews of each service, which should help you choose the best one for your needs.

To access the app, log in to the router’s DD-WRT control panel in your browser -> Status tab -> My Page. Or you can just enter “flashroutersapp.com” into the URL bar as a shortcut.

This funky new feature lets you replace your wireless network name with Emojis. 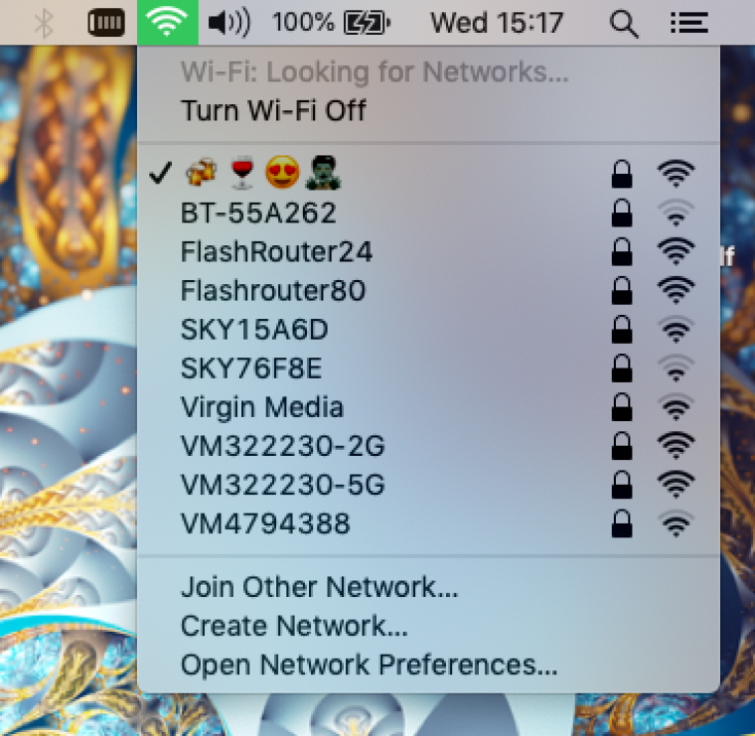 At some point in the FlashRouters may implement Emoji passwords, but that the moment this unique SSID broadcast feature is just a fun way to express yourself!

The main page of the app allows you to select your VPNs from a list of supported providers. In most cases, you need then simply enter your username and password, select a server location, and connect. 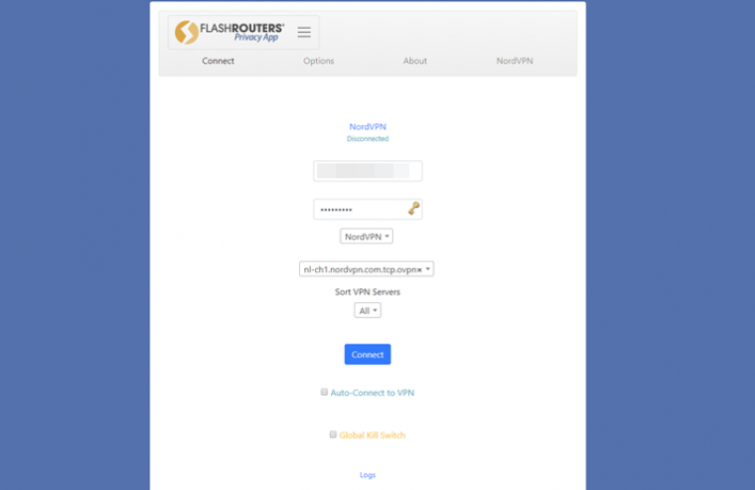 One issue that we encountered is that server location names are based on the names providers have given to their OpenVPN configuration (.ovpn) files. As we can see in the example below, in some cases these names can be quite cryptic and require a certain understanding of VPN terminology to decipher! 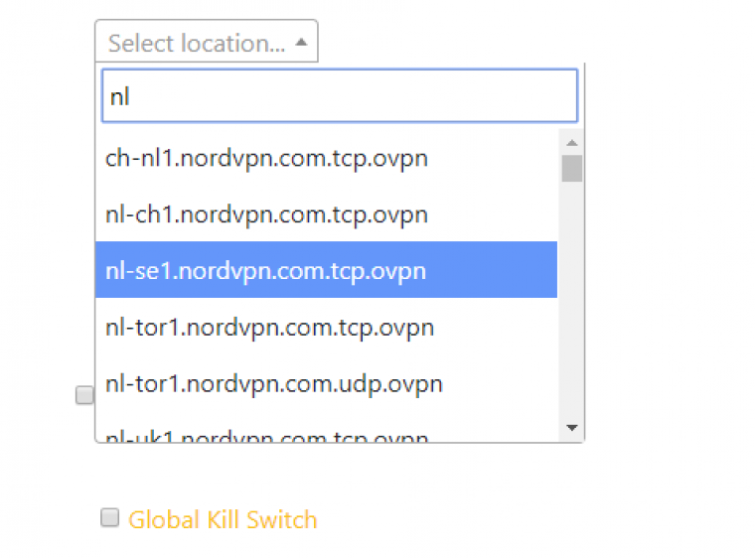 Fortunately, the app allows you to sort VPN servers by the closest one to you in a chosen country. Alternatively, you can let the app pick a server for you based on which server is the least loaded in a given country.

FlashRouters informs us that its tests show picking the least loaded server almost always results in the best performance (even more than picking the server in a country closest to you).

The main page of the app also allows you to opt to auto-connect the VPN when the router starts, and to enable the global kill switch.

Most VPNs need only a username and password to connect, but with ExpressVPN you must also paste in your user certificate and private key. Setup details and features, therefore, vary somewhat by.

A minor quibble is that if you change VPN provider, your login credentials are not saved for next time you select that provider. This issue is more a nuisance to reviewers such as ourselves though than most regular VPN customers.

In order to enable the VPN-bypass option, you need to change a setting in the regular DD-WRT interface and reboot the router. This is easy enough, though, and only needs to be done once. It worked as advertised when we tested it.

Policy routing for hosts lets you specify how particular domain names, IP addresses, or IP ranges are dealt with. Connections to specified hosts can either be forced to always go through the VPN (whether otherwise enabled or not) or can be exempted from the VPN. 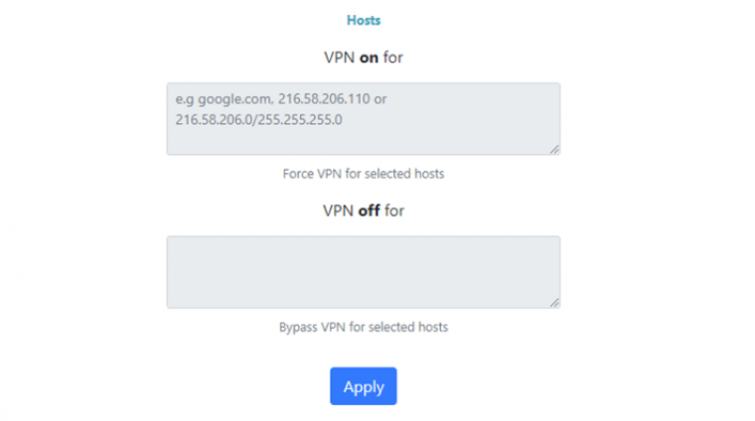 This is pretty cool but comes with a big caveat. It doesn’t work for sites or services that resolve to multiple domains, which includes Netflix, Amazon, BBC iPlayer, and many other popular streaming services.

Given that exempting streaming services in your own country which otherwise block VPN connections is a major reason to want this feature, this is a little disappointing. It can be very useful, however, for exempting personal FTP servers and self-hosted gaming servers. It is also possible to bypass the VPN for multiple domain websites by exempting dedicated streaming devices using the device routing rules.

We ran IPv4 DNS and WebRTC leaks using ipleak.net. We were unable to test for IPv6 leaks, as IPv6 connections are not supported by our ISP. No DNS leaks or WebRTC leaks were detected on any tested platform, including Windows, macOS, and Android.

We weren’t so sure about:

The FlashRouters DD-WRT app is by far the easiest way to use a VPN on a router. Most good VPNs are now supported, the kill switch works well, and policy routing allows you to fine-tune how devices use the VPN. Although not strictly necessary and all DD-WRT routers can run a VPN anyway, these features make the FlashRouters app a very nifty thing to have.