Opera VPN is a completely free “VPN” built into the desktop versions of Opera browser. The reason we have added quote marks around “VPN” is that it is, in fact, a browser proxy rather than a true VPN. But hey, it’s free, has no data limits, and generally works well. So why quibble?

Opera is the fifth most popular browser in the world, and enjoys a relatively small (350 million users) but loyal fan base. This is in large part due to its pioneering of cutting edge technologies that are actually useful, such as Opera Turbo (compression technology designed to speed up web browsing) and built-in ad-blocking.

It is a fast and lightweight browser that can compete on features with the likes of Google Chrome and Mozilla Firefox. Unlike Firefox and its derivatives, though, it is closed source.

Opera is available for most platforms, but its free VPN is only featured in its Windows, masOS, and Linux versions. Update March 2023: the free VPN is now also available in Opera Browser with VPN for Android, but not Opera Touch for iOS. In Android, the VPN works pretty much identically to how it does on the desktop, as described in this review.

In this Opera VPN review, we take an in-depth look at various aspects of this service, including; features security and performance. We also show you how to set up OperaVPN on your device!

Free option
Available
Visa/MasterCard
No
Amex
No
PayPal
No

Opera VPN is a VPN service that works with the fifth most popular browser in the world, Opera has always maintained a small but loyal fan base. This is in large part due to it pioneering cutting-edge technologies that are actually useful, such as Opera Turbo (compression technology designed to speed up web browsing) and built-in ad-blocking.

Given that Opera acquired Canadian VPN service SurfEasy last year, it is hardly surprising that Opera has decided to integrate VPN technology into its flagship browser. According to Steve Kelly, Vice President of Marketing at Opera, the reason for the move is to improve users’ privacy and security.

“Everyone deserves to surf privately online if they want to. Today, it is too difficult to maintain privacy when using the web, and way too many people experience roadblocks online, like blocked content. By releasing an integrated, free and unlimited VPN in the browser, we make it simple for people to enhance their privacy and access the content they want.”

It is 100% free to use the VPN bundled with Opera, and there are no data limits. This in itself makes the service one of the most generous free VPNs around. Whether Opera will continue to offer this level of service is, of course, anyone’s guess.

Five VPN server locations are available – Canada, the US, Germany, the Netherlands, and VPN servers in Singapore. This is more limited that most commercial VPN services, but hey… it’s free! It also covers a good selection of popular VPN server locations, although the UK is conspicuously missing.

This means that you will not be able to use Opera to watch iPlayer. Unfortunately, those wanting to access the US version of Netflix are also out of luck… when I tried, Netflix successfully detected that I was running “a proxy” and refused to play. However, this VPN is able to unblock Youtube videos that are restricted in your region.

Opera Software ASA is a Norwegian company with offices in Poland, Sweden and China.  As of November 2016, however, it is mainly owned by a Chinese consortium based in Hong Kong and headed by billionaire businessman Zhou Yahui. Where this leaves the "VPN," and under which jurisdiction it operates under, is very unclear.

Opera Software ASA sold the consumer browser division to the Chinese consortium, but this does not appear to include the "VPN" infrastructure which, as far as we can tell, remains in Opera Software ASA's hands. But Yahui Zhou has served as the company's Chairman of the Board and Chief Executive Officer since June 2016...

Although rated 100 out of 100 in Freedom House’s Freedom in the World 2023 report, Norway is a member of the US-led Nine Eyes spying alliance and performs extensive domestic surveillance. All ISPs and telecoms companies are required to store records of metadata and web browsing histories for six months, although it is not clear if this applies to VPN services.

China is very keen on restricting its citizen's access to the open internet, and polices domestic dissent through monitoring online forums and social media platforms. Despite many suspicions, however, there is no evidence that it has any interest in listening in on the internet traffic of international internet users.

Hong Kong has traditionally enjoyed a very free and open internet, although tensions with a Chinese government keen to exert greater control over the ex-British territory raises suspicions that it may be subject to increased surveillance from the mainland.

Just to confuse matters further, the privacy statement for non-EU members refers to "Opera Unite Pte. Ltd. ('Opera'), an Opera group company" which is based in Singapore....

"When you use our built-in VPN service, we do not log any information related to your browsing activity and originating network address."

OperaVPN is proxy, not a VPN service. Connections are secured using HTTPS, the encryption scheme which protects sensitive websites, making OperaVPN an HTTPS proxy. Because it is based on Chromium, the Opera browser supports TLS 1.3. This is the latest version of the protocol,  and it is reasonable to assume that the VPN also uses TLS 1.3.

There is little in the way of support for the VPN feature, although it is so simple to use that it hardly needs it. If for any reason you do get stuck, you can ask questions on the Opera forums.

How to setup OperaVPN 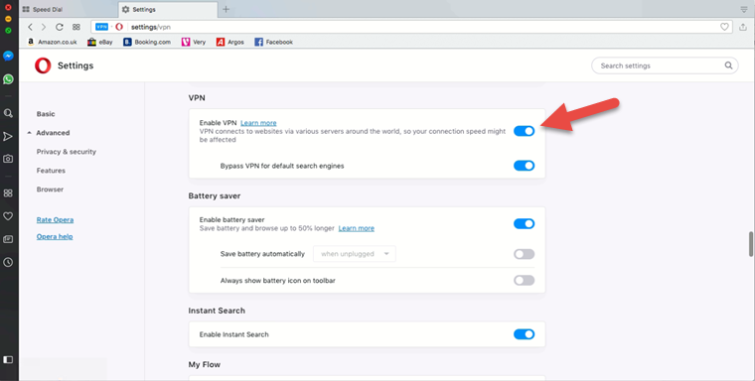 Once the software is installed, you must enable the VPN feature by going to Menu -> Privacy & security -> VPN -> Enable VPN. Note that I had an old version of Opera installed, and needed to uninstall it and reinstall the latest version in order for this option to become available. 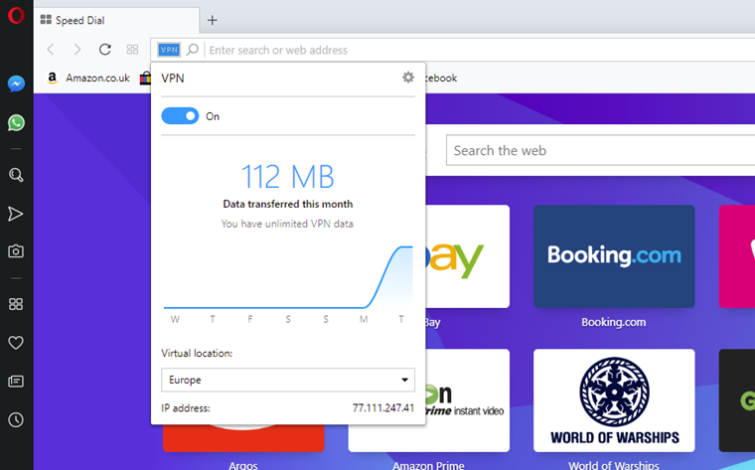 Using the VPN is then just a matter of clicking on the “VPN” label to the left of the Search/URL bar, selecting a server location, and clicking “On”

It is worth noting that the VPN feature looks very similar to the SurfEasy browser extension (although this should hardly come as a surprise). Unlike that extension, however, the VPN bundled free with Opera does not have a 500MB data limit.

Opera has removed it's Android VPN and iOS VPN apps from their respective stores. Unlike the desktop feature included in the browser, these were are true VPN apps. But this is academic as they are no longer available.

If you are an android user and you are looking for something similar to Opera, check out our VPN browsers for Android article for a list of alternatives.

Alternatively, if you are an iOS user, you may want to check out our free VPNs for iOS list. These services are slightly different to VPN browsers like Opera VPN, however, they route all the traffic from your iOS device through an encrypted tunnel which is more secure. 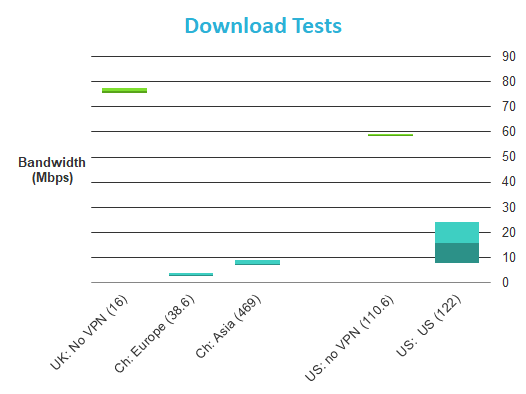 These results are pretty darn good, especially when you consider that the service is free! Color me impressed! 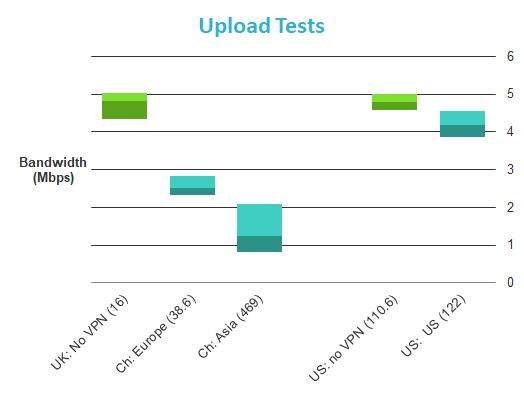 WebRTC leak protection is now built-in. This is great!

From a privacy perspective, as far as Google is concerned your DNS requests will appear to come from Opera (rather than your real IP address).

Free is everyone’s favorite price, and in many ways, Opera’s free “VPN” delivers a fantastic service (although it is really a proxy for the browser, not a VPN). Unlike most free VPN services, it is both unlimited (no data limits) and fast. For those simply wishing to bypass censorship, geospoof their location, or protect their browsing while using public WiFi hotspots, Opera may hit just the spot.