The Pozio dock is a nifty little device that prevents your voice assisted smart speaker from listening to you. That might sound counter-intuitive, but the Pozio dock is designed with privacy in mind, and promises to keep your personal conversations out of the hands of big data corporations like Amazon and Google – so you're only heard when you want to be.

I was lucky enough to play with, and review, a prototype sample of the new Pozio dock – and if first impressions are anything to go by, this could be one of the most important new technologies for securing your privacy!

Pozio claims that it's incredibly easy to prepare the dock for use – and I'm happy to confirm that it very much is!

Switch the power on, and you're done. It's that simple!

The first step in the setup process involves placing your smart device inside the Pozio dock. This was easy enough, and my Echo Dot fit inside the dock nice and snugly.

Next, the Pozio dock itself needs to be plugged in. Again, this wasn't a problem for me, seeing as I had an unused outlet right next to my Echo Dot, but it's worth bearing in mind that you'll need an additional socket for your Pozio product.

The Pozio dock's singular purpose is to prevent your smart devices from listening in on you without your permission – but what about when you want your Echo Dot or Google Home Mini to hear you? Well, there are two ways to converse with your smart speaker. If you want to issue your speaker a quick command, like turning off a light or setting an alarm, you can temporarily disable the Pozio dock by saying "Pozio, stop" and waiting for a beep. You'll then have thirty seconds to talk to your speaker. The Pozio dock's LED ring will also glow white and begin to fade in order to give you a visual cue of how much time you have remaining.

That's all good on paper, but in practise, I had some difficulty. The Pozio dock didn't always register my voice commands (meaning my neighbors got to hear me say Pozio, stop a dozen times), and I also found that the device can be finicky about the surface you place it on, and how you place it.

You can temporarily disable the Pozio dock by saying "Pozio, stop" and waiting for a beep

The Pozio dock registered all my commands when I was holding it during my initial testing phase. When I set it down on a TV stand, however, it had more trouble hearing me.

It may be that the mic itself isn't sensitive enough to pick up commands from across the room. However, considering that ease-of-use is one of the Pozio dock's main selling points, this was a little disappointing, and I sometimes had to repeat myself. Oddly, it seemed to work better when I positioned the device so that the hole underneath hung off the edge of my TV stand – which felt pretty precarious, albeit somewhat effective.

This is likely something that will be fixed when the product launches on Kickstarter, so while I'm not putting too much weight on it.

If thirty seconds isn't long enough, you can give yourself more time to talk to your smart speaker by pressing the button on the Pozio dock. This is the glowing button right at the top of the device.

Once you've pressed it, the Pozio dock will beep, and the LED light will turn dark blue and pulse to let you know that your virtual assistant is now listening to you. Issue your commands as you see fit, or perhaps just ask for a joke or pick-me-up, and when you're ready to enable your Pozio dock again, press the button!

Unlike the voice command, this button method worked every time, and I do like that I had the option to switch the Pozio dock off for as long as I like. However, the fact that this required physically pressing a button (rather than issuing a new voice command) does remove some of the accessibility from the smart speaker. Again, it's likely that they may integrate this feature in later iterations of the device, so I'm excited to see what the next version is like.

The Pozio dock is a straightforward device; it's not riddled with a dozen tiny buttons, and you don't need to spend hours pouring over a manual to figure out how it works! Once you've got your speaker tucked into the dock, you're ready to go, seeing as the Pozio dock is always on and safeguarding your privacy.

A simple and effective solution for the privacy-conscious smart home

I like that the Pozio dock lets you thread the cable of your smart speaker through a hole in the dock – it's a nice consideration that makes cable management a lot easier. You'll be able to position your Pozio dock neatly on a desk, stand, or wardrobe and conceal those unsightly cables.

The LED light on top of the device is another simple, but effective, feature. It'll be off for most of the time, but glow white (and slowly fade) when you issue a voice command and pulse blue when you press the main button. As such, you have a clear visual reference for what your dock is doing and whether your speaker is listening to you.

How does it work?

Pozio explains that its line of devices uses proprietary Listening Blockers developed by security and privacy experts to prevent your smart speakers and virtual assistants from eavesdropping on your every word. Subsonic frequencies render these devices practically deaf until you decide that you'd like to be heard.

I particularly like that Pozio decided to tackle the "always listening" issue of smart devices from an audio perspective, rather than relying on more complicated (or vulnerable) technical or network solutions. The beauty of the product is very much in the fact that anyone can plug in a Pozio and trust that their private conversations remain private.

No data is stored on the Pozio dock itself, and it doesn't require a connection to the internet (so the device can't be hacked or spoofed, either!) – all you need is a plug socket and some space on the nearest TV stand or table.

Additionally, Pozio has confirmed that its products are not harmful to pets, which is always brilliant news!

It's important to note that the Pozio dock that informed this review was a pre-launch prototype, and that the products customers will receive from the Kickstarter will be polished, fully-realized versions! As such, please keep in mind that the issues that I experienced may not be present in the final Pozio product.

I hope this is the case. I'd love to see the Pozio dock get better at hearing commands regardless of the surface it's placed on. Additionally, the button on top of the device was oddly difficult to push – which isn't satisfying, and it can be hard to tell if you've even pressed it at all! This is a relatively small complaint in the grand scheme of things, but still a quality adjustment that could massively improve the overall feel of the product.

Based in Canada, the Pozio team is determined to safeguard consumer security whilst maintaining the utility of smart speakers and other virtual assistants, stating:

Pozio is on a mission to provide trusted, arms-length control over devices that are always listening or watching our daily activities.

The Pozio product line includes the Pozio dock smart speaker dock, which was the star of this review, as well as the Pozio Cradle, which differs from the former in that it also doubles as a wireless phone charger. You'll be able to use your Pozio device with existing smart speakers, including the Google Home Mini, and 2nd and 3rd generation Echo Dot.

If you'd like to get your hands on either Pozio device, you'll need to check out the company's Kickstarter campaign! The Pozio Cradle will be available to early investors, whereas the Pozio dock will become commercially available later in 2022. 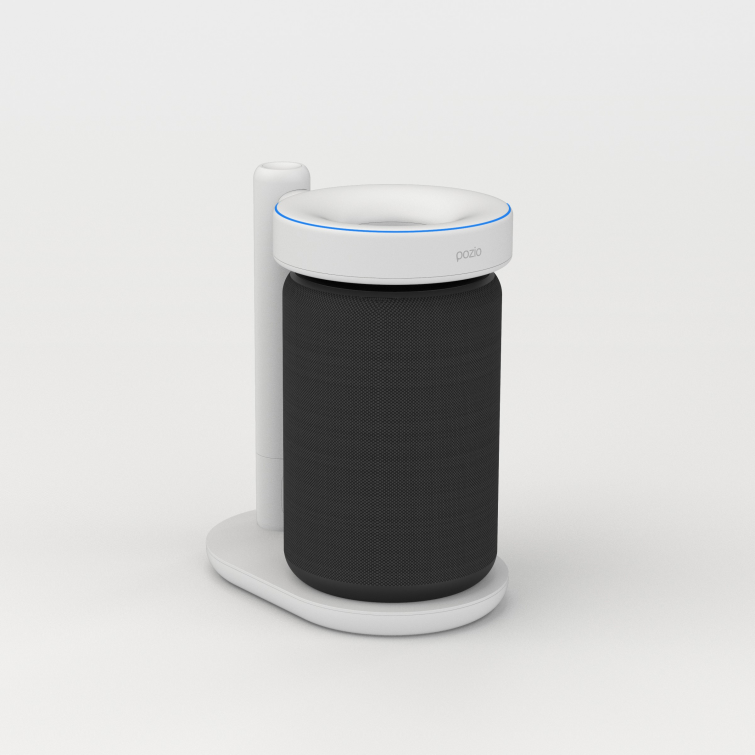 Initially, you might wonder why exactly the Pozio team decided to develop the Pozio dock – after all, our smart speakers are supposed to listen to us, aren't they?

Well, yes. But that's the problem; we've become completely nonplussed by the idea of having these voice activated devices in our homes, cars, and pockets. We're aware, but unconcerned, that they're listening to us. It's a peculiar privacy paradox. We wouldn't agree to have our private conversations recorded by a stranger, so why is it okay to have an Echo Dot or two in the house, or a Google Home Mini in the bedroom?

Some folks will argue that the functionality of these devices outweighs any potential privacy concerns. It's rare to find a home that doesn't have a smart speaker perched on a table or TV stand, somewhere. In 2020, it was estimated that more than 60 million people in the United States owned a smart speaker!

Over 60m people in the US own a smart speaker

However, there are folks out there that remain wary of smart speakers – and with good reason. Bloomberg reported in 2019 that users' audio recordings were being listened to by real humans, and cybersecurity experts remain wary of Google and Amazon's data-hungry reputation. It's also difficult to discern where your data actually goes and what, if anything, it's used for, seeing as the Amazon-owned smart doorbell device, Ring, gave police access to user footage in 2019. In addition, Google Home devices were affected by an error in 2020 which caused them to record their users at all times, without being prompted – which is a hugely worrying precedent!

Google and Amazon have taken steps to address these concerns. With the release of the Echo Show 10, users will be able to decide whether they want their audio recordings processed locally on the device itself – meaning that the audio won't be sent to the cloud, or Amazon's servers. Privacy advocates remain unimpressed and vocally critical about the companies' drive to normalize surveillance, however. After all, it doesn't really matter how cute the new Amazon Astro is when it's bringing facial recognition directly into our homes.

Pozio's pricing might seem steep, but considering the unique nature of the product, and that it's a one-time payment, I really think it's worth the money to not have your devices listening to your every word. With that said, the pricing differs for each dock, and the features they come with.

Ranging from $199–$279 (CAD), the Cradle is a handy device that you can use to block out unwanted eavesdropping, charge your phone, and if you opt for the more premium version, it can even play music! 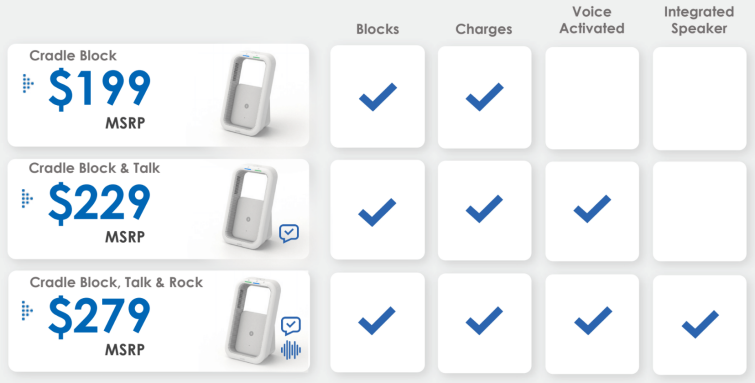 The Shield is similarly priced, offering different sizes to fit the needs of your virtual assistant, and increasing in cost to reflect the additional materials. 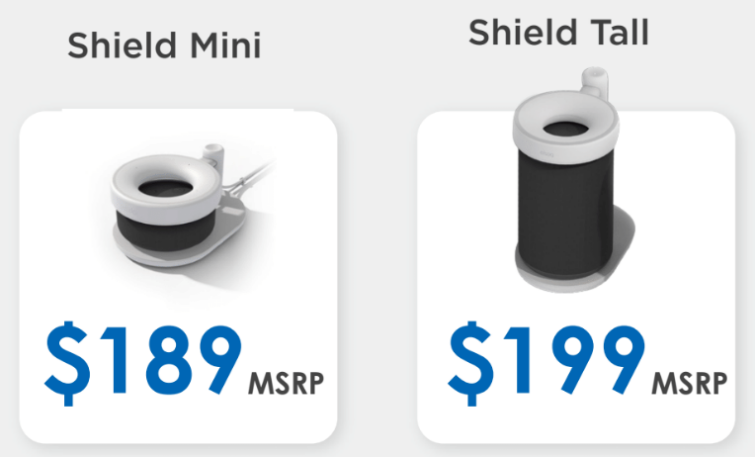 And the low points

Pozio says to imagine the Pozio dock as "earplugs for your virtual assistants", and I like that analogy! There's nothing overly techy about the Pozio dock. It's a simple solution to a security concern that only grows more and more acute as the years pass and we integrate more surveillance into our homes. As such, I think anyone with a vested interest in safeguarding their privacy needs to check the Pozio products out – so keep an eye on that Kickstarter!