OkayFreedom is a VPN by the German technology company, Steganos Software. The VPN is available for Windows only. The company offers a free ad-supported version of the VPN, but the paid service is available on a yearly plan that is really inexpensive. If you want a VPN for Android, an iOS VPN, a VPN for Mac or a Linux VPN, you will have to consider another VPN.

The paid VPN service has the following features:

The free VPN gets exactly the same service as the paid plan except that users have to look at an ad every time they connect and disconnect, and have a data throughput limit of 500MB per month.

Although the sales page of the site says that you can use the VPN for P2P downloading, the Terms of Service states that downloading copyrighted material without permission is not allowed.

Users of both the paid and free service get access to the company's 19 servers.

Does OKayFreedom unblock Netflix and other Streaming Services?

I tested access to streaming services while connected to USA server and the Great Britain server of OkayFreedom. I wasn't able to get into Netflix in the United States either through the browser or through Kodi. I had the same results with Netflix UK.

I conducted speed tests of the OkayFreedom VPN service through the Windows VPN app. I used IPLocation.net to detect the physical location of the servers accessed for the test. The USA server was found to be in Wayne, Pennsylvania, and the Canada server was located in Montreal. I tested both of these servers on a connection to Miami and compared them to speeds on the same connection without a VPN active on the line.

For a transatlantic speed test, I compared the speeds on a connection to a test server in London with and without the OkayFreedom United Kingdom VPN server managing the connection. IPLocation reported that the UK server was located in Gloucester.

In each test case, five test runs were performed with testmy.net from the Dominican Republic. 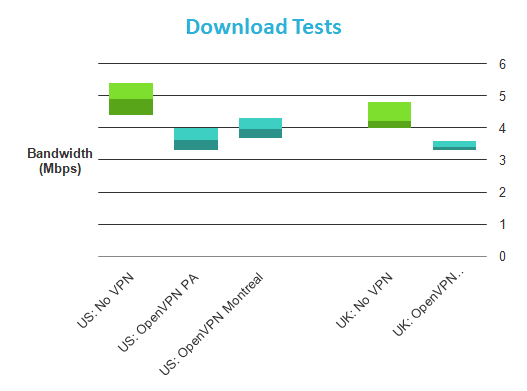 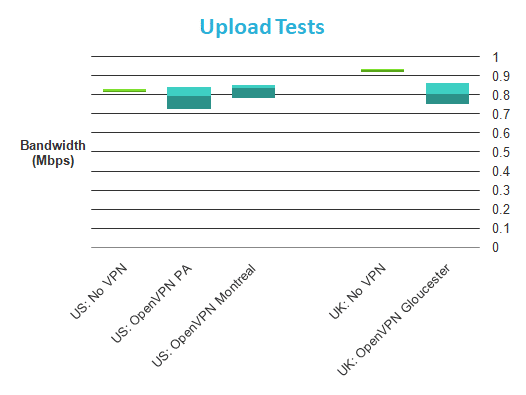 The test sites ipleak.net and our very own VPN leak test gave information on the detected IP address of my connection and the DNS servers that the system accessed. IPLeak saw my location as being in the United Kingdom. The site examined the DNS servers used by my computer. The site detected access to 57 DNS servers, all in Belgium. DoILeak only found two DNS servers, both in the Netherlands. However, neither IPLeak nor DoILeak detected my real location, which was in the Dominican Republic. So, OkayFreedom successfully hid my true location.

You have two options with OkayFreedom - a free version and a paid version. The free version has a data limit of 500MB per month and is ad-supported. You can only subscribe to the paid version for a one-year period. 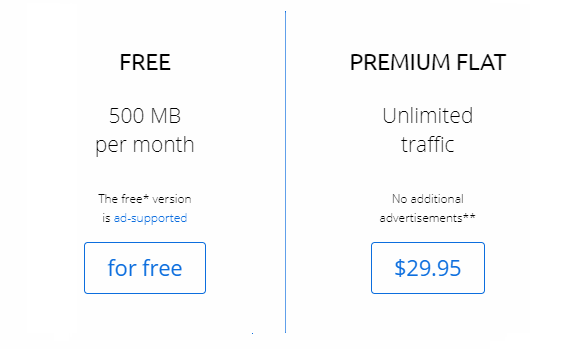 Payments are collected by Cleverbridge AG, a German company that also processes payments for Avira, Malwarebytes, and the VPN service CyberGhost. You don't get lumbered with a repeat billing agreement on your account, you just get the one year of service that you agreed to. You can pay for the service with credit cards, PayPal, SOFORT Banking, and bank wire transfer.

If you live within the EU, your bill will include VAT. However, the company takes that extra cost as a hit on its profits, so you don't pay any more for the service.

You get to the free VPN by clicking on the big button at the top of the Home page, or by selecting the free plan from the package comparison section further down the page. Either route will get you to a Cnet download page.

The install process requires you to enter an email address. If you feel uncomfortable giving your regular email address then create a new webmail account.

The installation process installs an extension on your browser.

The extension doesn't actually do anything for you.

OkayFreedom is only available for Windows.

OkayFreedom keeps its website simple. The design of the site is very stylish, but it has very few pages and almost no information on how the VPN works. There isn't even a menu at the top of the page. 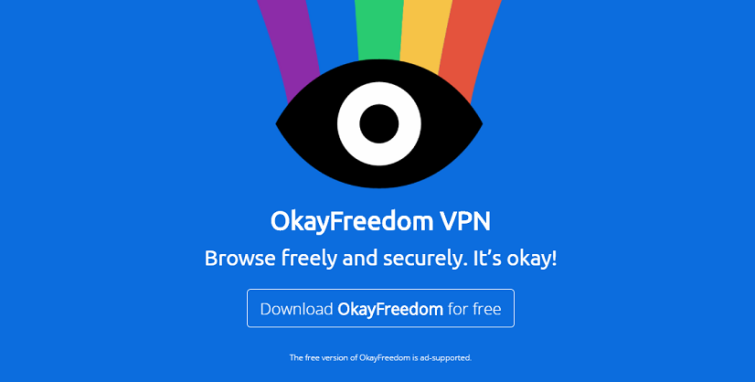 Unusually, the menu function is fulfilled by the site's footer.

There is no account area on the site and no installation instructions. The company seems to have great confidence that the app will work well.

If you want to get rid of the ad pop-ups in the OkayFreedom app, you will have to pay for the service. Buyers also get the data throughput limit lifted so they have an unlimited service.

You have to enter your name and address in this screen. This information isn't kept on file by Steganos Software, but is held by Cleverbridge.

The next phase of the purchase is the invoice. Don't worry about the VAT that gets added to your bill if you are in Europe - it doesn't increase the price of the service.

The installation process creates a shortcut on your Desktop.

When the installer finishes the app opens automatically. The first time you visit the app, you get a run-through of the features of the service. 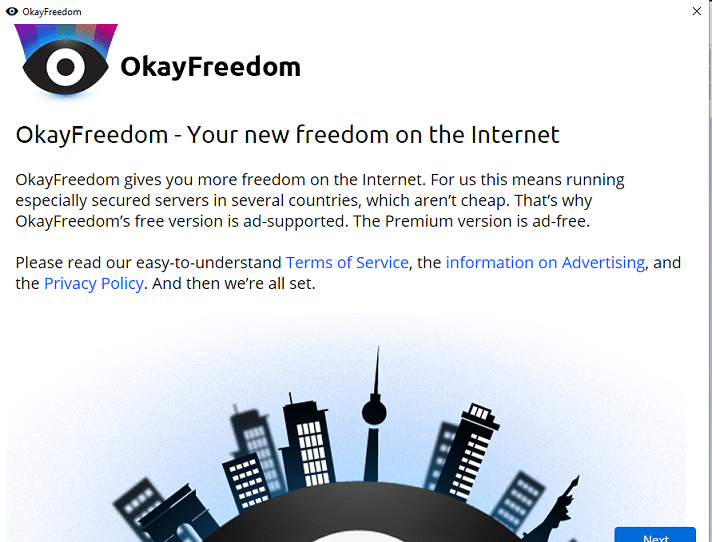 You don't need to sign in to the app. In fact, there isn't really an app. The interface for the VPN operates in minimized mode. You will see an eye icon in the system tray of the Desktop. You may have to click on the up arrow if it is stored in hidden icons.

Click on the icon to open the app. All you will get is a menu pop-up. 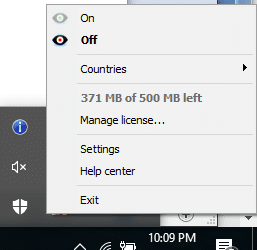 The Settings menu has very few functions. However, it does enable you to change the language of the interface. 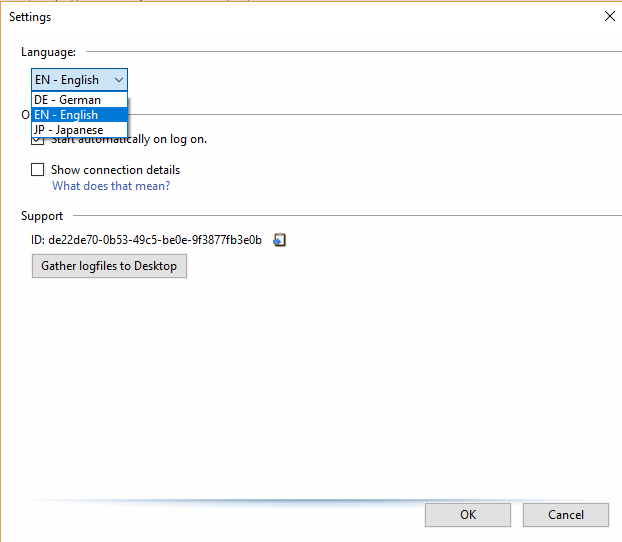 Before you can turn the VPN on, you need to pick a server location. You do this by moving your mouse to the Countries menu item. This opens up a submenu that lists all available server locations. The currently selected server is shown in a bold typeface. 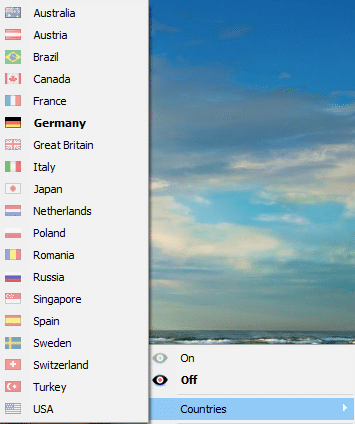 If you are using the free VPN, you will be shown an ad for the paid service when you press "On", and also when you turn the VPN off.

All support functions are concentrated on one page of the site. This has an FAQ section and a contact form.

OkayFreedom is a very cheap service and one of the costs they seem to have held down is the operating budget for the Customer Support department.

Replies to queries are promised within three days, which isn't much help if you are in trouble. I received a reply to my query after 15 hours, which is better than the 72 hours that the company gives themselves to answer, but still, a long delay if you need urgent help to get the system working.

As frequently happens with support desk responses, the reply I got wasn't complete, and so required another exchange of emails, so a long response time for one query can spin out into a process lasting several days, involving a series of emails in order to get a problem fixed.

The help desk team is probably outsourced and paid per solved query. My query about the encryption used by the VPN never got answered, so you should be aware that the customer support team won't be much help to you.

Some of the smaller VPN companies, such as OkayFreedom VPN, don't make technical details available on their websites. Perhaps they figure that their target market is the general public and those people would be put off by complicated facts.

Although this is a good strategy to take for a sales pitch, VPNs offer privacy and the security systems that they use to provide that protection. If providers aren't open about encryption implementation, it gives the impression that they have something to hide. Some VPNs don't actually use strong encryption and so they offer no privacy protection at all. Naturally, it is services that are rubbish that are most likely to keep quiet about their encryption.

OkayFreedom VPN's website states that the app uses OpenVPN with AES encryption, using a 256-bit key. This is very good security. However, that AES key has to be distributed and it would be nice to know which method of encryption is used to protect the session establishment phase of the VPN.

A fair guess would be that the OkayFreedom VPN uses RSA encryption for session establishment. However, as the support staff refuses to answer this question, it can only be assumed that OkayFreedom either uses very weak RSA encryption or no encryption at all. RSA can have a key of 1024 bits, 2048 bits or 4096 bits. The RSA company admits that a 1024-bit key can be cracked. If the distribution of the AES key is not properly protected, the entire session can be decrypted by snoopers.

When it comes to internet security, it is advisable to plan for the worst. Therefore, in the absence of other information, it is better to assume that OkayFreedom is not secure.

Cleverbridge delivers the same account anonymity to OkayFreedom VPN customers as it does for CyberGhost's customers. The VPN company has no account details on file for its customers. However, OkayFreedom does collect your email address after you install the app.

The installation ends with the addition of a browser extension for Chrome or Firefox, depending on which browser type you accessed the download file through. However, there is no obvious function for this extension. It can't be opened and so it could be monitoring activities. There is no mention of the company's site of the purpose of this extension.

However, the Privacy Policy on the site declares: "The OkayFreedom service saves neither addresses nor content accessed by the user, the IP address that OkayFreedom assigned to them; nor the user's own IP address through which they are using OkayFreedom." That's great news. The absence of any identifiers means that no matter what information the company stores, it can't be traced back to you.

OkayFreedom is very easy to use, so it will suit people who don't want to fuss about networking technology and just want a VPN that does the job. The company contradicts itself on the subject of torrenting. The main page of the site says that file sharing is allowed, but the Terms of Service says that it isn't. It would be better to err on the side of caution and choose a different VPN if you particularly want protection for downloading.

The minimized app seems to be an adaptation of a system called OpenVPN GUI. That interface is produced by the organization that manages the OpenVPN standard. That interface is good and offers protection for connections. However, it lacks the extra security features that other VPN company's build into their custom apps. The biggest absence in the OkayFreedom system is a kill switch. The lack of a kill switch means that this service wouldn't be suitable for those who live in countries with repressive regimes and/or irregular internet service. In these circumstances, a brief IP leak could be enough to get a visitor to restricted sites in trouble with the authorities.

Okay Freedom is very cheap, and it is always nice to come across a free VPN. However, those who need cast iron privacy should look elsewhere for a better VPN. 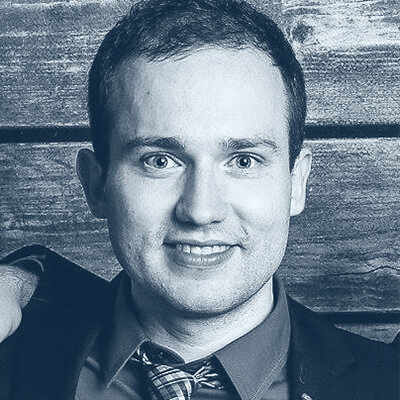