ProPrivacy is reader supported and sometimes receives a commission when you make purchases using links on this site.
Written by James Milin-Ashmore

Selecting a Virtual Private Network (VPN) can be a difficult task. Even if you’ve narrowed it down to a couple of top providers, it can be tough to pick between them. In this NordVPN vsNorton Secure VPN comparison, we pit two popular services against each other to see how they match up in a number of key areas.

NordVPN is one of the elder statesmen within the online privacy sector, and it’s a capable provider that offers a strong mix of performance and privacy. Norton Secure VPN is often packaged with other tools such as a password manager and antivirus as part of Norton 360. Both will get the job done, but the services differ in a number of key respects. Read on to find out which VPN wins in this head-to-head battle.

NordVPN vs Norton Secure VPN - Which is best?

Both NordVPN and Norton Secure VPN are capable in terms of offering secure encryptions, decent server speeds, and reliability, but which is best overall? If you’d prefer a quick answer, there’s a clear winner.

NordVPN has lots of features, and is likely to be more suitable for the majority of would-be users. It offers extra servers, faster speeds, and can even work out to be cheaper.

NordVPN has a monthly plan that costs a flat fee of $11.99 USD, which is in line with its reputation as a premium service. It will cover up to six simultaneous device connections.

Norton Secure VPN does things a little differently, with three different plans depending on whether you’d like to secure one, five, or 10 devices simultaneously with a single account. These plans are priced at $4.99, $7.99, and $9.99 per month, respectively. 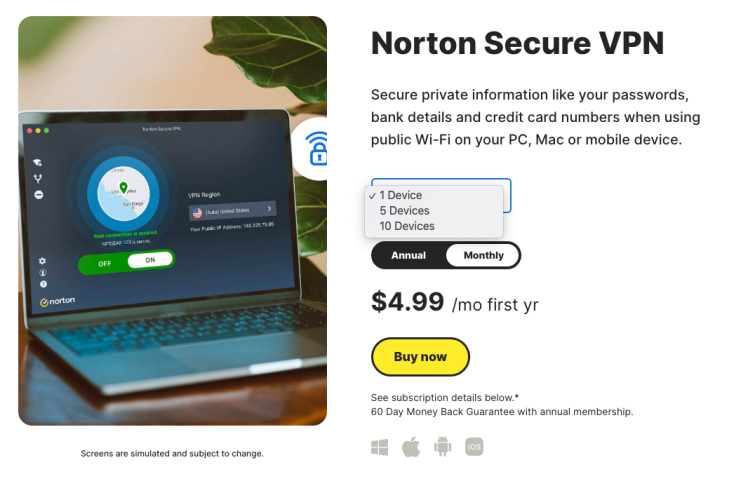 While it’s the more affordable monthly option even with the extra device connections, Norton Secure VPN ($59.99) is slightly more expensive when looking at annual deals. NordVPN offers one year of coverage for $59.88, working out to be a total of 11 cents cheaper. However, Nord’s two-year deal ($99.63) further reduces the price to only $3.69 per month.

As such, it’s fair to say that NordVPN is the more affordable provider overall. However, it’s worth mentioning that Nord has a 30-day guarantee money-back guarantee, while Norton Secure VPN offers a generous 60-day guarantee.

In terms of payment methods, Norton accepts credit cards, PayPal, or Google Pay. As well as traditional methods, NordVPN also allows for payment via cryptocurrencies, which is great from a privacy standpoint.

Which has better features

Most VPNs can handle the basics, in terms of connecting to servers worldwide, and assigning the user with a new IP address. Therefore, features are one of the best ways to differentiate between services.

There’s a clear winner in this comparison if you’re hoping for lots of additional features from your VPN.

Let’s start with their respective networks. In terms of servers, NordVPN is the more impressive service of the duo by a significant margin. It has double the number of locations on offer, and lots of servers to choose from. (In truth, the size of Norton’s network leaves a lot to be desired.)

In comparison, NordVPN offers ad-blocking, tracker-blocking, Double VPN, Tor over VPN, obfuscated servers, Smart DNS, and a variety of extra features that help it to stand out, and most are available across all apps.

Installing a VPN directly onto a router is important for many users. It gives you the ability to use a VPN on numerous devices that lack traditional support, such as games consoles, smart TVs, and IoT devices.

A VPN router will work to protect multiple devices, and will conceal your IP address from the online services your household uses.

Unfortunately, Norton Secure VPN doesn’t support installation on routers, handing the win to NordVPN by default. It sometimes feels like Norton’s VPN is an afterthought, or is seen as another extra that can be tacked on to Norton 360 packages without much effort.

As for NordVPN, it has set up guides for a wide range of popular routers. This includes DD-WRT and Tomato firmware, AsusWRT, pfSense, OpenWRT, and more. You’ll also be able to buy a pre-flashed router with NordVPN installed if you’d prefer.

What services do they unblock?

A quality VPN will be able to bypass international geo-restrictions, allowing the user to access multiple blocked services worldwide. As such, a large network of servers is great for accessing restricted content.

Once again, NordVPN would be our pick for accessing locally censored content, whether it’s streaming platforms, torrents, or anything in between. As you can see, Norton struggles to access a number of popular services in comparison. (NordVPN’s streaming capabilities are one of its major perks.)

One streaming service Norton is able to access is Netflix, although it won’t give access to as many libraries as NordVPN. (With Nord, users can access 13 Netflix libraries.)

Norton will unblock Netflix US, but it’s great to have the ability to unblock other international Netflix catalogs too. In a recurring theme, we’d recommend Nord if you’re interested in using a VPN for streaming.

Check out our page about how to unblock regional Netflix catalogs for more information.

Torrenting is a big deal for some users, as it’s one of the easiest and fastest ways to share large files. VPNs tend to offer improved privacy and security for torrents, but only some will allow for file sharing.

While NordVPN doesn’t offer port forwarding, it does have dedicated servers for torrenting. This ensures great connection speeds, and you will be able to download content without being tracked by your ISP, the government, or even copyright holders.

Despite decent speeds and servers located worldwide, Norton Secure VPN does not allow Peer-to-Peer connections on any of its servers. It’s a disappointing result for the provider.

Most VPNs allow for P2P file sharing to some extent, so it’s another notch in the W column for Nord.

How do the providers perform when it comes to setup and general usability? Both Nord and Norton have custom apps for the most popular platforms, such as Windows, Android, macOS, and iOS. However, only Nord offers support for Linux, while Norton can’t be installed manually using a third party OpenVPN client.

Norton’s apps are reasonably simplistic, with a lack of functionality seen across all operating systems. For example, its Windows app is a bare bones client that has none of the important features you would expect to see from a premium VPN.

NordVPN offers useful setup guides to get the VPN working manually on various different kinds of devices, and you can connect using a third-party OpenVPN client if you prefer. (This makes it possible to use the VPN on almost any device or platform.) It offers strong support for all apps, including important features such as a kill-switch and obfuscation.

Does the VPN offer any interesting mobile features, and how do its custom iOS and Android apps perform?

With similar functionality across all apps, Norton Secure VPN offers no advanced features, and you don't get access to a kill switch. This is a major flaw in terms of privacy, making it easier for data leaks to occur if the connection drops out unexpectedly.

Comparatively, NordVPN is more of a well-rounded service, whether you’re planning to use the VPN with Android, or iOS. For example, the NordVPN iOS kill switch is enabled by default, and can’t be switched off.

VPN speeds will be important for the majority of online tasks, such as torrenting, streaming in HD, and making video calls. How did NordVPN and Norton Secure VPN perform during testing?

No matter the time, or the server selected, you’re likely to see slightly slower speeds with Norton when compared to NordVPN. It’s to be expected given the results seen elsewhere, although both providers fared well overall. Norton should be more than fast enough for whatever you have in mind, even if multiple people are sharing your connection.

Norton Secure VPN offers either the OpenVPN or L2TP/IPSec protocols depending on the app in use. Among many others, NordVPN offers its own super-fast encryption protocol, known as NordLynx. The proprietary software is an adaptation of the WireGuard protocol which allows for secure and private connections, while ensuring improved speeds.

Security should always be one of the more important factors when selecting a VPN service. Which features are on offer, and does the provider take care of the user’s personal data satisfactorily?

As you can see from the table above, there’s a clear difference in terms of everything from the protocols on offer, to basics like DNS and WebRTC leak protection. (Remember, Norton users are unable to choose their protocol, and are stuck with IPsec on iOS devices and OpenVPN on the others.)

Neither provider offers the outdated PPTP protocol, which is fast, but is prone to various security issues.

Nord also offers obfuscation (VPN cloaking), with servers that are designed to bypass VPN-detection systems. If additional security is your main aim, we’d stick with NordVPN for peace of mind.

Where a VPN is based matters, especially in terms of any jurisdictional obligations from the local government. For example, if a VPN is headquartered in the United States, it will be subject to the strict data laws from that region.

A no-logs policy will ensure that a provider has no data to hand over, whether it be usage logs, or potentially invasive connection logs. A strong policy will also ensure that the VPN won’t hand over your data to third-party marketers, or use it to create an additional revenue stream.

Take NordVPN. It has an audited no-logs policy, and is based in Panama, which is free of any mandatory data retention directives. Its logging policy has also been independently audited by the respected PricewaterhouseCoopers (PWC) AG.

Norton is currently owned by Broadcom, which is based in the USA. Any data on its servers could potentially be accessed by the US government because of FISA and the Patriot Act. Its VPN-specific privacy policy states that IP addresses will be anonymized, but it’s still fairly ambiguous. You’ll also need to make a Norton account before you subscribe to the VPN, while agreeing to a global privacy policy.

Customer service is always important, especially if you happen to run into any issues with a provider This is one area in which Norton Secure VPN excels on paper, as you’ll be able to get in contact via 24/7 live chat, as well as via phone if you’d prefer.

However, it relies on the existing Norton support infrastructure, and that does mean that some agents will be unable to answer basic questions relating specifically to the VPN. (You will be able to find a number of VPN guides (including video guides) on the main Norton website.)

NordVPN offers 24/7 live chat support, and you’ll be able to submit a ticket for more technical problems if you’d prefer. As a more specialized VPN, its support system tends to be a bit more robust, including the number of guides and articles that can be found on its website.

Both Norton Secure VPN and NordVPN have a money-back guarantee, coming in at 60 days and 30 days respectively. We’d probably hand this one to Norton, as it gives the user two months to test out the service.

Norton is a decent option if it’s packaged with other software, but it can’t hold up when compared to one of the better premium providers on the market in the form of NordVPN. Whether it’s streaming, server locations, or security, there’s a clear winner in most respects.

Despite a few positives, Norton Secure VPN isn’t as well rounded as other VPNs on the market, lacking key features you’d expect to find with a VPN in this price range. For example, a kill switch is a must, while it’s one of the few providers that doesn’t allow for torrenting.

If you are considering other VPNs, check out our other comparison pages to see how Nord fares against different providers.