This Hong Kong-based service bills itself as “possibly the easiest to use VPN on the planet.” And certainly, in this PandaPow WiFi review, I find it difficult to argue with this claim. Range issues aside, the PandaPow router is very easy to use.

The problem, however, was apparent the second this admittedly quite smart-looking bit of kit dropped through my letterbox. Processing VPN encryption is a very processor and memory intensive task. In order to do it without seriously damaging your internet speeds, you need beefy hardware.

And the PandaPow WiFi, with its sleekly diminutive looks, simply does not pack that kind of grunt. The result is extremely poor internet performance.

The PandaPow WiFi is a portable VPN router. It costs $99 per year, and comes with an extra three months' subscription for free. In other words, you pay for the subscription and get the router for free. This works out at $6.60 per month for the first year, and $8.25 per month thereafter. 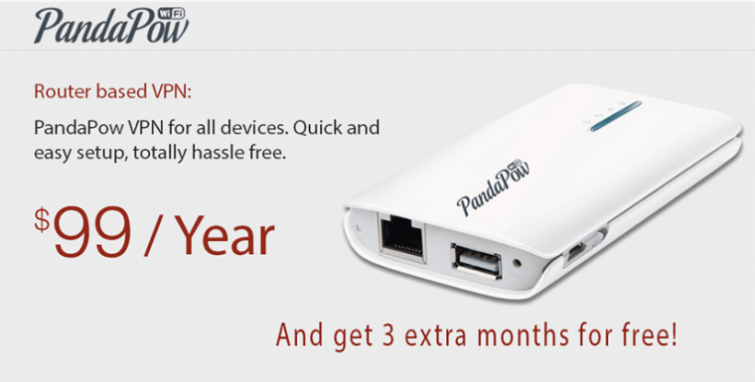 PandaPow also offers a "Classic" software-based VPN plan. Please check out our for more details. It is worth mentioning here, however, because a PandaPow WiFi plus PandaPow Classic combo package is available for $149 per year (with three months extra for free).

On its own, PandaPow Classic prices start at $9 per month, dropping to $7 per month if an annual subscription is purchased.

According to its website, PandaPow operates servers in 11 countries. However, only nine of these are currently available via the router interface (France, Germany, Hong Kong, Japan, the Netherlands, Singapore, Sweden, the UK and the USA). Features include: 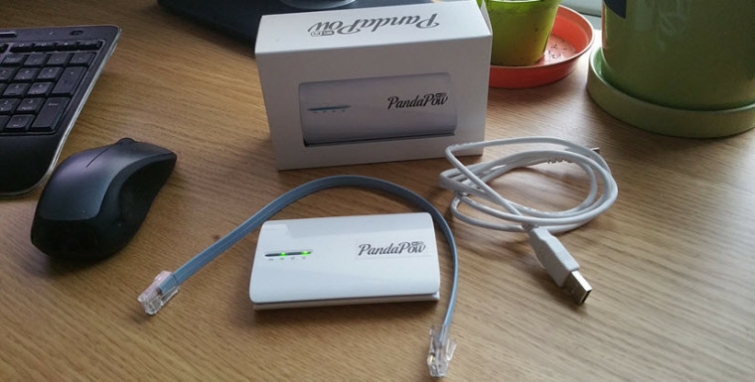 You can, of course, connect as many devices to the router at once as you wish. As with all VPN routers, these can be devices that cannot usually be configured for VPN, such as smart TVs and games consoles.

The PandaPow WiFi router is a compact, portable VPN router. You connect your devices to it via WiFi, and it connects to the internet over wired LAN (plug it into your router), WiFi, or USB modem. The specs I have been provided with are:

These specs are notably lower than those of, for example, the Betterspot VPN Router. As we shall see, this shows. 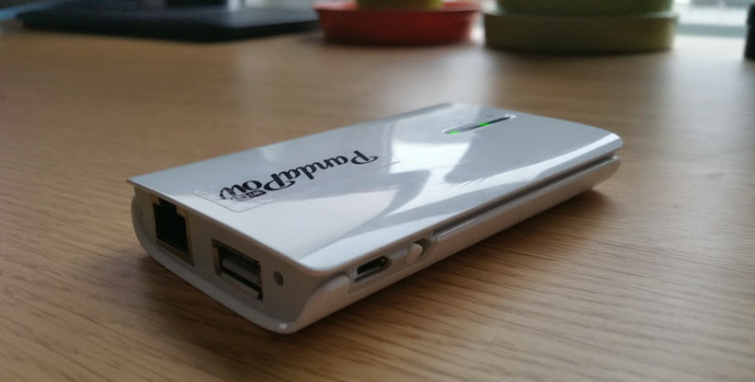 Unlike similar VPN routers I have reviewed, the PandaPow WiFi packs a USB-rechargeable battery. This is a great feature, and helps to make the PandaPow truly portable. I am afraid, however, that I did not have the patience to properly test how long the battery lasts between charges.

As long as you are a fan of white hardware (I must admit that I am not), the PandaPow WiFi router looks great. Its styling is sleek, and the device is compact enough to slip into even the slimmest jeans pocket. 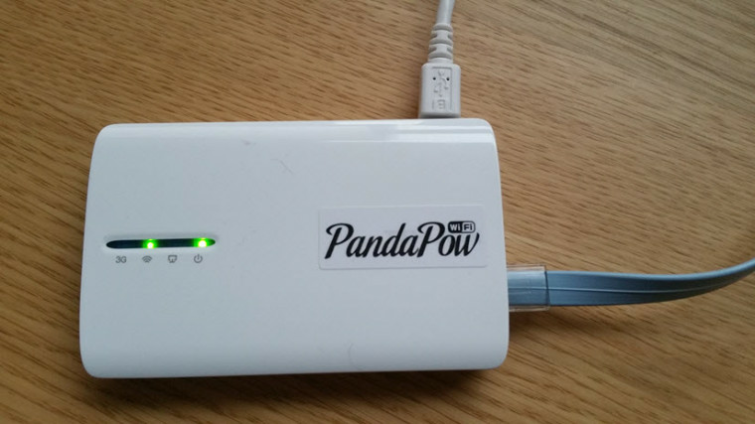 The plastic casing feels a little cheap, but is robust. This is a router that should easily handle the knocks and scrapes associated with being carried around on a daily basis.

PandaPow is based in Hong Kong, which has no mandatory data retention laws. According to its privacy policy, no usage logs are kept:

“We do not under any circumstance store any private information about our user activities on our network, such as emails, chats, VOIP calls, websites visited, etc.”

It does, however, keep various connection (metadata) logs:

“In addition to any personal information you provide us, we may store the following pieces of data: IP address, times when connected to our service, the total amount of data transferred, and transfer speed information.”

On the plus side, the NSA and its ilk have no jurisdiction in Hong Kong. Regarding P2P and copyright, PandaPow has this to say:

“If we receive complaints regarding copyrighted materials such as music and movies being shared over our network, we may be forced to take some measures to prevent legal actions towards our service. Such measures include filtering traffic in order to determine what account is misusing our service, and to cancel that specific account.”

PandaPow uses "our SSL-based VPN protocol, in all our apps and our router. It's designed specifically to avoid detection and blocking that otherwise breaks standard VPN protocols."

When I asked PandaPow if this meant that it uses OpenVPN, I was told (eventually), that no, "it's a proprietary VPN protocol."

A quick look at the configuration files for its Classic plan software, however, clearly shows that PandaPow does in fact use regular OpenVPN. The Windows client is a custom build of OpenVPN 2.3.11.

I also asked for further details regarding the "avoid detection" bit. I was told that,

"We don't want to describe in detail what may be used against us, by those who want to block our VPN. Let's just say our VPN service has been successful for years in places where many of our competitors are having problems getting blocked."

I could be wrong, but my guess is that OpenVPN connections are simply routed over TCP Port 443.

PandaPow says that perfect forward secrecy (PFS) is implemented. This would not be surprising, as PFS has been implemented in the latest official OpenVPN 2.4.0 update. But the PandaPow Windows software client is based on OpenVPN 2.3.11, and no Diffie-Hellman or ECDH keys are specified in the config files. This suggests that PFS is, in fact, not used.

This configuration should be fine for more casual use. But it falls below our minimum recommendation for a “secure” VPN connection that should be resistant against any known form of attack for the foreseeable future. PandaPow tells me that,

"We are in process of adding options for even stronger encryption, e.g. AES-256."

The PandaPow website lacks visual polish, but is easy enough to navigate. An FAQ is available, but this is very much aimed at VPN newbies. A blog keeps readers updated with the latest developments at PandaPow.

Support is by ticketed email or live chat. It might be because my time zone in the UK is very different to that of Hong Kong, but live chat was never available when I visited the website. Phone support is available during Hong Kong business hours (GMT+8). Regular international call charges apply.

I sent some questions by email, and received an only partial response two days later. When I asked for clarification and additional details, PandaPow took a full two weeks to respond. Now, I know this all happened over the holiday period, but I was still rather surprised by this very long delay. Especially as the company was aware that I reviewing its product!

As discussed under encryption above, when I did receive answers, these were either partial, evasive, or factually incorrect. Whether this is due to ignorance or a deliberate attempt to deceive, I have no idea.

Signing up is easy enough. Payment is via credit or debit card, PayPal, Alipay, UnionPay, or TenPay. Payments are auto-recurring until canceled.

It is also possible to pay using bitcoins (via Coinbase), but this would fairly pointless for privacy, as a physical address is required for the router to be delivered.

As with most VPN routers, the PandaPow WiFi is managed via a web interface. Simply log on to the specified webpage in your browser, and use the password provided. 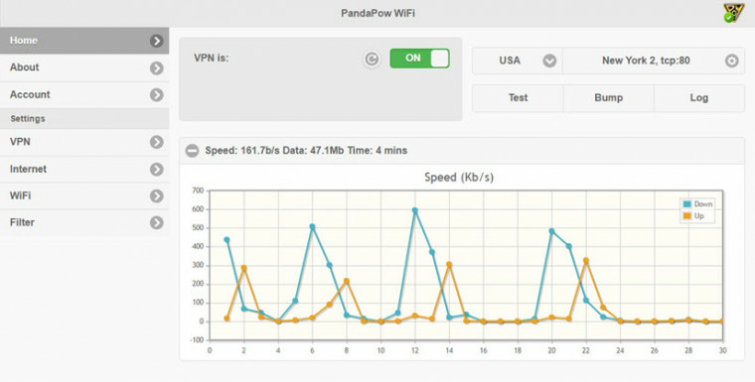 The web interface is attractive and easy to understand. 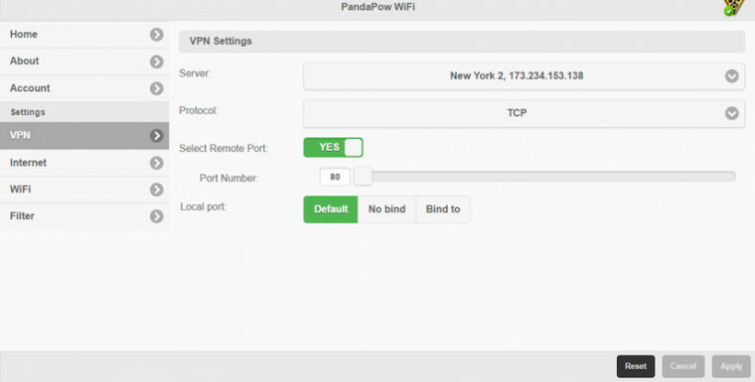 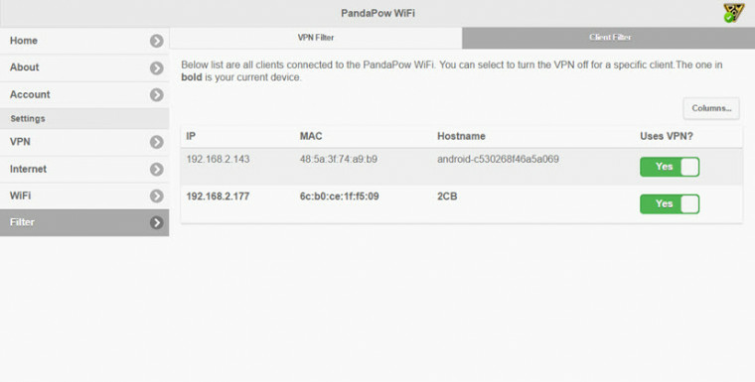 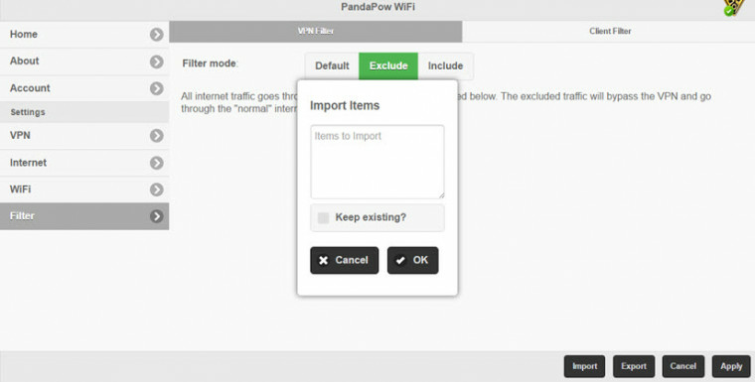 The PandaPow lives up to its boast that it is very easy to use. It also supports some very useful features. The most useful of which (to my mind at least) is its filtering capabilities.

It is worth noting here that range was a big issue with the PandaPow. It was only when placed around halfway between my PC and my modem/router (which provides an excellent connection) that I got a connection to the PandaPow that was stable enough to run these tests.

Even then, the connection was often very flaky.

All tests were performed using my UK 50 Mbps/3 Mbps fiber connection. My modem/router is a Virgin SuperHub 2ac (2.4ghz/5Ghz 802.11ac), and I performed the control test using the 5Ghz band. 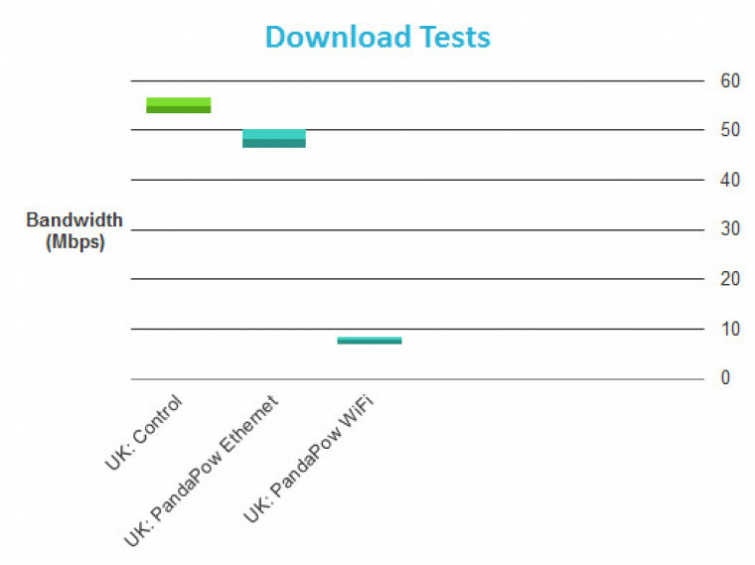 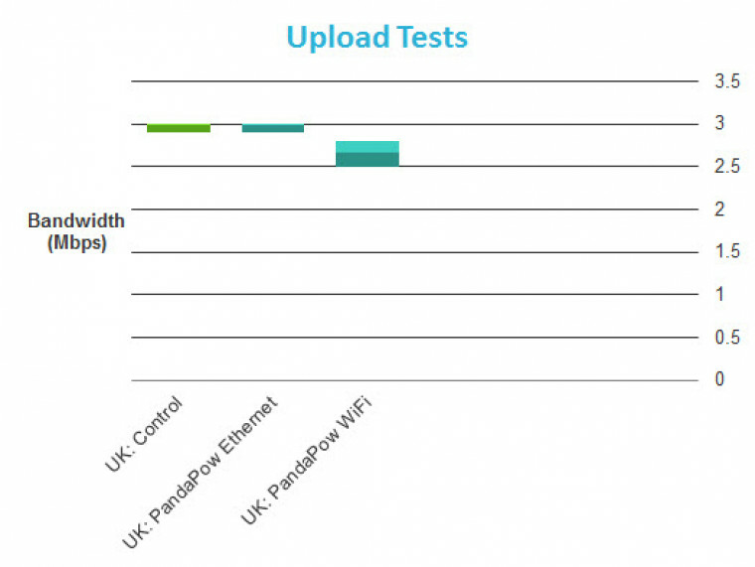 The graphs show the highest, lowest and average speeds for each test.

I also tested local network WiFi performance using the WiFi Speed Test app for Android. Tests were performed with my phone placed next to the router being tested. 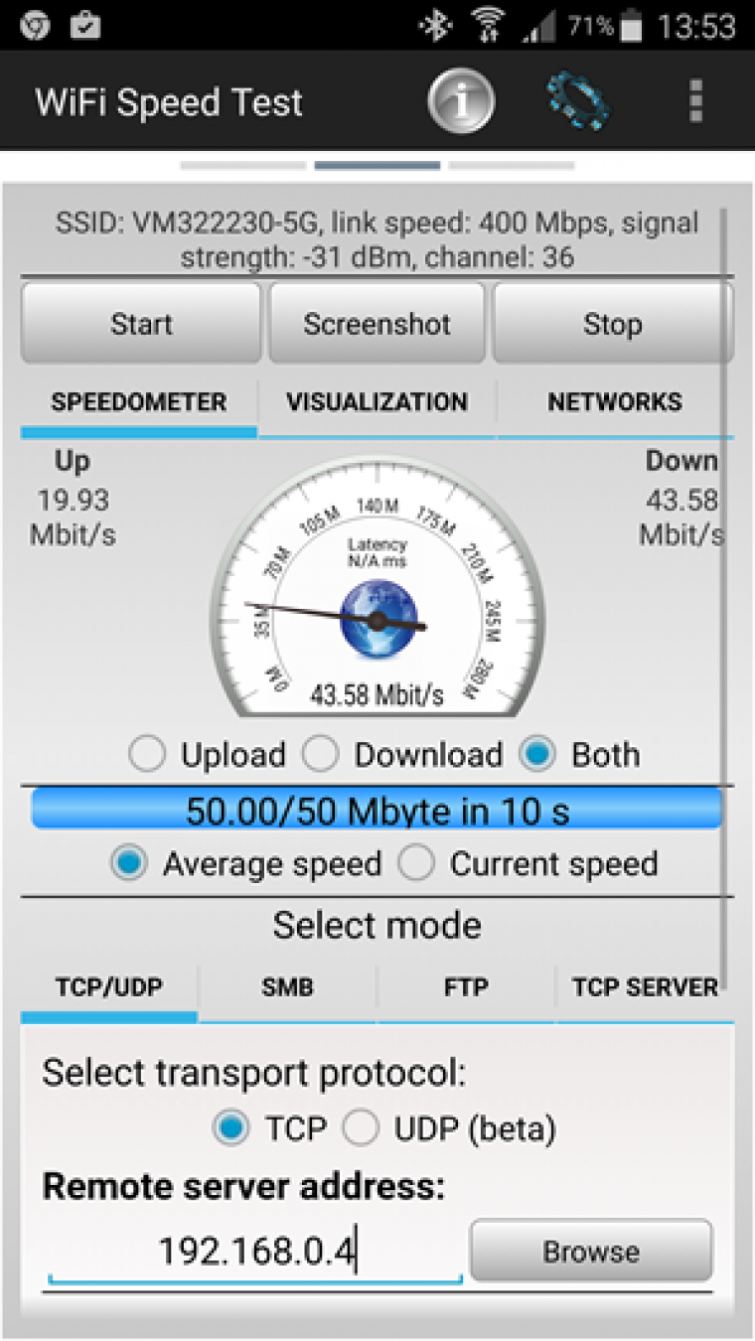 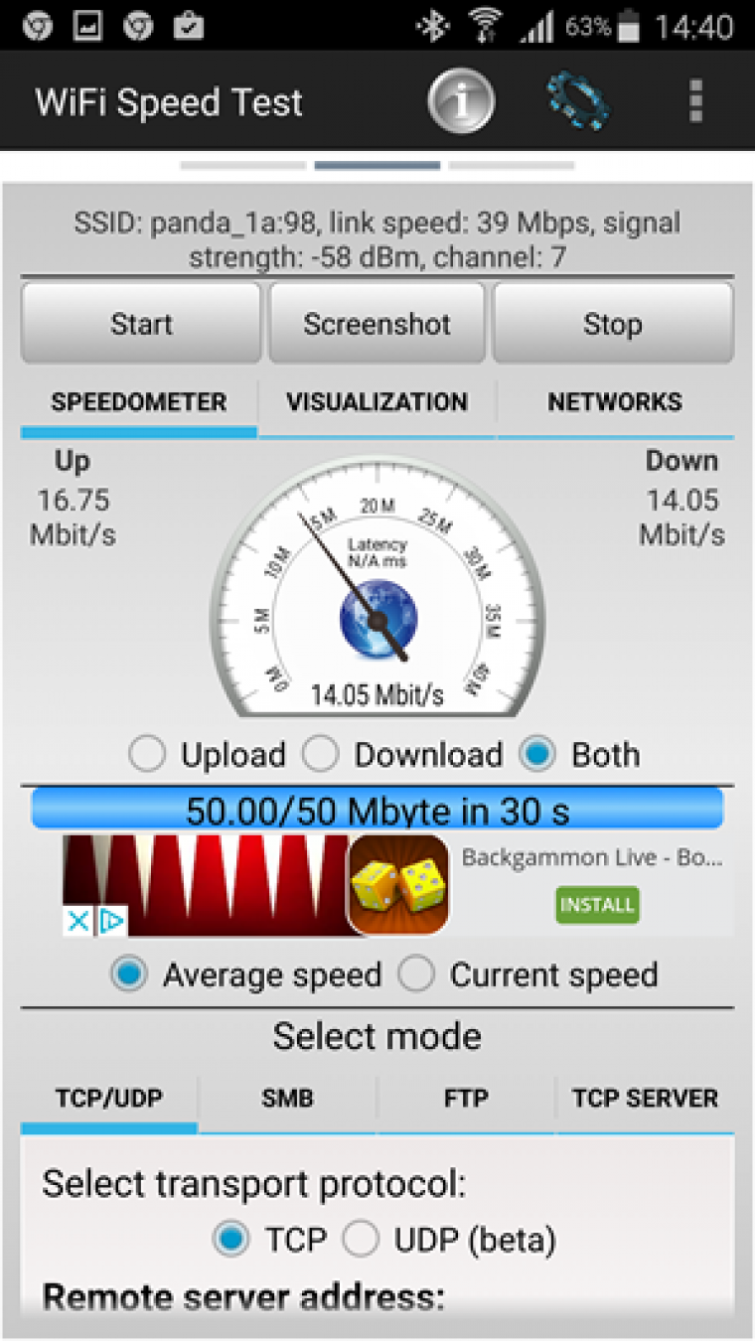 Even though there was only half the distance between my PC and the PandaPow than between my PC and my router/modem, the PandPow was considerably slower. That said, PandaPow is to be commended for including WiFi functionality at all. This requires two WiFi chips, and is a feature not always found in similar products.

Expect to see around 85-90% download speed loss when using a VPN on the PandaPow router. This is not good, but doesn't come as a surprise given the clearly very limited capabilities of its hardware.

I detected no IPv4 or WebRTC leaks (the local IP shown above under WRTC detection does not reveal your outfacing IP address, and so does not constitute an IP leak). Unfortunately my ISP (Virgin Media) does not support IPv6 connections, so I was unable to test for IPv6 leaks.

I was pleased to see that neither US Netflix nor BBC iPlayer was blocked when connected to a PandaPow server in the correct country. Given the above speed results, though, you may struggle to stream content from these services without major buffering issues.

Any WiFi-capable device can connect to the PandaPow WiFi router. It is probably worth also mentioning that the PandaPow software (“Classic”) plan has desktop clients for Windows and MacOS/OS X, and mobile apps for Android and OS X (9+).

Given its tiny size, it was always clear the PandaPow was never going to be an internet speed demon. Even by the standards of similar devices, however, its performance is very poor. It also has the worst WiFi performance I have yet encountered, in terms of both speed and range.

The PandaPow WiFi is clearly not suitable for day-to-day use. After all, how many people are willing to sacrifice 90% or so of their internet speed? Its ease of use and rechargeable battery could give it some utility as a secure travel router. However, this utility is badly undermined by its limited range, which will make connecting to many public WiFi hotspots an impractical proposition at best.