With the 2022 Winter Olympics fast approaching, you're probably looking to gather all the details ahead of time, so you can just sit back and enjoy the show when the day arrives.

The Opening Ceremony will take place on Friday, February 4, in Beijing, and the competition will air until February 20 on several major sports channels. NBC and the BBC, will be covering all the events LIVE.

If you haven't had any luck accessing this streaming site from your country, don't worry! By using a VPN, you can get unlimited access to your favorite winter sports event this Olympics season.

How do you unblock the 2022 Winter Olympics with a VPN?

As popular as the Winter Olympics are, they may not be available live in every corner of the world. There are only a handful of channels offering continuous live coverage of the event, and they may not be available in your country. Other alternatives may involve an expensive subscription or only air highlights. Things can get even more complicated if you're traveling and already subscribed to a sports service that is unavailable in the country you're heading to.

Luckily, all this can be fixed with a VPN. The best part is this doesn't have to cost you a fortune, and you'll be set up in just a couple of minutes. Here's how you can unblock the 2022 Winter Olympics with a VPN in four easy steps:

Where to watch the 2022 Winter Olympics?

This year's Winter Olympics will officially start on Friday, February 4, at 6:30 AM eastern time (ET), with the opening ceremony streaming live on several platforms including BBC iPlayer, NBC and the Peacock app. Other local channels across the world will also stream highlights of the show.

The BBC will be showing more than 300 hours of Winter Olympic coverage.

You can stream BBC iPlayer for free, all you need is a BBC account. For this, you will need a UK postcode which you can find online, a valid email address, and to agree that you have a TV license.

The BBC will be broadcasting multiple different events and you can also stream BBC One and BBC Two live from the iPlayer website. If you miss the opening ceremony or some selected events you will be able to catch up after they have been broadcast.

We recommend that you take advantage of ExpressVPN's 30-day money-back guarantee to stream iPlayer. Pairing this with BBC iPlayer will allow you to stream the Winter Olympics for free!

If you live outside the UK then check out our BBC iPlayer VPN guide for more information about unblocking the British streaming service.

However, even if you live outside the US, you can still catch the live show on Peacock by using any one of our best VPNs for peacock TV. A Peacock subscription is only $5 a month if you opt for an ad-supported subscription, or $10 a month for ad-free. You'll get full access to over 2,800 hours of the 2022 Winter Olympics with either of these tiers.

Some of the events like curling, luge freestyle skiing, and ice hockey will begin ahead of the opening ceremony – curling and luge will be the first to start on February 2. NBC channels will stream these early events the night before the opening, February 3. The Olympics closing ceremony is on February 20 – and NBC and Peacock will share this spectacular event with us live once again.

Other ways to stream the Winter Olympics

Here are a handful of other international services that'll be streaming this year's Winter Olympics (not live):

Why use a VPN to Watch The 2022 Winter Olympics?

This year, NBCUniversal presents all its fans and customers with record coverage of the Winter Olympics – over 2,800 total hours of entertainment shown across NBC, Peacock, USA Network, and CNBC. Some of these channels will even show Olympic events for free, however, they are all geo-restricted. This means you won't be able to watch them if you're living (or currently staying) outside the US.

How do streaming services block users by location?

iPlayer, Peacock.com, and other websites can see your approximate geographical location by inspecting your IP address – a unique numerical code that your internet provider assigns to each of its users. For example, since Peacock is only licensed to stream its content in the US, it will automatically block anyone whose IP address is based in another country. The same will happen to anyone trying to access Channel 7 from outside Australia or anyone visiting the Eurosport online service from outside Europe and the UK.

With a VPN, you can unblock the Olympics from any part of the world

However, by connecting to a VPN, your traffic will be routed through a private server, so it will appear that you are in the country the streaming service you're trying to unblock is located in (regardless of your actual geographical location). Your IP address, too, will show up as the one provided by the VPN server rather than your actual IP address. So now, if you try streaming the 2022 Winter Olympics live, there will be nothing to stop you, as Peacock TV or iPlayer's geo-restricting mechanisms will think you're in the USA or UK respectively. This geo-hopping method works with streaming platforms other than these – as long as you subscribe to a top VPN service and connect to a server in the country you need to unblock.

This year, the International Olympic Committee has confirmed that only a limited number of spectators will be attending live events due to the ongoing pandemic. Tickets will not be made available to the public, and nobody from outside China will be allowed to attend the games.

Still, this doesn't mean you have to miss any of the 15 most popular winter sports, or any of the 7 brand-new ones. Here's the schedule of the most popular Winter Olympic sports by the official Olympic website: 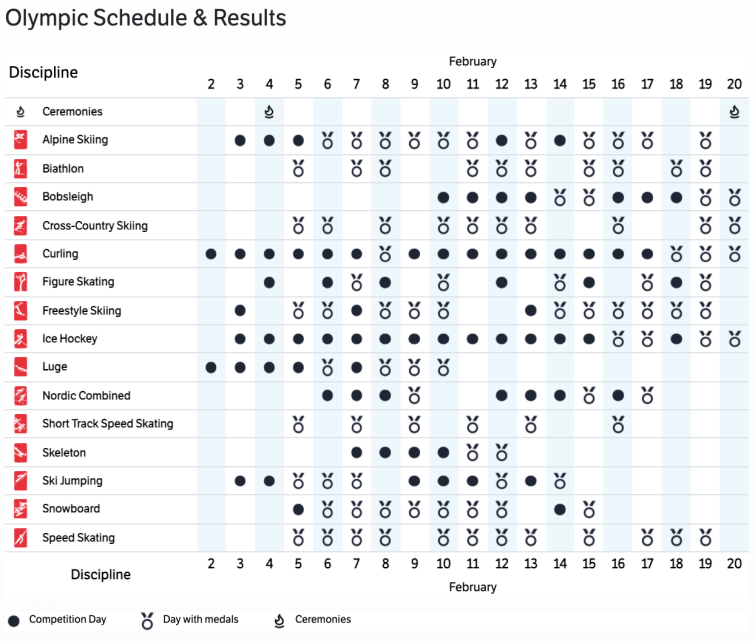 These elegant maneuvers on ice will begin on February 3, at 8:55 PM ET, followed by:

The preliminary rounds of women's ice hockey kick off on February 2, at 11:10 PM, followed by:

You can watch women's individual medals on February 5, at 5:35 AM, as well as:

Finals for this year's brand new event, the women's monobob, are on February 13 at 9 PM. Next are:

More about this year's Winter Olympics

The biggest international winter sports show of 2022 will be held in three different locations – Beijing, Yanqing, and Zhangjiakou. China's capital, Beijing, will host the opening ceremony and closing ceremony, all the ice sports, and four of the snow events (snowboard and big air freestyle skiing – men's and women's).

The rest of the events will be divided between:

This Winter Olympics will see the highest ever percentage of female athletes competing for medals – 45%, up from the previous record of 41% at the Olympics in Pyeongchang. Beijing's Olympics mascot is Bing Dwen Dwen, a wide-eyed panda wearing a suit of ice with red hearts in the central part of his paws – symbolizing purity, strength, and hospitality.