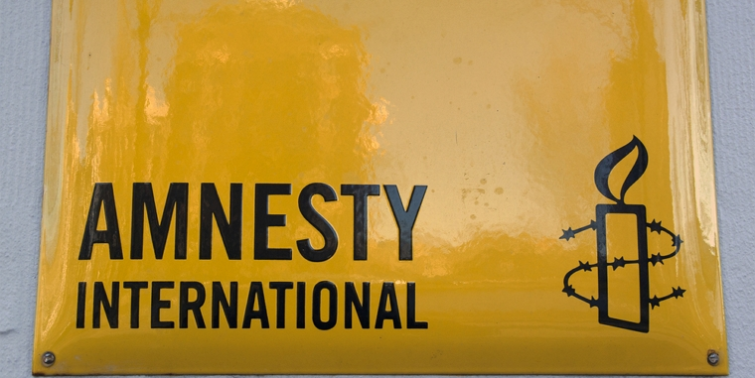 Amnesty International held a worldwide day of protest outside Google offices around the globe yesterday. The protests, a provocative statement against Google’s plan to re-enter the Chinese market, struck the search giant's offices in the US, UK, Australia, Canada, Germany, Hong Kong, the Netherlands, and Spain.

Code-named Project Dragonfly, Google’s censored search engine is currently in development and once launched will reportedly conform to China’s authoritarian internet censorship and surveillance practices. Human rights groups, privacy advocates, politicians, and many Google employees have been vigorously outspoken against the plans since reports of its clandestine development first emerged in August. The search engine will automatically filter out websites blocked by China’s Great Firewall. Additionally, it will blacklist results for certain search queries such as “human rights”, “student protest”, and “Nobel Prize” according to a September report from The Intercept. Not only that, but the search engine is allegedly also designed to link Chinese citizens’ search histories with their mobile phone numbers, allowing Chinese authorities to better exert control.

Google CEO Sundar Pichai has defended the project, claiming at a Google employee meeting that its mission is to "organize the world’s information” according to a report from Bloomberg. Pichai indicates that this mission obliges Google to provide information to everyone. The report also states that Pichai told employees that the project is still in its “exploratory” stages, adding that since Google has a “positive impact when we engage around the world” there would be no reason to believe that the impact would be anything less than positive in China as well.

With the protests at Google offices around the world, Amnesty International hopes to raise global attention to what it deemed “an alarming capitulation by Google on human rights” in an open letter to Pichai in August.

In a statement yesterday Amnesty International added that “Google’s plans to launch a censored search app in China could irreparably damage internet users’ trust in the tech company.” Concluding that “going ahead with the app would set a dangerous precedent for tech companies enabling rights abuses by governments.”

Joe Westby, Researcher on Technology and Human Rights at Amnesty International, stated that “This is a watershed moment for Google. As the world’s number one search engine, it should be fighting for an internet where information is freely accessible to everyone, not backing the Chinese government’s dystopian alternative”. Westby added,“Many of Google’s own staff have spoken out against these plans, unwilling to play a role in the Chinese government’s manipulation of information and persecution of dissidents. Their courageous and principled stance puts Google’s leadership to shame. Today we are standing with Google staff and asking them to join us in calling on Sundar Pichai to drop Project Dragonfly and reaffirm Google’s commitment to human rights.”

Amnesty International has created an online petition for people to sign as a statement of objection against Project Dragonfly. The petition claims that by going ahead with the project, Google is breaking its promise not to support the Chinese government’s mass censorship and surveillance, made when Google originally pulled out of the Chinese market in 2010. Indeed, this move seems to go directly against Google’s supposed championing of a free and open internet. Project Dragonfly is manifestly a business decision by Google in an effort to re-enter and capitalize on the massive Chinese market. Amnesty International’s petition expressly calls the move out as trading “human rights for profit in China.” Ultimately, the petition demands two things from Pichai: “Drop the Dragonfly programme and publicly commit not to re-launch a search engine in China at the expense of human rights” and “Guarantee protections for whistle-blowers and other employees speaking out”.

In line with the protests and petition, Amnesty International released a tongue-in-cheek satirical Project Dragonfly recruitment video roasting Google for playing along with China’s censorship, surveillance, and human rights abuses.

Given that the Chinese government’s internet censorship and surveillance practices have certainly become more and more heavy-handed in recent years, and Google’s past reasoning for its 2010 pullout, the plan to reintroduce a censored search engine is raising eyebrows for many who are aware of Project Dragonfly. With yesterday's protests, Amnesty International is making a global push to spread awareness of Google’s not-so-secret-anymore plan, to as many people as possible. It is the human rights group’s hope that the awareness and action of the public will help sway Google executives to reconsider their plan and ultimately back out of the project completely.

Time will tell if yesterday's protests will yield the group’s desired results, but for now, Amnesty International is going in hard in its effort to spread awareness and to put pressure on Pichai and Google to abandon Project Dragonfly for good.