With some very rare exceptions, using a VPN will have a negative impact on your internet speed. After all, your data has to travel further as it gets routed via the VPN server, which also has to process the encryption and decryption needs of potentially hundreds of other VPN users.

This performance loss is often measured in terms of how the VPN impacts download and upload speeds, but there is also another factor in play: ping.

Properly speaking, Ping is a software utility which is used to measure ping rates. In common use, the term ping often refers directly to the ping rates themselves, so to avoid confusion we always capitalize the Ping utility and refer to ping rates in the lowercase in this article.

The Ping utility is available on almost all platforms and measures the round-trip time it takes for a packet of data to reach a server from your computer and then bounce back again to your computer.

In addition to raw ping rates (the minimum, maximum, and average round-trip times), it reports details such as errors, packet loss, and standard deviation from the mean.

Of these figures, the average ping rate (round-trip time) in milliseconds (ms) is probably the most useful to most people.

The ping rate is sometimes also called latency, and the terms are synonymous. And just to be clear, the lower the ping rate (latency), the faster server’s response time is. So low ping rates are good.

Why is ping a problem when using a VPN?

Low ping rates can reduce web page load times, but in most situations, you are unlikely to notice the difference from using a VPN unless the VPN server is on the other side of the planet to you.

A notable exception to this, however, is when using a VPN for online gaming. In order to react with lightning fast precision in games where the person with the fastest reflexes is king, gamers require high ping rates.

For these people, a delay of just milliseconds between pressing their mouse button and the action being performed on-screen can be a matter of victory or death.

Note that ping rates affect response time, and therefore have little effect on streaming with a VPN, where bandwidth (as reflected by download speeds) is a much more important factor.

How to test ping

How to test VPN ping 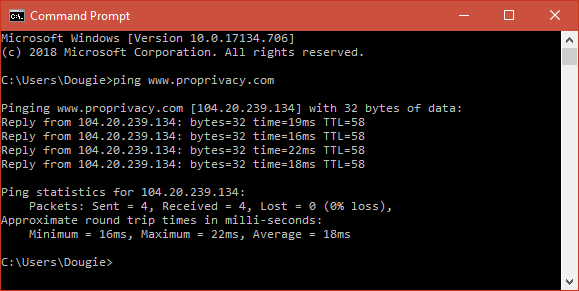 Ping results with no VPN (from the UK). Average latency = 18ms.

Ping results when connected to a VPN server in the Netherlands. Average latency = 29ms.

Ping results when connected to a VPN server in the United States. Average latency = 110ms. As we can see, distance makes a big difference!

If you are a gamer, you should check ping times when connected to your favorite games server(s).

How to reduce ping