ProPrivacy is reader supported and sometimes receives a commission when you make purchases using links on this site.
Written by Peter Selmeczy

We recently did a 'Custom Router Firmware Overview' but weren't able to go beyond the surface as we didn't have a router that would be able to run all the types of firmware. We have now been lucky enough to get our hands on the popular Asus RT-N66U courtesy of our friends Sabai Technology.

The main reason that people install custom firmware on their routers is that it provides extra services that aren't available on the stock configuration or because they wish to optimize one specific area of operation. Here is a very quick glance at the types of firmware we're going to be looking at. If you are interested only in a basic comparison, then you can also view the article mentioned at the beginning of this post.

The installation will vary from router to router but the process is generally the same and requires you to first clear the NVRAM memory and then use the upgrade option (using the firmware's GUI) to load your desired new/upgrade firmware. With the N66U, the processes are similar however since it is a fairly advanced model it has a special reset menu making the process independent of the firmware you are installing and thereby making each as easy as the other. We would however recommend Googling the process for your router before you begin as it can vary to some extent. The time required to carry out the firmware installation is 15 minutes but we recommend setting aside at least an hour as you will need to find the firmware and at least set the basic settings after installation.

As the table below shows the firmware can vary greatly in size. We must note that both DD-WRT and Tomato come in sizes as small as 2MB so it can be installed on older/ less powerful routers. The firmware size can be important as the more space it takes up the less space you have to install additional code and add-ons to your router. Fully using up space on your router can also limit its speed. Therefore, it's good to see that all the custom firmware are considerably smaller compared to the stock firmware even though they have more functionality.

With all par the stock firmware it is possible to use PuTTy (or similar) to install add-ons to your router. We gave this a test by installing Transmission (a torrent client) on all three of the firmwares. It was easy to do on all of them however for Sabai you have to change the router IP address to 192.168.1.1 for it to work (or the transmission config files but this is slightly harder). The guides we used were here for DD-WRT and here for Tomato/Sabai.

If you plan on playing around a lot with your router, then it is highly recommended that you learn some basic Linux commands as this will help you understand what is going on exactly.

Theoretically, all the firmware is free however it is possible to buy pre-flashed routers in case you don't have a router you wish to use. The prices displayed here are specific to the Asus RT-N66U but they fair similarly for different routers.

Admittedly, both FlashRouters and Sabai are slightly expensive with comparison to the stock but with Sabai this price includes extensive support and guarantees which is a great justification for the price.

Each firmware has a different look, feel and navigation and we will have a look at these below.

Though not really a deciding factor the aesthetic of a firmware help give an idea of what you can expect from the software. In the table below you can see screenshots of the homepage of each firmware. We can make a few deductions from these images. The Asus firmware, with its clear diagrams and straightforward menu options, clearly indicates that it is aimed at the everyday user. The same can be said for Sabai however once in their advanced settings you get an interface very similar to DD-WRT/ Tomato that, though it can be a bit mind-boggling, clearly shows how much more the router can be utilized.

The above images also show the root menus of the navigation tree and will help you achieve your desired set-ups. These menu options also help give some indication to how much can be achieved with your router. As mentioned, the Asus stock firmware is aimed at the everyday person so it is very straightforward.

We prefer the DD-WRT navigation the most since it seems to make the most sense, and it is easy to find any settings/ commands that you might not know where it is located. We also like the fact that it is horizontal and the tab system makes it easier to see through the options.

The Sabai and Tomato are essentially the same once you open the Advanced options in Sabai par VPN which is prioritized for it.  Though they have a slightly odd layout it isn't overly complicated and just needs some getting used to.

We have a 30.0/3.0Mbps internet connection all of which we are able to utilize, independent of firmware, when our PC is wired to the router which in turn is connected to the modem. To test the WiFi Speeds we imagined and average household and placed the router approximately 10 meters from the computer on the other side of a thick concrete wall. We maintained all antenna locations the same for the tests and instead used software tweaks to see how much we could improve the connection speeds.

As we can see from the below speeds, all the firmwares could retain most of the speed with the stock firmware marginally lagging behind and Tomato having the best performance. Also, as expected the speeds on the 5GHz channel were faster but of course, this has a lower range.

Though the results were pretty great already we tried to see if we could squeeze a bit more out of the system. We did this in the ways described in the below table as well as the improvements we were able to achieve. It's important that you use some kind of WiFi Analyzer (there are plenty out there we recommend this for Android and the firmwares have some built-in too).
Two important notes for improving performance independent of the firmware you are using:
1. Always keep 5GHz and 2.4GHz channels separate by using different SSIDs
2. Use the least congested channels and use dedicated n or a/c channel setting if all your devices support this

We concentrated on getting the best internet throughput, however, if you are also concerned about the internal throughput when using a NAS, then you can use a tool like LAN Speed Test (Lite). Some of the settings we have used can make your router unstable and lower its lifespan so only make changes if you know what you are doing.

As ever, here at ProPrivacy the most important factor for us is the use of a VPN. Since the router we are using is very advanced the stock firmware does support both OpenVPN and PPTP clients but for most routers, this is not the case and that's where a large advantage of custom firmwares come in.

We do not recommend using PPTP as it is full of security flaws and therefore we only considered OpenVPN in our testing.

We used VyprVPN for our tests because it provides some of the fastest speeds on the market but if you haven't got a VPN account yet then we recommend you look around to find out what's best for you.

An advantage of VyprVPN is that it has a very simple .ovpn file which means it can be easily set up on all platforms however most companies have complex files and weren't sure how the stock firmware would handle these - we know for a fact that they work fine on the other platforms. 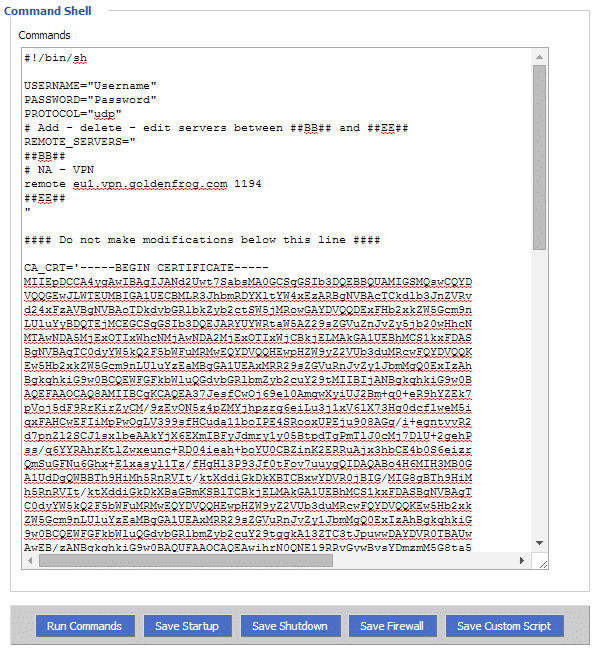 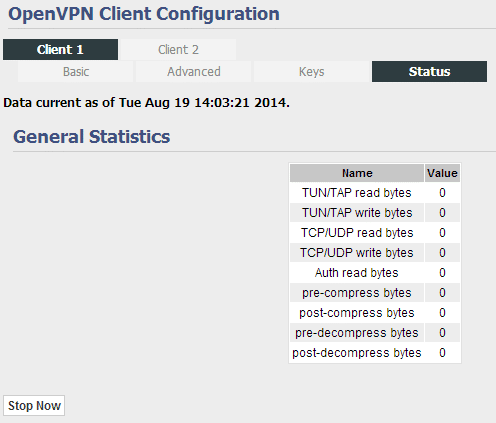 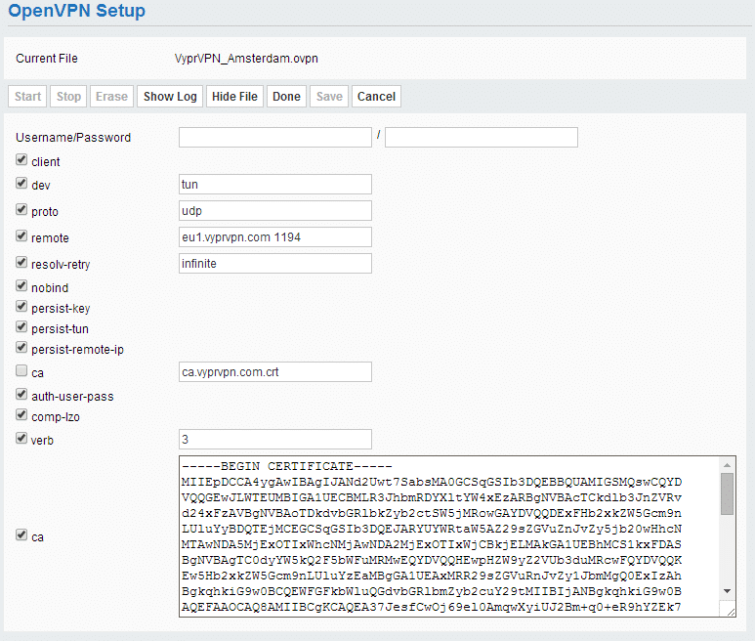 We first tested the connection using the Windows VPN software and connected to the router via Ethernet to obtain a baseline number: we achieved speeds of 28.3/2.7. Unsurprisingly, the low CPU speeds and power means that only a margin of our available internet speed is actually being utilized.

From the results, we can see that unsurprisingly the stock firmware is the slowest. This is followed in third place by DD-WRT. Interestingly for both of these firmwares the VPN speeds on the 5GHz channel were slower than on the 2.4GHz and we're not really sure why - if you do, let us know.

Since Sabai is an advanced Tomato build, it's unsurprising that their speeds were very close with Sabai being a slight bit faster.

Sabai Technology claims to have a VPN set-up and use an optimized system. This shows through the results as not only do you have an easy set-up process but also show to have the best speeds. Further to this is the special feature of Sabai called 'Gateways' which is definitely one of it's best features and we couldn't find anything similar for the others. Gateways allow you to decide which devices, that are connected to the router, are using the VPN and which aren't.

As highlighted by the community the setup, speeds and monitoring of VPN connections is not only easier on Tomato but it allows you to set-up 2 clients so you can easily change between different servers/providers that you like using. The VPN client on the Stock is clearly a bit of a gimmick and the DD-WRT lies in the middle ground.

Using custom firmware is definitely worth it especially if you have a lower-end router as it allows you to get a lot more performance and settings out of it. Stock firmwares aren't bad but they are usually they are very clogged up it's close to impossible to achieve any complex set-ups.

Personally, we have always been big fans of DD-WRT due to its ease of use and amazing community support. However, after trying Tomato for a longer period of time I can definitely see the appeal of it as you can save a lot of time by not having to do endless reboots and the improved monitoring and VPN performance you can achieve.  Choosing between Tomato and DD-WRT is really a personal choice and depends on what areas of operation you wish to optimize as well as what hardware you have available. However, if you're just using a custom firmware to slightly boost performance and enable some extra features then we would recommend DD-WRT.

Though Sabai comes at some cost in order to get the best out of it, it is definitely worth it especially if you have little experience with using and setting up custom router firmware.