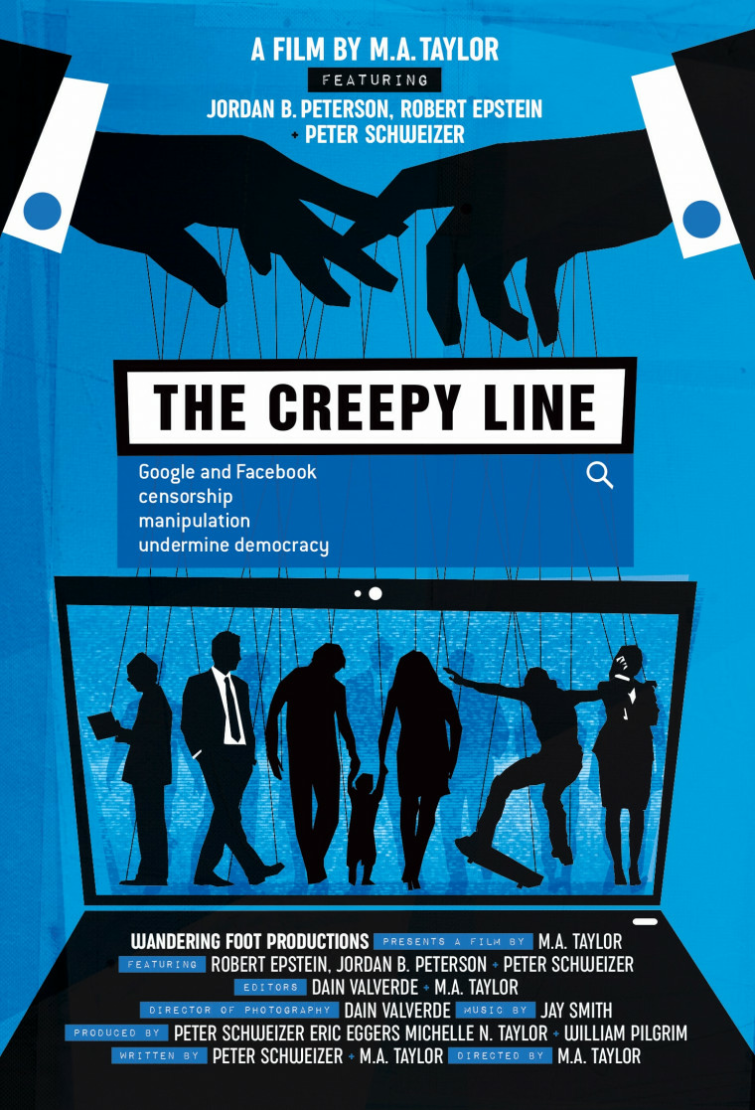 “An eye-opening documentary, The Creepy Line reveals the stunning degree to which society is manipulated by Google and Facebook and blows the lid off the remarkably subtle - hence powerful - manner in which they do it.”

The Creepy Line is a movie documentary which tries to build the case that Google and Facebook manipulate search results and trending news content with a bias against right-wing and conservative ideas, values, and politics.

As such, it plays directly into conservative American paranoia about Silicon Valley liberal elites playing god with the ubiquitous technology they serve to billions of people every hour of every day.

The Creepy Line is directed by M.A. Taylor, also known for Clinton Cash: Everything is for Sale, Hillary: The Movie, and Hype: The Obama Effect.

The film takes its name from a shockingly frank comment by then Google CEO, Eric Schmidt, in 2011, in which he said that “Google policy is to get right up to the creepy line and not cross it.”

The movie correctly analyses how Google and Facebook (which to all intents and purposes it treats as interchangeable entities throughout the film) monetize the free services they offer by tracking everything their users do online, in order to target them with highly personalized advertising.

“We are the product,” indeed. Although the point is hardly original. Similarly, the film’s point about how Google and Facebook algorithms create “filter bubbles” or echo chambers that reflect our own world-view back at us, rather than exposing us to the full range of opinions, is well made (although not for the first time).

After all, both Google and Facebook’s algorithms are designed to serve content that we like, and we like reading views that align closely with our own. Such is human nature.

Indeed, the film’s secondary theses: that Google and Facebook have way more power than any entity (corporate otherwise) should ever have, is hard to argue with. Especially when the entities are as unrepresentative and unregulated as these high tech for-profit behemoths are.

One of the many problems with the film is that it uses these uncontroversial problems with Google and Facebook, to add legitimacy to highly partisan arguments based almost entirely on speculation and anecdotal evidence.

A good example of this is how the film shifts almost imperceptibly from arguing that the algorithms Google and Facebook use are inherently biased towards the political beliefs of the people who programmed them (infer liberal elites), to outright accusation that Google and Facebook actively manipulate search results and trending content in order to push their political agenda.

This accusation forms the central thesis of the film, but the only factual evidence to support it (other than the “if they can do this they must be doing it” argument) comes from a study performed during the 2016 US Presidential election by respected psychologist Robert Epstein.

This study is undoubtedly interesting, but it very much cherry picks the facts. Other studies have demonstrated that the picture is not nearly as clear-cut.

Search results, for example, are heavily influenced by the phrasing of search terms. If a story involves money and the monetary figure is included in the search terms, then Google will return more Conservative news sources than if the figure is not included.

Another striking example of conflating real concerns with unsubstantiated speculation is the film's deceptively seamless shift from discussing how Google scans emails, tracks people through their smartphones, and spies on them through the smart devices, to making outright accusations of liberal bias.

There is no actual connection between these two subjects, yet the movie tries to sweep viewers along, using real issues to validate unrelated speculation.

One bizarre section of the film attempts to argue that fake news is not a problem, as it only reinforces  existing prejudices rather than creating new ones

This rather baffling defense of fake news is undoubtedly rooted in the well-established fact that people with right-wing political leanings are more likely to believe fake news stories. Which makes it all the more ironic that the discussion on fake news is accompanied by images of well-known Democrat supporters.

This clear partisan agenda is evident throughout the movie. Google should rightly be lambasted for its work on military AI weapons (which it has stepped back from, following high-profile resignations from its own staff), its cooperation with the Chinese government's censorship regime, and its cooperation with the NSA’s PRISM program. But aren't these are all things that conservatives approve of?

It's also interesting to note that no mention at all is made of the Cambridge Analytic scandal and foreign pro-Trump meddling on Facebook in the 2016 Presidential elections.

Also missing is any discussion on other factors that influence Google’s web page rankings. As any website operator will tell you, for example, Search Engine Optimization (SEO), which tries to “game” Google’s search algorithms, is at least as (if not more) important to page rankings than the actual content of a page.

Needless to say, the fact that Google search algorithms perpetuate racial stereotypes and prejudices is not addressed in this film.

The film itself notes that bias occurs at both ends of the political spectrum but then goes on to only provide examples of liberal bias. This clearly gives the (unfounded in fact) impression that bias is a liberal problem.

It also rather strikingly sidesteps the fact that, for all Google and Facebook's supposed political power to influence voters in a liberal direction, Donald Trump won the 2016 election (albeit with a minority vote).

A large chunk of the film focuses on the musings of “alt-right” poster-boy Jordan Peterson, who it does seem was kicked off Google for his political views. But then again, given his fast and loose relationship with facts, the move could just as well be seen as Google responsibly suppressing fake news.

A good five minutes of the film argues that Facebook should not receive legal protections under Section 230 of the Communications Decency Act because it is not a neutral platform. As the EFF explains, however, this is simply not true.

It tries to pretend otherwise, but as its pedigree might suggest, The Creepy Line is less a genuine critique on the myriad very real problems associated with Google and Facebook, and more a political tract aimed at boosting the right-wing narrative that (despite all evidence to the contrary) conservatives are the victims of a wide-ranging and all-encompassing conspiracy by the “liberal elite.”

It does this using a toxic mix of insinuation, supposition, distraction, and cherry picking of facts. What it is not is a rigorous scientific analysis of how the algorithms used by technology companies are actually influencing (and perhaps distorting) modern society. That would be a film worth watching.

If you’ve been considering tightening up your own online security, why not check out our best VPN page for some top tips and a list of the best VPNs.