Glen Greenwald is an American lawyer, journalist and author, who worked for the Guardian US, and who was one the first journalists Edward Snowden entrusted to publish his huge cache of NSA spying documents. It thanks to men like Glen Greenwald that the general public is now aware of the enormity of the NSA (and its partner agencies around the world)’s attack on just about everyone’s privacy and freedom.

Because we basically completely agree with the points Greenwald makes, and because he is himself a concise and eloquent speaker, we will here confine ourselves presenting a brief synopsis of Greenwald’s 20 minute speech, together with some of his pithier quotes. 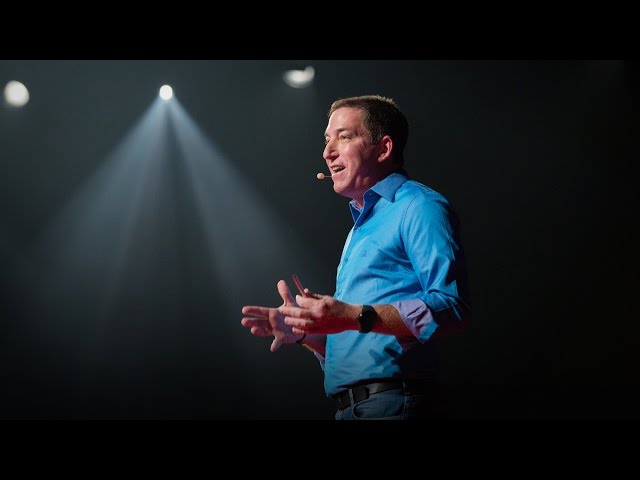 Greenwald starts by giving an example of people engaged in private activity, who their horror find their antics filmed and uploaded to YouTube, noting that it encourages a sense of,‘This is something I'm willing to do only if no one else is watching.’

He then expands on this example, using it to illustrate the dangers of mass surveillance on freedom of expression,

‘The United States and its partners, unbeknownst to the entire world, has converted the Internet, once heralded as an unprecedented tool of liberation and democratization, into an unprecedented zone of mass, indiscriminate surveillance.’

Particularly corrosive, is the notion advanced by CEO of Google, Eric Schmidt, who said, ‘If you're doing something that you don't want other people to know, maybe you shouldn't be doing it in the first place.’

‘The people who are actually saying that are engaged in a very extreme act of self-deprecation.What they're really saying is,"I have agreed to make myself such a harmless and unthreatening and uninteresting person that I actually don't fear having the government know what it is that I'm doing.’

Greenwald argues that no-one really believes that they have nothing to hide,

‘They put passwords on their email and their social media accounts,they put locks on their bed room and bathroom doors,all steps designed to prevent other people from entering what they consider their private realm and knowing what it is that they don't want other people to know.’

Noting that ‘people can very easily in words claim that they don't value their privacy, but their actions negate the authenticity of that belief’, Greenwald observes that even those who have tirelessly and evangelically to worked erode privacy for everyone else, apply different rules to themselves,

‘Last year, Mark Zuckerberg and his new wife purchased not only their own house but also all four adjacent houses in Palo Alto for a total of 30 million dollars in order to ensure that they enjoyed a zone of privacy that prevented other people from monitoring what they do in their personal lives.’

When people feel that they are watched, they are unable to behave true to their own natures,

‘Now, there's a reason why privacy is so craved universally and instinctively.It isn't just a reflexive movement like breathing air or drinking water.The reason is that when we're in a state where we can be monitored, where we can be watched,our behavior changes dramatically… There are dozens of psychological studies that prove that when somebody knows that they might be watched,the behavior they engage in is vastly more conformist and compliant.’

‘What made him so excited about this discovery was that that would mean that the prisoners would have to assume that they were being watched at any given moment,which would be the ultimate enforcer for obedience and compliance.’

It is this psychological aspect of being watched (or fear of being watched) all the time that limits us as individuals, and is therefore a powerful tool for any who would oppress us,

This is a fact well known and exploited long before ubiquitous surveillance technology became available,

‘The Abrahamic religions similarly posit that there's an invisible, all-knowing authority who, because of its omniscience,always watches whatever you're doing,which means you never have a private moment,the ultimate enforcer for obedience to its dictates.’

What his various examples show is that surveillance is the friend of tyranny,

‘What all of these seemingly disparate works recognize, the conclusion that they all reach,is that a society in which people can be monitored at all times is a society that breeds conformity and obedience and submission,which is why every tyrant,the most overt to the most subtle,craves that system.’

Surveillance is a tool of oppression that attacks our most primal notions of freedom,

‘When we allow a society to exist in which we're subject to constant monitoring,we allow the essence of human freedomto be severely crippled.’

Greenwald then goes on to note that our common sense understanding of what ‘doing bad things’ means, is not shared by our rulers,

‘For them, "doing bad things" typically means doing something that poses meaningful challenges to the exercise of our own power.’

In his concluding remarks Greenwald returns to the central thrust of his argument: that mass surveillance fundamentally suppresses our freedom,

‘But the most important reason is that a system of mass surveillance suppresses our own freedom in all sorts of ways.It renders off-limits all kinds of behavioral choices without our even knowing that it's happened.

He finishes with a famous quote by Rosa Luxemburg,

‘"He who does not move does not notice his chains."We can try and render the chains of mass surveillance invisible or undetectable,but the constraints that it imposes on usdo not become any less potent.’

We fully encourage any readers who have ever thought they have nothing to hide, and so have nothing to fear (or who have ever argued with someone who holds these views) to watch the lecture or read the transcript, as Greenwald makes a compelling and impassioned defense for the necessity of privacy.