Perimeter 81 is a security network management platform that offers businesses a modern cloud-based alternative to the traditional corporate VPN model. It was developed by SaferVPN, which has now been acquired by US umbrella company J2 Global, but the Perimeter 81 brand remains in the hands of its original owners.

They also struggle to remain secure when confronted with challenging innovations such as the trend for Bring Your Own Device (BYOD) and are inflexible when it comes to unifying access to resources hosted on multiple platforms – such as traditional physical servers, private cloud storage, mobile devices, and the Internet of Things (IoT).

We cover all of this and more in this in-depth Perimeter 81 review.

A 20% discount is available for annual purchases. There is no free trial, as such, but there is a 30-day money-back guarantee. You can also request that staff members show you a 30-minute one-to-one demo of the product.

Perimeter 81 provides all the advantages of a traditional corporate VPN, including secure remote access to corporate intranet resources and protection when accessing resources over insecure public WiFi networks - all without the need for expensive physical servers and the highly qualified staff required to run them.

It also includes the following features:

For Finance companies, Perimeter 81 keeps critical financial data safe against cyber threats by securing on-site and on the go access to sensitive data and organizational resources, hiding said resources from the public Internet.

Using the handy web portal, multiple networks can be deployed, each with their own permissions. These networks can be connected to a central office, interconnected with each other or with cloud services such as AWS, Google Cloud, Azure, and other SaaS services, using IP whitelisting.

Access to company resources can be managed via the web interface, providing individuals or groups with seamless Active Directory, Okta, GSuite, and Azure AD integration.

DNS filtering is a feature we see more and more in VPN clients. Usually, it's quite basic - simply blocking known ad and malware domains based on freely available blocklists (which is a tactic that can be quite effective).

Perimeter 81 has taken this a step further, however, by introducing advanced DNS filtering that gives you fine-grained control over what content is filtered. Besides simple whitelisting and blacklisting of domains, you can filter by a selection of pre-defined categories. 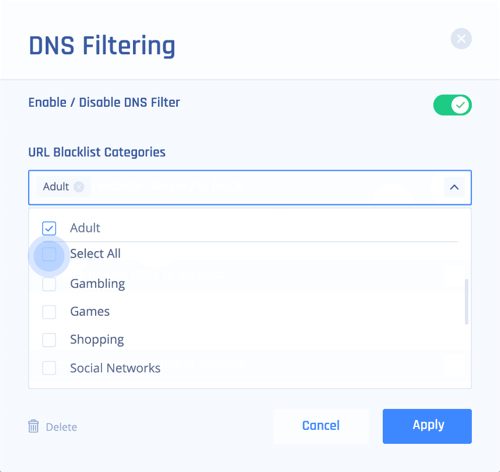 As well as blocking malicious websites and phishing domains, this type of DNS filtering is particularly useful for businesses that wish to restrict content accessed on company or personal devices (BYOD), and for preventing distractions in the workplace.

We only have very early speed test results at the present time. Based on these, Perimeter 81’s speeds are not terrible, but they are not very exciting, either. Raw Average / Max burst speed results are 51.1 Mbit/s / 282.5 Mbit/s, with a weighted average score of 27.01 Mbit/s.

Results have been steadily improving over the last few days, though, so may still improve markedly before leveling out. We will update this article as required.

Getting Started with the Service

Perimeter 81 makes it easy for IT managers to deploy the service across their team members. Simply invite team members, who will receive an email invitation to download the Perimeter 81 client software on a wide range of platforms.

At the heart of Perimeter 81 is the web portal that allows you to manage team members, servers, and permissions. It also allows you to monitor your team’s engagement with the VPN platform.

The Team tab gives you an overview of all team members. From here you can invite new members and see when team members last logged on. You can also assign them “roles” within your organization, each of which grant team members a different set of permissions. 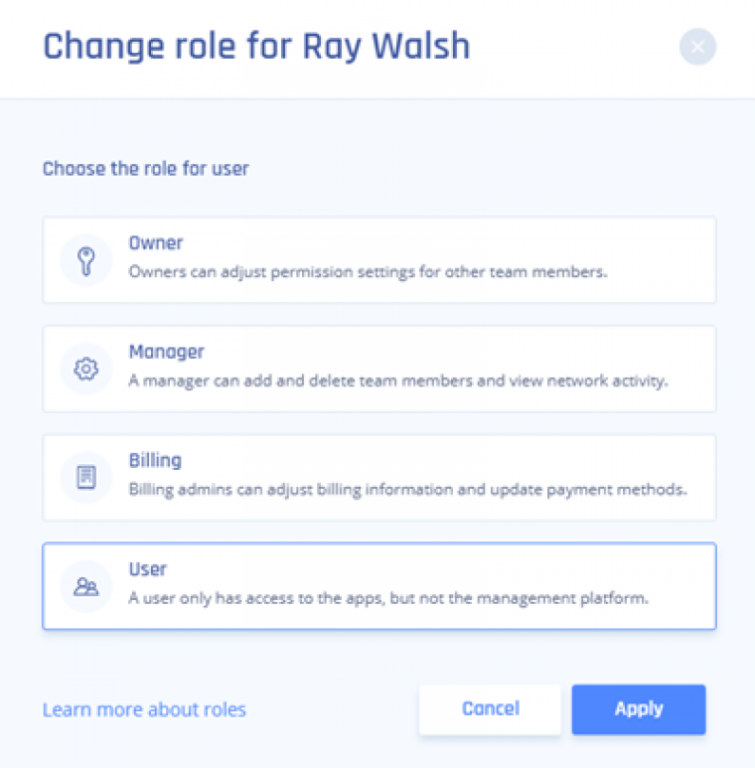 Arguably, the coolest feature of the service is the ability to create on the fly private VPN servers. These are software VPN servers run on virtual machines (VPS instances), with the VPS hosting provider largely chosen based on where its private server is located. 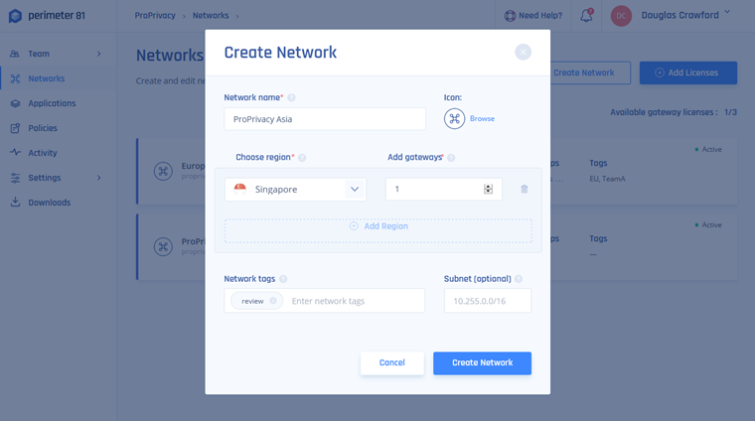 Multiple servers can be created in the same location, or in various locations around the world. It is currently possible to create private servers in various US locations, Toronto, Amsterdam, London, Frankfurt, Singapore, Bangalore, Israel, Paris, Sydney, and Tokyo.

If you need another server, it only takes a minute to purchase a new license. Or, you can remove one server and create another on the same license. Once a server has been created, it takes around ten minutes to become active.

Private servers can act as secure gateways to corporate resources. Instructions are provided for connecting to LAN resources through a firewall, in addition to various private cloud resources such as Amazon Cloud Services (AWS), Google Cloud Platform (GCP), and Heroku Private Spaces.

AWS and CGP, for example, can be accessed by whitelisting incoming connections from the private server or setting up IPSec Site-to-Site VPN from those cloud services to Perimeter 81.

The Activity tab provides administrators with a detailed and customizable overview of their team’s engagement with the platform. 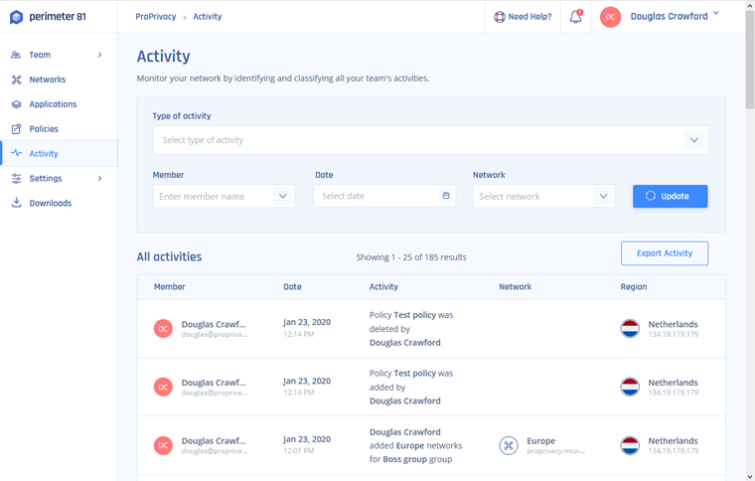 Overall, we are impressed by the Perimeter 81 cloud management platform. It provides a flexible and intuitive way to create VPN servers on the fly and then uses them to control access to a wide range of company resources.

The team apps for Windows, macOS, and Linux (.deb) are all very similar to each other. 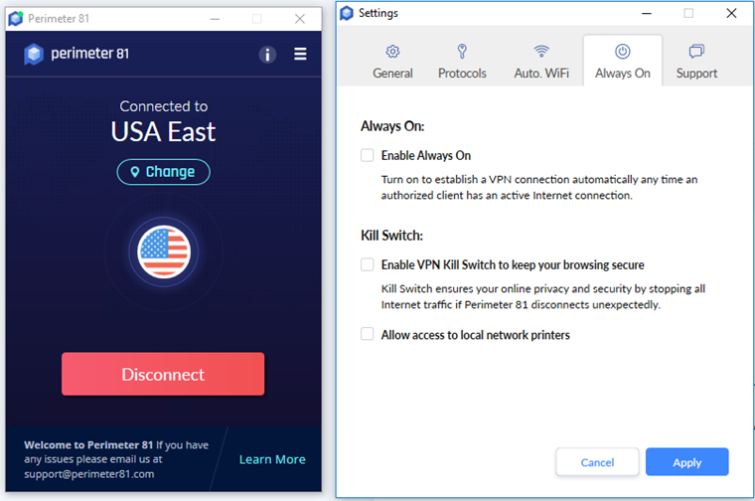 Each one supports either the OpenVPN or IKEv2 VPN protocols, while the Windows and macOS apps feature a kill switch to shut things down if the internet connection drops and “Auto WiFi,” which turns the VPN on when you connect to an unknown and potentially insecure WiFi network. 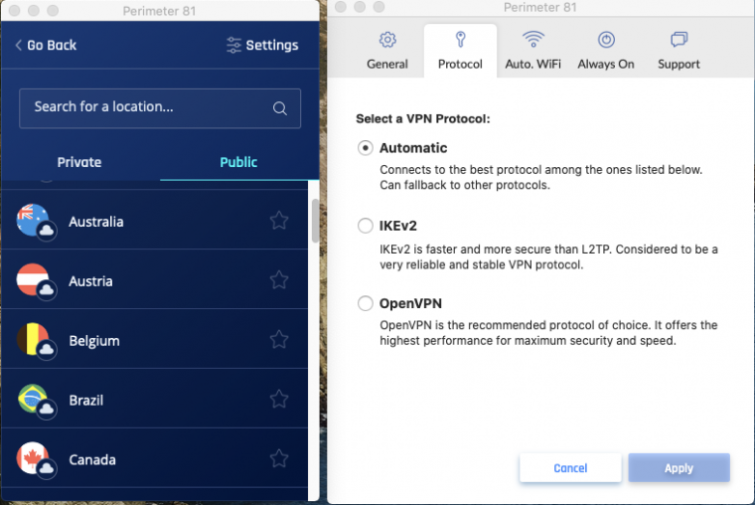 Team members can connect to your company’s private VPN servers, or to a large network public servers. In the past, Perimeter 81 used the SaferVPN network, and despite SaferVPN now being owned by a different company, not much appears to have changed in this regard (although we could be wrong about this). Whatever the situation, Perimeter 81 team members can connect to public VPN servers in 35 countries. 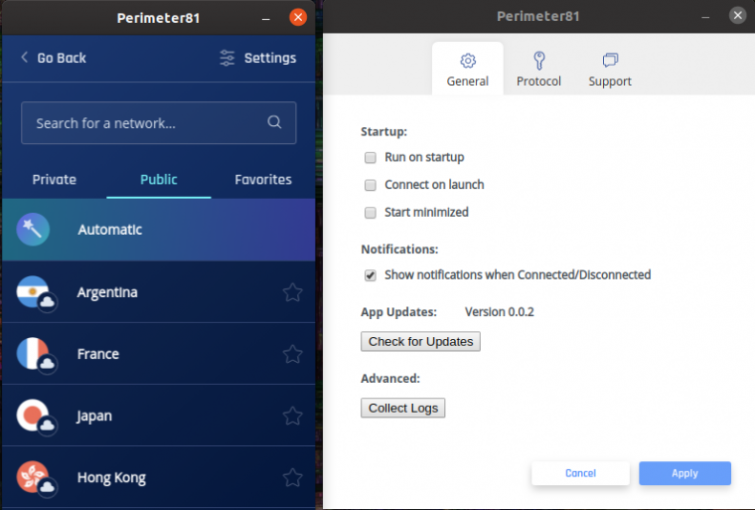 The Android and iOS/iPadOS apps use the same UX design as their desktop cousins, and, unsurprisingly, are very similar to each other. 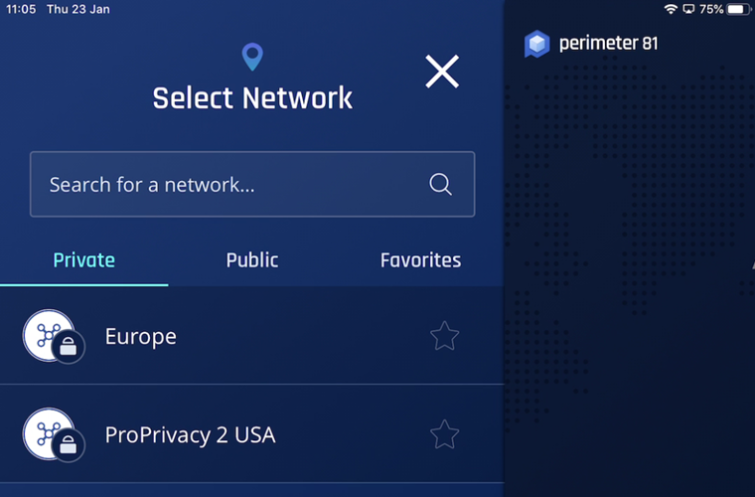 Both apps feature “Wi-Fi Security” (called Auto WiFi in the desktop apps), but the Android app has a user-selectable kill switch. The iOS app has no such option, but Perimeter 81 tells us that one is baked-in, anyway.

The Android also allows you to switch between OpenVPN and IKEv2, while the iOS app uses just IKEv2.

There is extensive documentation on the website, including examples of how Perimeter 81 can benefit various kinds of business.

Confusingly, support can be contacted via a Live Chat client, but the response is email only. This is particularly frustrating given that Perimeter 81 describes its responses as both “instant 24/7 support” and within one day for regular Small Business customers.

In practice, with our trial account, we received email replies from anywhere within an hour to a whole day. We are pleased to say the quality of the responses was high, though.

Although Perimeter 81 has distanced itself from the SaferVPN brand, this VPN is based in Israel, which has strong data protection laws that strictly and specifically limit the government’s ability to spy on personal data.

On the other hand, Mossad is a close ally of the NSA, and Israel is known for the robustness of its cyberdefense operations and for its cooperation with the NSA in its mass surveillance operations.

On balance, though, we think Israel’s strong data protection laws make it a fairly privacy-friendly location.

A lot of data relating to the use of Perimeter 81 features is logged:

1. - Admin actions – We record all admin actions including inviting new team members, deleting a team member, changing team permissions, creating new cloud-based access gateways and any other action that can be taken on our management portal.

2. – Team member actions – We record connection and login timestamp, login success/error, location of the device that was connected, the hostname of the connected devices of the team members, the server the business user has been connected to and the timestamps of the connections.”

These settings are highly secure and meet or exceed our minimum recommendations.

Perimeter 81 is an exciting product that is well executed. Small to Medium-Sized Enterprises (SMEs), in particular, will appreciate the ability to deploy a corporate VPN network without the high costs in terms of both hardware and skilled staff traditionally associated with such a setup.

The management console allows easy and granular control over the actions and permissions of a team, and the client software works well and is easy for team members to use. The ability to create on the fly VPN servers, each with their own permissions, and then assign team members to them in a flexible way, is a revelation.

This flexibility, though, does come at a price. As is to be expected, these software VPS instances hosted on shared physical servers do not offer great speed performance.

Overall, though, we think Perimeter 81 is a groundbreaking network management and security tool that opens new possibilities for many businesses.

Overall score: 1
Worst VPN solution ever. Doesn't even support MFA requirement for authentication (only 1 time on install). What a joke.
Show More