We've all been there, you're sat at home searching online for a cool watch - or a designer handbag for your partner - and suddenly all of your devices and apps start showing you adverts for the products you have just been looking at. You casually turn your screen away from your partner to make sure the surprise isn’t spoiled.

Someone sends you a funny video on Facebook, and without thinking you pass your phone to your partner to watch it - and they see an advert for the very thing you just bought them as a surprise gift. This might seem rather trivial (yes, I know first world problems), however, people everywhere are complaining that targeted ads are ruining their Christmas surprises.

Unfortunately, making sure you hide your phone’s screen from your partner (or somehow prevent them using your laptop until Christmas Day) may not do the trick. This is because cunning advertisers sometimes target  IP addresses - meaning that your partner may actually be getting the same adverts on his or her own device. 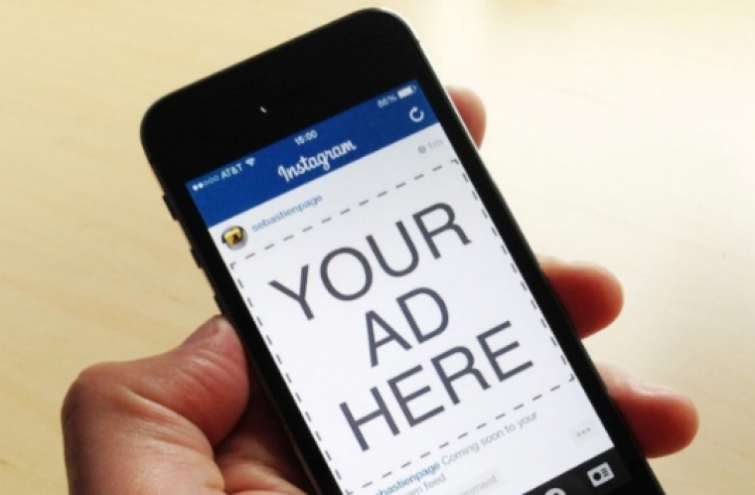 It’s not just Christmas gifts either, people are complaining that all manner of surprises are being ruined throughout the year. There will be no surprise summer getaway when you've been left sifting through ads for flight deals to Bali. Even the biggest of surprises are falling victim to an advertiser's grasp, with engagement ring adverts being served to the, as yet, unproposed to.

Although this might all seem pretty trivial, it is still incredibly annoying for anyone hoping to surprise a loved one. Unfortunately, targeted ads can also take a darker turn, inundating the vulnerable with heartbreaking ads associated with personal loss.

Don’t show me that!

Last week a woman called Gillian Brockell took to Twitter to vent her heartbreak. In her tweet, Brockell described the pain of having recently experienced a stillbirth. On returning home, any hope of using the internet to distract from her sorrow was met with waves of digital insensitivity. 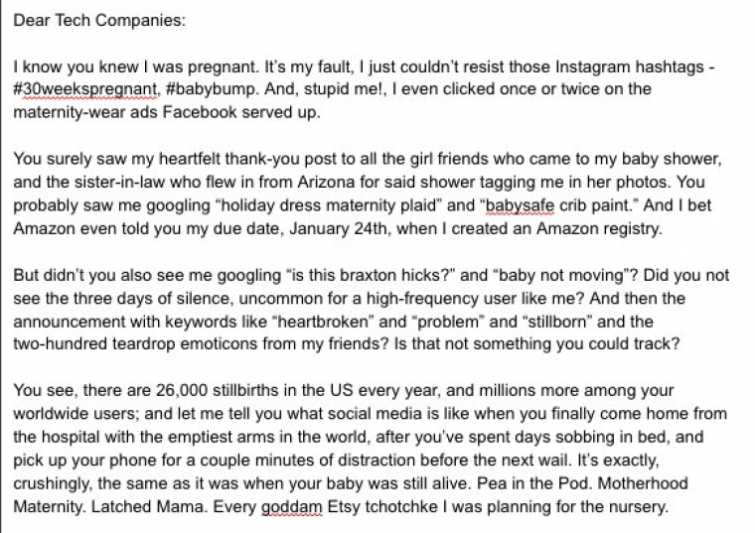 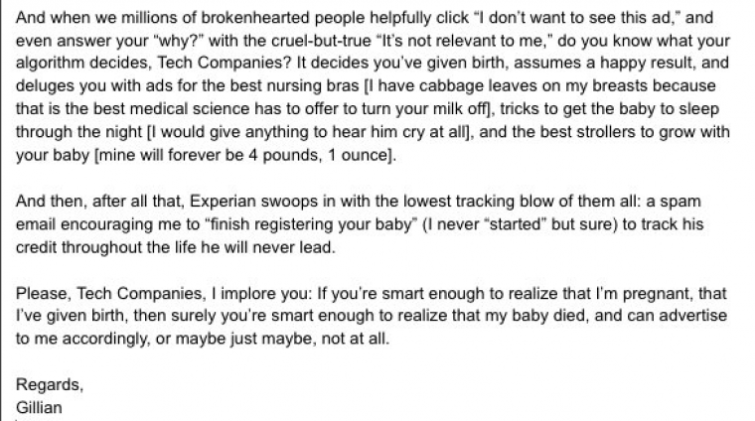 Brockell’s poignant message to tech companies is a stark reminder that targeted ads can be much more than just an irritant.

People experiencing grief, whatever the cause, do not deserve to be effectively cyber-bullied by their own technology. It is a real problem, with real-life implications. 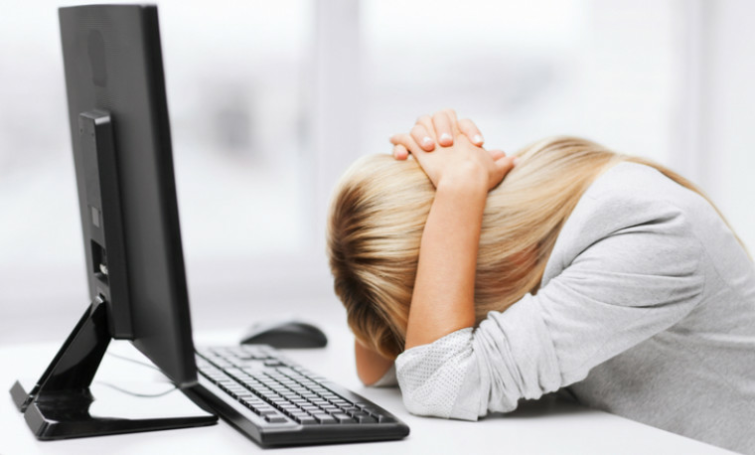 People deserve to have control over their digital footprint and especially the personalized adverts on their screen - particularly if those adverts are having a negative impact on their psychological well being. Giving people more control over these adverts provides them with the tools they need to protect themselves from unintentional emotional distress.

To Facebook’s credit, it is possible to go into ad settings, select "ad preferences” and "Hide ad topics” for "Parenting”. Facebook gives users the ability to hide potentially painful ads for either six months, one year, or permanently. Many don't feel this is enough. As Brockell explained on her Twitter feed, finding the settings is often too confusing when you’re grieving.

In addition, Brockell explained that despite updating her ad settings she was served an advert that suggested she consider adoption, which, under the circumstances, was grossly inappropriate.

This isn’t the first time that women have experienced the issue, either. In June, a British mother who lost a baby girl wrote an open letter to Facebook after she continued to be served adverts relating to babies, family, and the home - even after she had updated the ad settings in her admin panel.

In the letter, she claimed that Facebook's ads, "were unintentionally taunting me with reminders of what I’d lost."

The letter continues, "Make the way you target ads or sell data more responsive to people hiding parenting ads or similar topics. Sell us other stuff instead. I’m happy for you to use my data as long as you don’t use it to make me cry.

Facebook claims that specific case was caused by a bug that has since been fixed. However, if Brockell’s case is anything to go by it would appear that the system is far from perfect. 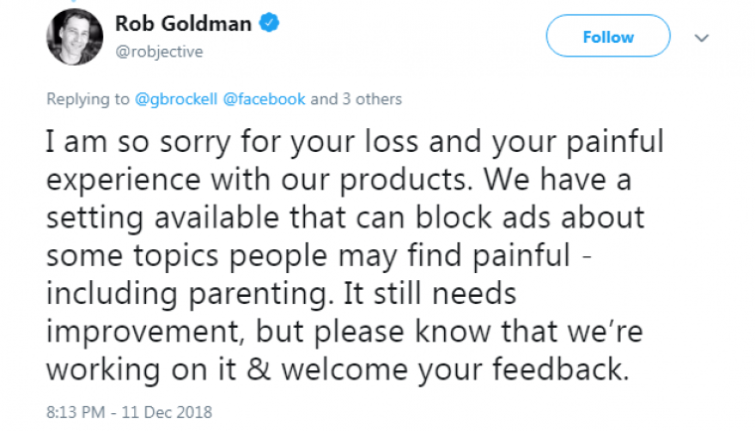 Facebook admitting that the system "still needs improvement” is all well and good, but with 24,000 stillbirths occurring in the US each year, it's likely that Facebook has received complaints of this nature before. This makes it particularly disappointing that when I asked Facebook for a timescale of improvements to be rolled out - it refused to provide more information.

My personal preference would be for targeted ads relating to childbirth to be completely off limits. I would go as far as to say that governments should consider banning them full stop, considering the psychological anguish and emotional distress they can cause. Interestingly, this is also Google’s stance.

"Google does not collect information related to health conditions or personal hardships and we don't allow advertisers to target / personalize ads based on those categories which include pregnancy. NB pregnancy is considered a health condition.”

It is a shame that Facebook can’t update its advertising policies to be similar. After all, Brockell says: "We never asked for the pregnancy or parenting ads to be turned on; these tech companies triggered that on their own, based on information we shared." In Brockell's opinion, if adware is able to learn to turn ads on - it ought to be able to use trigger words like "stillborn” to stop the ads just as quickly.

Losing a baby isn't the only example, there are plenty of other times when adverts can rub virtual salt into real life wounds. Imagine been served adverts for engagement rings or wedding venues after being jilted at the altar.

At the end of the day, targeted advertising is intrusive and using people’s data to create databases to target ads is wrong. Advertising is a rotten industry. People know what they want and are capable of seeking out the products they desire without being force-fed adverts all day. It's not even necessarily effective, a system that serves you an advert for something you've just bought or no longer need is senseless - especially when it is hurting us in the process.