In December 2017 the Federal Communications Commission (FCC) repealed the United States’ net neutrality rules. The changes came into effect without any challenge from the House on Monday 11 June 2018

Following a Senate vote on 16 May to reverse the FCC’s decision, many hoped the House would follow suit and intervene to save this most fundamental and foundational tenant of the internet. Such hopes, however, were always a wishful fantasy.

Just three Republican senators joining Democratic Caucus were enough to swing the Senate vote in favor of net neutrality. In the House, however, Republicans enjoy a 235-193 advantage.

As a result, house speaker Paul Ryan declined to schedule a vote on the issue at all. In theory, a vote could have been forced if a majority of House Representatives had signed a Discharge Petition. But, of course, in the Republican-dominated House no such majority existed. And even if a Discharge Petition had been signed, losing the actual vote was a foregone conclusion. 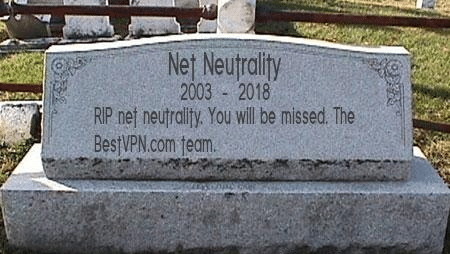 Despite being officially repealed, the fight for net neutrality is not yet over. Indeed, there are a number of reasons for continued hope.

The mid-term elections due to be held in November this year are likely to be fiercely contested, and embattled Republican candidates are sure to be aware that they could pick up extra votes by backing strong net neutrality rules.

Despite his well-known antipathy to net neutrality, President Trump is also an unpredictable populist who is not above doing an about-turn to keep his supporters happy.

Individual states can and are defying the federal-level FCC ruling by implementing State-level legislation to enact strong net neutrality protections.

In addition to this, New York Governor Andrew Cuomo has shown strong support for net neutrality, and the State is considering following California’s lead.

It is worth stressing that these are no ordinary States. Voters in Washington, California, and New York make up 17% of the entire US electorate. And where they lead, it is very likely others will follow.  As it is, a whopping 21 states are currently suing the FCC over its net neutrality ruling.

Claiming that a "patchwork" of different state laws will burden ISPs, the FCC stipulated as part of its repeal order that individual states can not pass legislation reversing the repeal. That some have done so anyway, and more are likely to, will inevitably lead to a series of legal challenges. It remains far from clear as to whether the FCC has the legal authority to make any such stipulation.

Furthermore, the FCC is itself already the subject of no less than 12 lawsuits against it, and more challenges are expected.

Protestors advocating for net neutrality rally on the streets of Philadelphia, Saturday, January 13, 2018.

So what is the worse that can happen?

Net neutrality is the idea that all internet traffic is treated equally by Internet providers (ISPs) and governments. It means "not discriminating or charging differentially by user, content, site, platform, application, type of attached equipment, and modes of communication.”

In other words, big money will be permitted to ride roughshod over the interests of the common people.

ISPs are not be trusted

Supporters of the FCC (mainly lobbyists for the likes of Comcast, Verizon, and AT&T) say that such claims are mere scaremongering and that ISPs can be trusted to self-regulate and protect the interests of their customers.

If nothing else, they say, free market competition will ensure good behavior. After all, if customers don’t like what their ISPs is doing they can simply change ISP.

This may be true in urban areas where internet customers do indeed have a range of choices but ignores the fact that in much of rural America the big ISPs hold a virtual monopoly on internet access. Without strong net neutrality rules, big ISPs can do pretty much whatever they want and customers will have no choice but to suck it up.

Prior to Obama's net neutrality legislation:

It is also worth remembering that the ISPs who lobbied so hard for an end to net neutrality are the same ISPs who in 2017 successfully lobbied the FCC for the right to sell or share customers’ detailed web browsing history and geolocation data with advertisers and partner companies.

To avoid tracking we recommend that use a VPN. Check out our AT&T VPN guide for more information about how this can help.

The battle for net neutrality in the United States is dead, but this war is far from over. If you want to help, then Fight for the Future (FFTF) is continuing its mission to put pressure on the House to reverse the FCC’s decision. Everything you need to help in this fight is available here.