Digital privacy is far too often an afterthought, the lack of which is disguised with convenience and ease-of-use. But what if privacy and security were at the foundation instead of something haphazardly tacked on? And what if privacy didn’t have to come at the expense of a robust feature set? These are the questions that Mass Luminosity CEO Angel Munoz asked himself when looking at the sorry state of video conferencing, believing he could do better with Beacon.

Since pre-registration for Beacon launched on April 24th, Angel and his team have been surprisingly candid with ProPrivacy about the upcoming service, embracing the natural skepticism that emerges when combining the words "free” and "private.” Now, over 27,500 people are lined up to trial what’s to come as Beacon enters beta, and there’s a lot to unpack.

Although privacy and security are unquestionably the headline features of Beacon, it quickly became apparent during our weekly demos that Angel’s mantra was "but wait, there’s more.” Although he admits that "people are becoming more and more aware of the value of the data they give for free,” there is an understanding that Beacon needs to go further than its rivals, packing either equally good or better quality and features to entice the less privacy conscious.

Keen not to repeat the same mistakes as Zoom, Beacon boasts true end-to-end encryption (e2ee) for all voice and video calls. These are conducted peer-to-peer, and only those in the call have access to the decryption keys, which are discarded the moment a call is over and replaced when a new one is created.

It’s important to mention that Beacon is closed source, which means we usually have to take a company at its word that nothing shady is going on behind the scenes. And although Mass Luminosity has earned a lot of goodwill for its treatment of GTribe - its gaming-focused social media website - it knows that this isn’t enough. 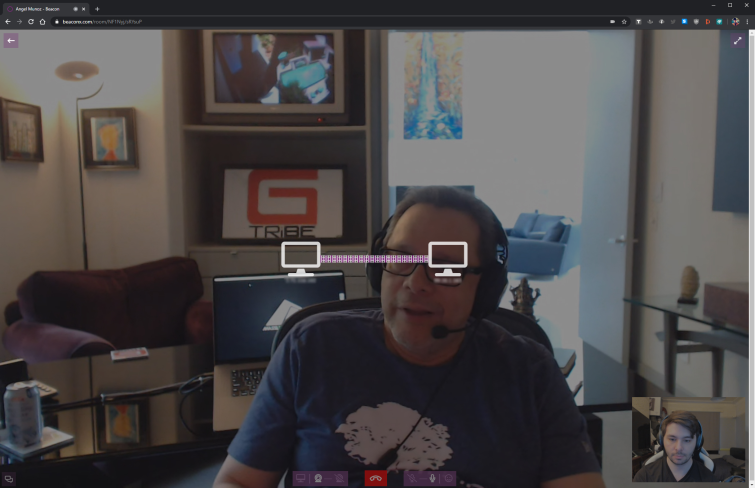 This is why you’ll be able to see the encryption process in real-time at the click of a button in the top-left corner. While IP addresses were present in the alpha version and blurred out in the image above, these are securely masked in the beta.

And yes, true end-to-end encryption will be available for free, unlike its competitors.

By this point, everyone should be using a password manager to give each of their accounts strong, unique passwords. But just in case, Beacon goes above and beyond by checking your password against a database of leaked passwords to prevent you from leaving your account vulnerable.

And even if your password ends up in the wrong hands, you can lock your account down with time-based one-time password (TOTP) two-factor authentication, ensuring that no one gets in without your say so. Better yet, this is likely to transform from an optional feature into a mandatory step closer to launch.

It's optional during beta testing, but it's too important not to make it a requirement as soon as possible.

Many of us here wouldn’t think twice about trading quality in for privacy, but naturally it isn’t a sacrifice that most are willing to make.

Without a single stutter, both the voice and video never missed a beat.

In order to make true converts of other platforms, Beacon has an increased focus on providing scalable resolutions to suit all types of connections and hardware, preventing disconnects, and hardware acceleration for the best possible visual capabilities.

Not only can Beacon adjust between 480p to 2,160p resolution, otherwise known as 4K, it enables higher bandwidth participants to help those with shakier connections for a stable and successful call for everyone.

From personal experience, video calls were undoubtedly crystal clear, but it was the voice quality that stood out to me. Granted, it does depend on what microphones and webcams your peers are using, but without a single stutter, both the voice and video never missed a beat.

Much like privacy, accessibility is a consideration that comes far too late into development and is regularly solved with add-ons and plug-ins. Instead of sending people away to search for answers externally, Beacon has the built-in ability to transcribe what’s being said much like subtitles from a movie.

We're in the business of helping people.

Transcription happens in real-time, meaning those that are hard of hearing or deaf shouldn't miss a thing. And better yet, text only appears with consent, so there is no sneaky invasion of privacy without your knowledge. 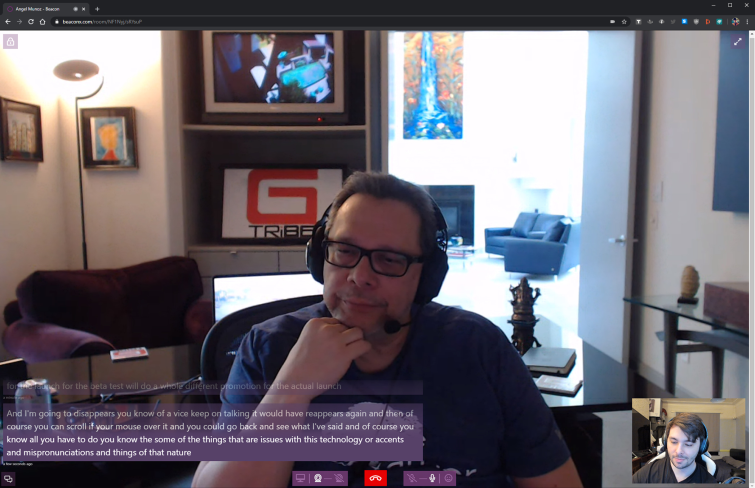 This feature is enabled by Mass Luminosity’s SAMI artificial intelligence, and while it isn’t perfect and can misquote like any transcription service, it will only get better with time. This should be less of a problem when people enunciate and talk a little slower, but I am intrigued to see how it handles more regional accents outside of the United States.

Interestingly, it does manage to filter natural breaks in speech, preventing the 'ums' and 'ahs' from appearing on your screen. As a writer, this makes me wonder just how influential Beacon could become in journalism for interviews, potentially replacing the need for external transcription services.

Beacon uses 3D Sound Positioning. Currently, this utilizes binaural audio clips that are recorded on a microphone resembling the human ear, allowing the technology to better position the sound directionally through your speakers or headphones.

One of the more fun aspects of this is using pre-recorded sounds as a form of Audio Emojis, with 1,000 sound clips already licensed. But this technology holds the potential for much more – things that are currently in development.

Angel debuted this technology to me without warning, just to see me turn to my right, believing that someone was knocking on my door. I initially described the feeling as ‘scarily real’, but it goes beyond simply pumping sound through the left or the right speaker. Combined, it can make sound fuller, emulating somewhat of a surround sound effect. It’s certainly one to experience for yourself.

Mass Luminosity plans for Beacon to be available across multiple platforms, eventually including Windows, Android, Mac, and iOS applications. However, at the beginning of the beta period, it will just be available on browsers. Smartphones users need not worry, however, as the service works just as well from mobile browsers as it does from desktops, with a sleek, uncluttered interface: 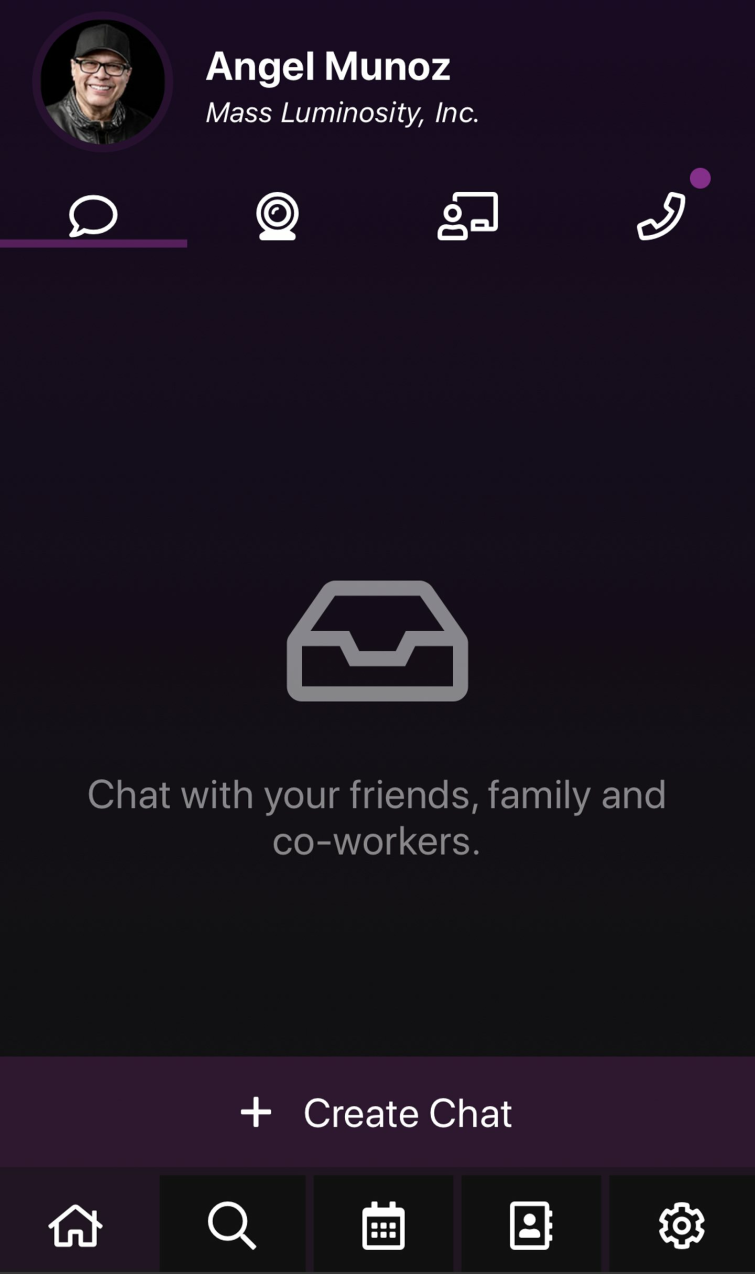 Regardless of what you use, Continuity is a tried-and-tested feature that allows you to swap between devices at the click of a button, transferring your video and voice feed from one platform to another.

I’ve yet to see this in action on Beacon but have experienced it first-hand on GTribe’s video calls, and it works exactly as advertised.

Beacon enables you to share files with your friends and colleagues by dragging and dropping it onto the screen. Dropping it over yourself will automatically share the file with everyone involved in the call, while dropping it on any one person only sends it to the individual.

The beta will initially use a cap of 2 GB for file transfers, but Teodor explained that this could be increased in the future thanks to Beacon's peer-to-peer technology. Currently, most of the limitations surrounding the feature are imposed by third party browser clients, meaning that the desktop and mobile applications could be faster when they launch.

I will be putting this to the test during the beta to see what restrictions it has, but it does look to be an easier way of distributing files personally.

Absolutely everything is encrypted end-to-end

Whether you use your webcam, stick to voice, send a message, or share your screen, everything is encrypted end-to-end, peer-to-peer. This is the base of everything that Beacon does, keeping your information away from third party servers and protected from prying eyes.

And to say that there’s a lot more to look forward to would be an understatement. Beacon will eventually support built-in recording, which is only activated with consent from all parties, and there are talks of making money transfers as easy as file transfers.

Anything can happen during this testing period, with new features introduced and planned features potentially not seeing the light of day. But Angel and his team will continue to keep an open dialogue about the development throughout.

My Impressions of Beacon

The timing of Beacon seems nothing short of miraculous, as Zoom’s several controversies have left the service tarnished and the world continues to place emphasis on remote employment despite lockdowns easing worldwide. Of course, this is simply a coincidence, with years of development already behind the platform. If anything, this just serves as a reminder of how long we’ve willingly traded our privacy without question.

Instinctively, it’s easy to feel like there’s a catch. ProPrivacy has often drilled in the mantra that if it seems too good to be true, it probably is, but Beacon does seem worthy of being called a "next-generation video and voice conferencing service,” even in its early stages.

There’s a level of polish to it that could be considered missing on well-established alternatives, particularly when using Chromium-based browsers. Other browsers, such as Firefox and Safari, will be more optimized throughout the testing period, but don’t represent the intended experience just yet.

Impressively, Angel has assured me that there won’t even be intrusive advertisements present. You will not have to wait an allotted amount of time before you can skip an ad, and you’re unlikely to see too much clutter, either. As showcased on GTribe, Mass Luminosity works by using strategic partnerships, which often results in a quick ‘brought to you by’ with an accompanying logo.

Some will be concerned that Beacon currently only supports up to six people, but with no time limit to worry about, plenty of features, and unrivalled security and privacy on a free service, it looks to raise the bar significantly from where it is now. It already stands taller than Zoom, Google Meet, and Microsoft Teams, although those whose threat model excludes closed source services will have to stick to open source alternatives.

We are sure to find out more as the development of Beacon progresses towards an estimated September launch, however it's worth remembering that this date is tentative and could change.