One thing is for certain, comedian John Oliver is passionate about net neutrality. Urging his viewers to bombard the Federal Communications Commission (FCC) website with comments has resulted in a tsunami of complaints, which has crashed the site. This, apparently, is not the first time that an impassioned Oliver’s plea to his audience has caused an outage at the FCC.

Back in 2014, the Democratic-controlled FCC bandied about questions and theorized about Internet Service Providers (ISPs) charging for things like faster service. John Oliver's impassioned pleas to his audience to get involved caused the FCC site to crash. Since then, the FCC has upgraded the site, but not well enough to cope with the latest deluge.

The HBO network host is not circumspect about who the object of his FCC fervor is. Back then, he referred to the FCC chairman, Democrat Tom Wheeler, as a “dingo” for even contemplating giving ISPs such pricing power. Perhaps in part as a result of Oliver’s rants on the subject, Wheeler eventually issued rules outlawing paid fast lanes.

Regarding what John Oliver thinks about today’s FCC and its Republican chairman, Ajit Pai, one only need look at the URL he is directing his disciples to in order to protest the proposed rules changes  - gofccyourself.com. The previous net neutrality debate drew four million comments, but there's still plenty of time to break that record. Already 80,000 comments have been received in just a couple of days. 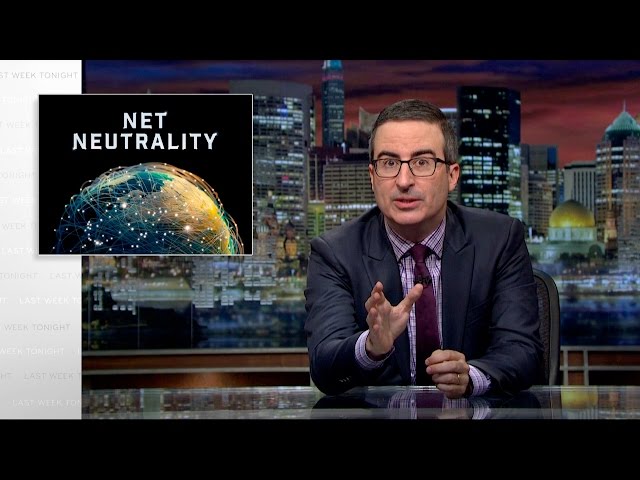 The rhetoric has been raised because the ante has been raised, too. Now, the debate is over whether net neutrality rules should exist at all. At the very least, the rules reclassifying the broadband companies as utilities under Title II will surely be reversed. For his part in the saga, Pai has stoked passions with outrageous oratory of his own.

He minces no words when he says that net neutrality rules' "days are numbered," and that he intends to bring a "weed whacker" to various FCC regulations - language that Oliver opines is "pretty ominous," like “serial killer talk.” It is certainly not language befitting a government agency chairman. Further, Oliver added:

"When the Code of Federal Regulations looks out its window at night, there's just Ajit Pai, standing silently holding his weed whacker waiting for his chance."

Oliver cited the fact that Pai was a Verizon corporate lawyer, and that his portraying of Wheeler’s rules as stifling investment in infrastructure was untrue:

"What he's essentially suggesting there is that as soon as Title II came in, companies said, 'f--k it, investing in infrastructure is way too difficult now, we're not doing it anymore. In fact, pull some of the cable out of the ground, we're going back to the telegraph."

To bolster his case, Oliver alluded to a past event where Verizon, AT&T and T-Mobile prevented Google Wallet from being installed on their phones because it directly competed with their own payment app system, Isis.

The problem facing adherents of a truly free internet is that their voices are too few, and their outrage doesn’t seem to be reflected at the ballot box when election days roll around. Unfortunately, the viewership of TV cable outlets is comparatively small, and very liberal, so doesn’t reflect the broad popular consensus. If it did, then we wouldn’t be in this predicament now.

The reasons for this are far too many to address in this article. Suffice to say that the net neutrality issue should be a bi-partisan one. After all, whether you’re a Democrat or a Republican, a liberal or a conservative, you have a vested interest in a fast, free, innovative internet.

Now that you’ve been alerted, and are hopefully sufficiently riled up, what can you do to save net neutrality? US citizens should write to their elected representatives in Congress. You can Google their contact info or use the Electronic Frontier Foundation’s tool to do so. US citizens can also make their opinion known by leaving a comment on the FCC’s website by: